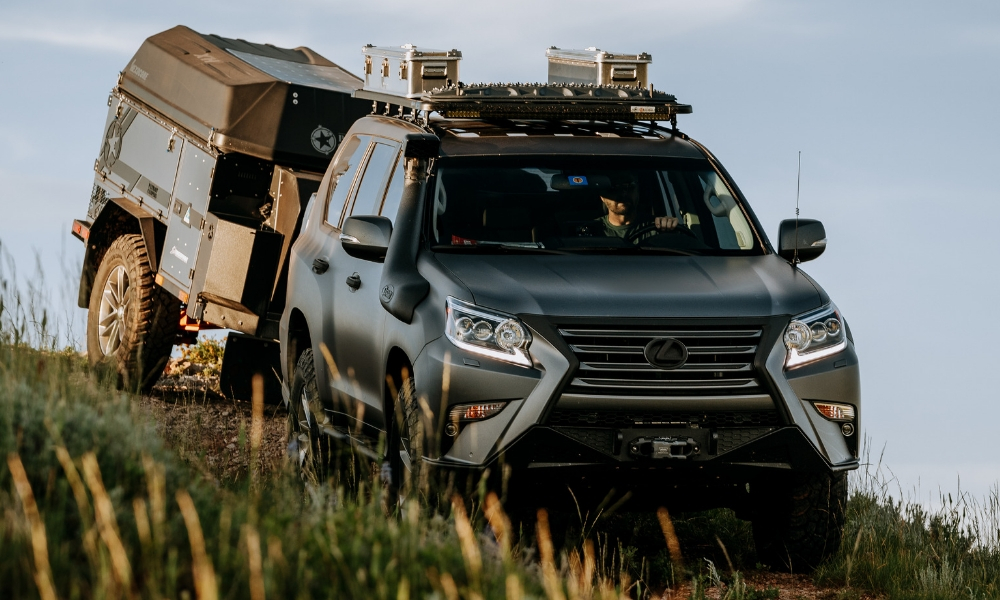 While it’s akin to the Toyota Land Cruiser, the Lexus GX isn’t nearly as capable on trails. The Lexus GXOR Concept is supposed to correct the design flaws that limit the luxury SUV’s performance on the dirt, and it’s honestly compelling.

Perhaps the biggest problem with the Lexus GX is the front bumper that hangs down way too low. That’s fixed with a CBI Custom Stealth bumper that also has a Warn winch mounted inside. Other upgrades you’d expect to see on a rig like this includes shocks with remote reservoirs, uprated control arms, a 50-inch light bar, big roof rack, frame sliders, full skid plates, and tires more appropriate for trails. There’s also a snorkel, which seems to be such a controversial mod these days.

This concept isn’t just for going on short jaunts, but has been created with overlanding in mind. The ham radio and 160-watt solar panel mounted to the roof, plus a refrigerator mounted in the cargo area help in that area. So does a Patriot Campers X1H trailer, which at the press of a button opens to create an instant pop-up shelter, plus it has a slide-out kitchen complete with a sink. Yes, it’s tough “roughing” it.

You could mimic this build, but be prepared to shell out big bucks. A Lexus GX isn’t exactly cheap with a starting price of about $52,000. Oh, and that nifty trailer starts at a whopping $46,990.