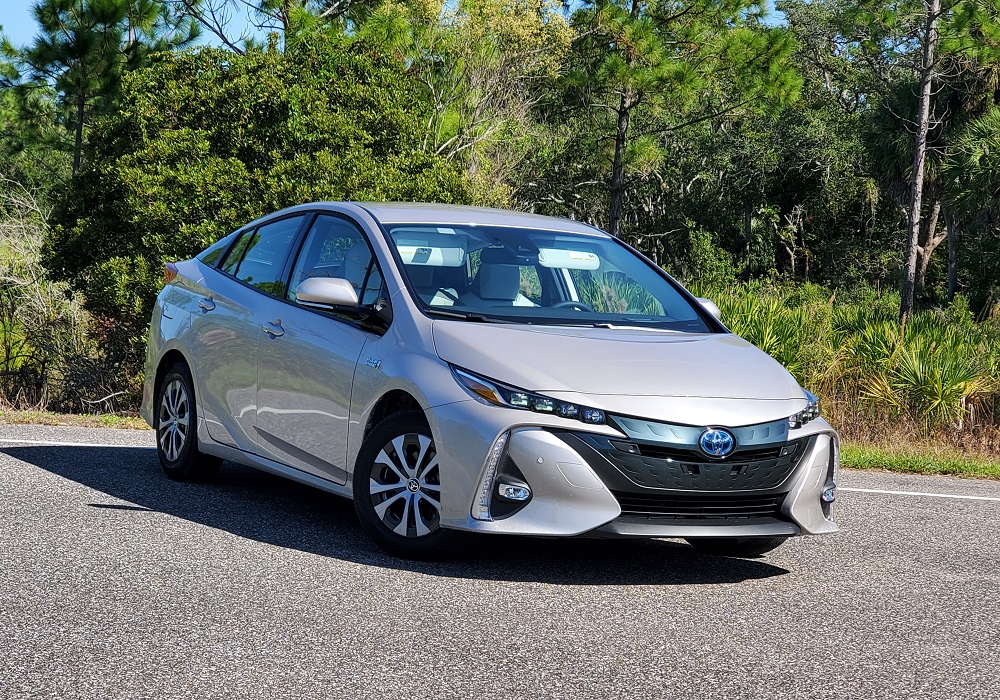 Plug-in hybrids offer buyers a nice steppingstone to the world of electric vehicles while automakers work on maximizing range and lowering the cost of full EVs. The 2020 Toyota Prius Prime is one of the first vehicles that comes to everyone’s mind when thinking about plug-in models. But with this segment again crowding as fuel prices surge, is it still the best option? I spent a week in a 2020 Toyota Prius Prime Limited to find out. 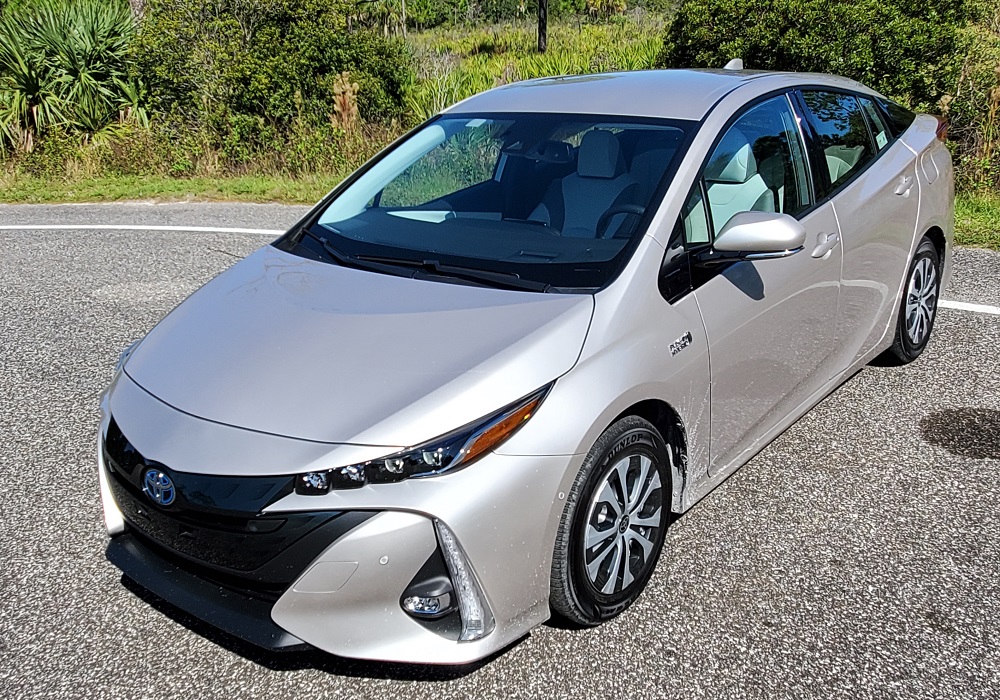 The Toyota Prius has been lambasted over its appearance, but most of the ire has been toward the ridiculously overstyled standard Prius. The Prius Prime, believe it or not, has more toned-down styling that is a bit easier to swallow.

That’s not to say the 2020 Prius Prime is a beauty. The front end looks pretty good with its sleek LED headlights, stylish grille, and shapely hood. The profile look is decent too. Around back, though, it may lack the who-thought-that-was-OK zig-zagged Prius taillights, but it is nearly as awkward with a design that seems to have drawn inspiration from DC Comic’s Hawkman and Hawkgirl’s masks. Take a moment to Google it… 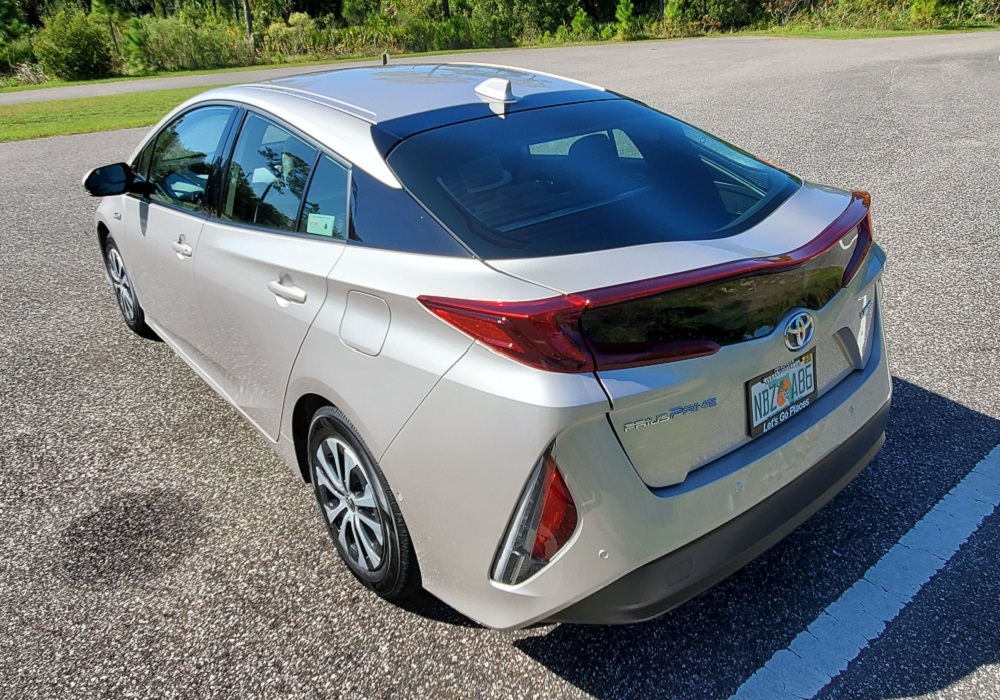 That said, the total exterior package is a nice setup.

Inside, the 2020 Prius Prime has a new look in its back seat, as Toyota wisely chose to ditch the fixed center console and add a fifth seat. Sure, the seat is tiny and is likely only suitable for a kid, but it is more logical than the console.

Up front, things are about the same in the 2020 Prius Prime. It continues with a striking two-tone look that really gives it a premium look. There is a lot of gloss-black trim that not only attracts dirt and potential scratches, but it also has a cheap-looking glitter baked into it that glimmers when the sun hits it. It looks great in the shade, though. 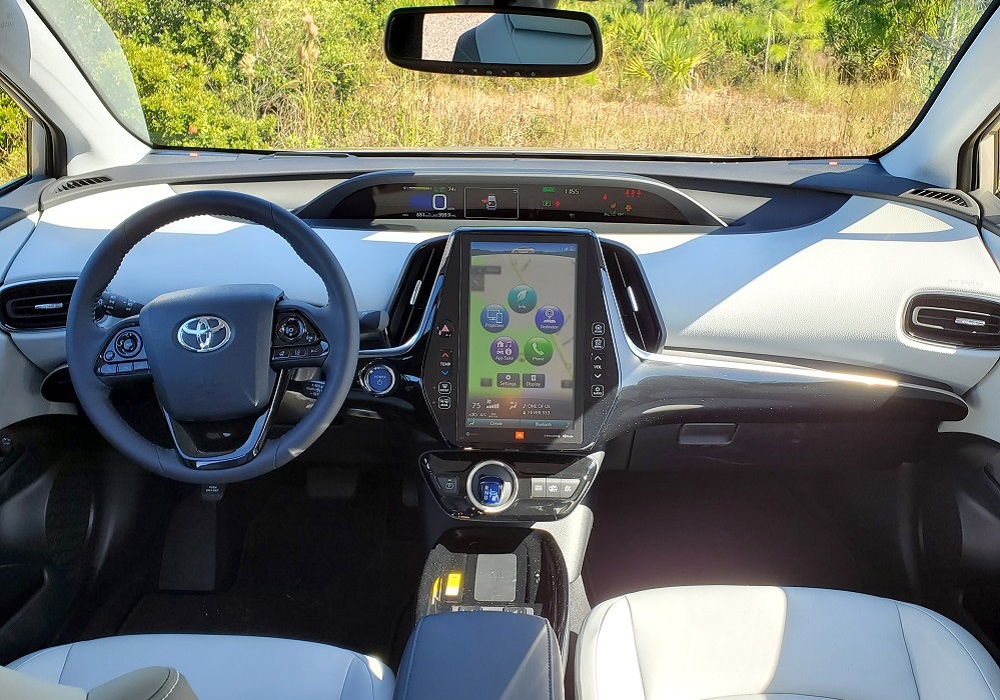 My Limited-trim tester came standard with fancy-looking SofTex® (read: leatherette) seating. This made it look great when you opened the door, but they felt off. Generally, the goal of leatherette upholstery is to feel as much like leather as possible, but these seats felt like fancy vinyl (which they are). The steering wheel was also SoftTex®, but it felt far more leather like. I’m not sure if Toyota used a thicker material on the wheel or if it’s just the smaller surface area. I have an email out to Toyota to sort this out.

The dash layout is clean with my tester’s standard 11.6-inch touchscreen handling most of the input duties, limiting its buttons. This system is nice-looking but far from perfect, which I will get to later.

Overall, the 2020 Prius Prime Limited delivers a good interior design that looks more premium than I would expect a $33,650 plug-in hybrid to look. 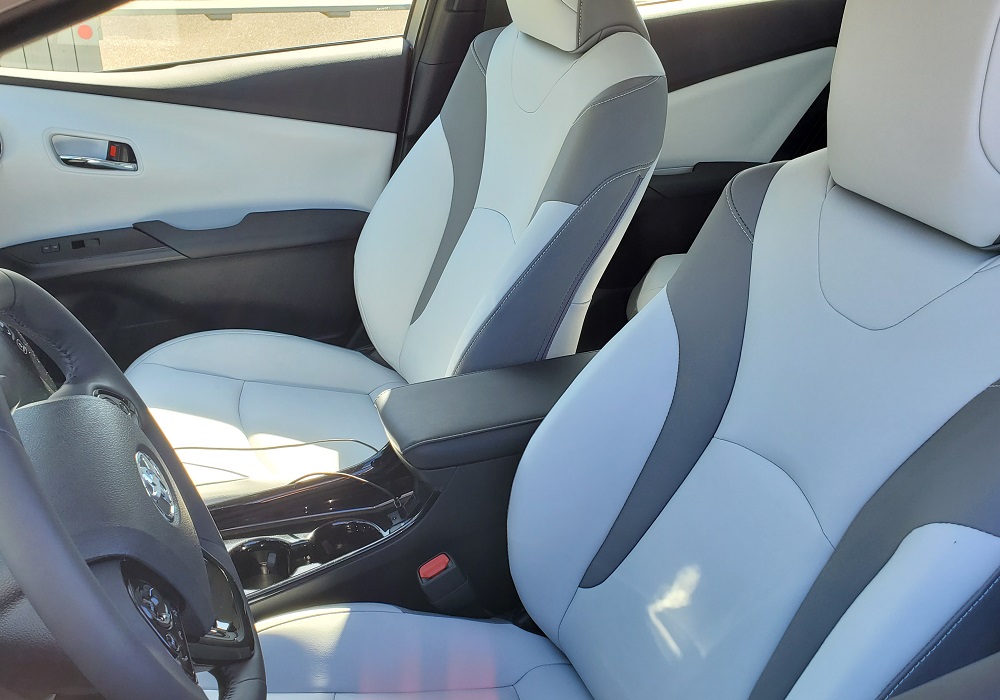 I spent a week in the Prius Prime, and I came away quite impressed by its level of comfort. The seats offered plenty of backside support on long drives, and its overall front-seat roominess was plenty for my 5-foot 7-inch frame. I would like to have a little more bolstering in the seats because the SofTex® is a little slick, but that is more of a personal preference than a flaw.

Now, about that leatherette. I mentioned above how it feels more like fancy plastic than a leather substitute, but it does a wonderful job avoiding heat absorption. Here in Florida, we still hit the 80s in November, so with the windows up, leather seats can still burn your thighs if you plop down without adjusting your shorts first. I never ran into that issue once with these SofTex® seats. I am not sure if another 10 degrees or longer daylight hours would affect that, but I doubt it. If it is an issue, the Prius Prime comes standard with remote air conditioning to eliminate the problem. 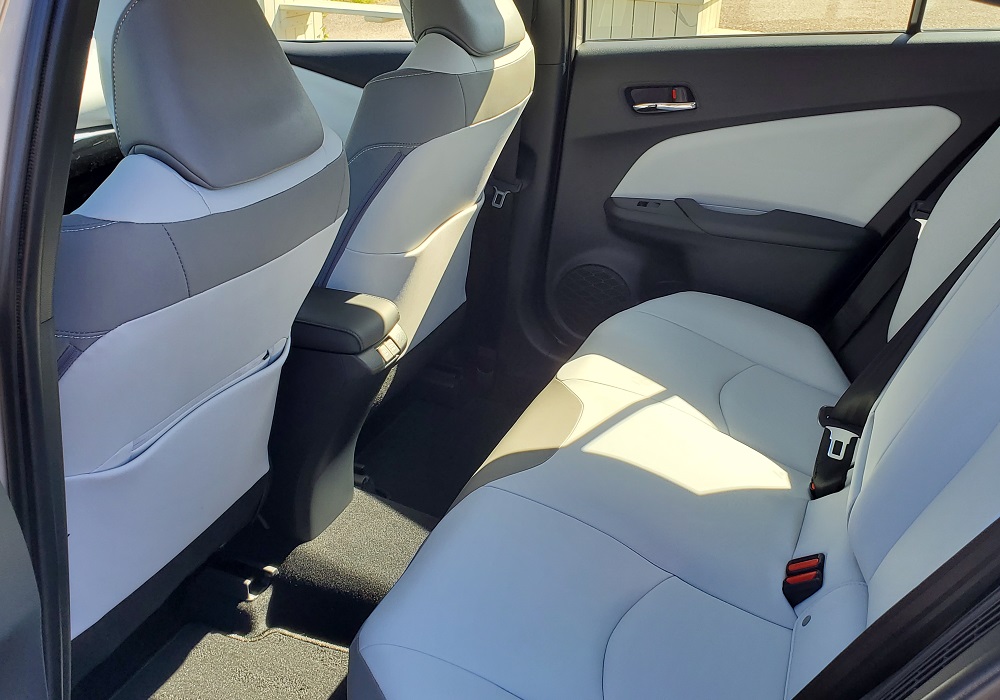 While the front seats offer loads of legroom at 43.2 inches, the rear seats are a little tighter at 33.4. This is still plenty for the average adolescent, but taller teens may struggle with it. Of course, my parents stuffed my teenage behind in the back seat of an Eagle Talon and Geo Metro, so cry me a river! As my Dad would say, “you’re young and flexible… deal with it.”

Interior noise is surprisingly low, considering Toyota needed to keep weight as low as possible to enhance fuel economy. This is especially true in terms of road noise in EV mode.

If cargo hauling is in your future, though, you may want to think twice about the 2020 Prius Prime. With its larger battery and associated bits, the Prime loses nearly 8 cubic feet compared to the base Prius, putting it at a tight-for-a-liftback 19.8 cubes. 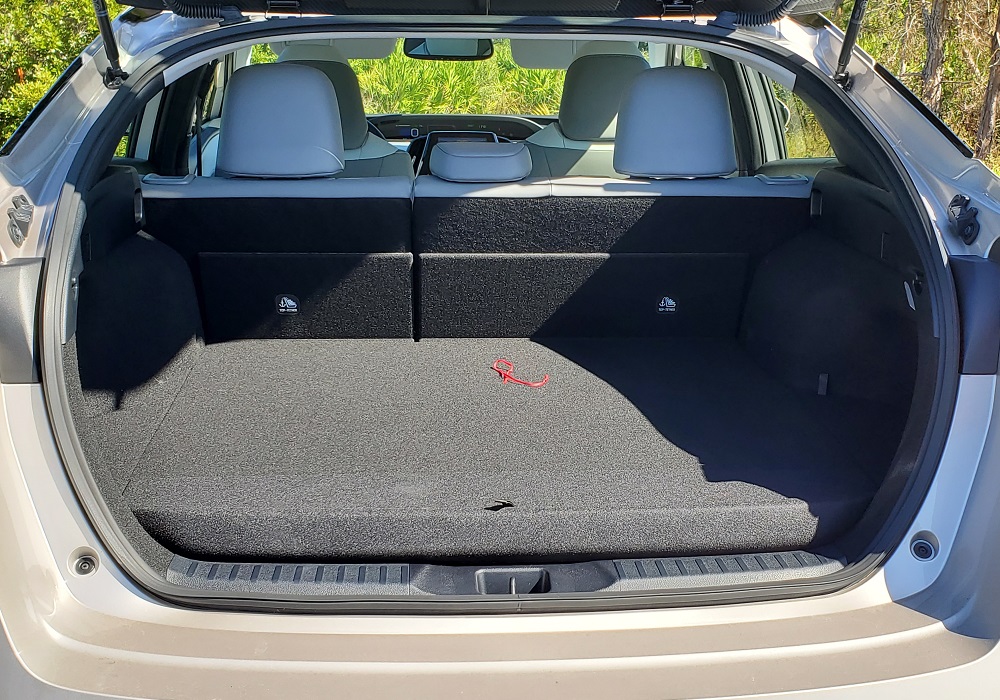 Sure, you can fold down the rear seats for a little more cargo space, but Toyota does not offer an official max capacity. Also, the seats fold to a level well below the cargo floor, resulting in about a 3-inch drop from the cargo floor to the seatbacks. There is a ramp that folds down to allow a smoother transition, but this will still leave the backside of longer cargo angled upward. Plus, the rearmost portion of the cargo floor is only 11 inches from the liftgate and 10.5 inches from the cargo cover, so there is not much room to account for the upward angle. 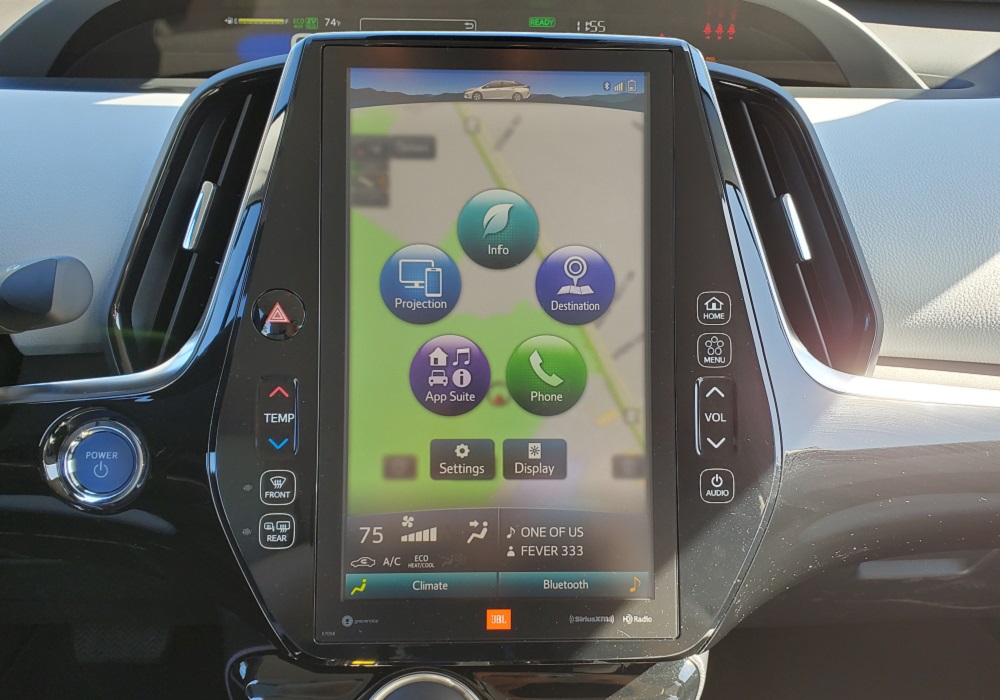 Like virtually every other Toyota model, the Prius comes standard with all the latest safety goodies, including automatic emergency braking with pedestrian detection, lane-departure alert with steering assist, automatic high-beam headlights, and full-speed adaptive cruise. While these safety features are great to have, I have had some issues with the Prius’ automatic high-beam headlights flashing at oncoming traffic (could be a setting) and the adaptive cruise being way too aggressive with cars changing lanes in front of you.

My Limited tester came loaded to the gills. In addition to the LE and XLE goodies, it includes integrated LED fog lights, rain-sensing wipers, a heated steering wheel, an auto-dimming rearview mirror with universal home remote, and the JBL 11-speaker audio system. 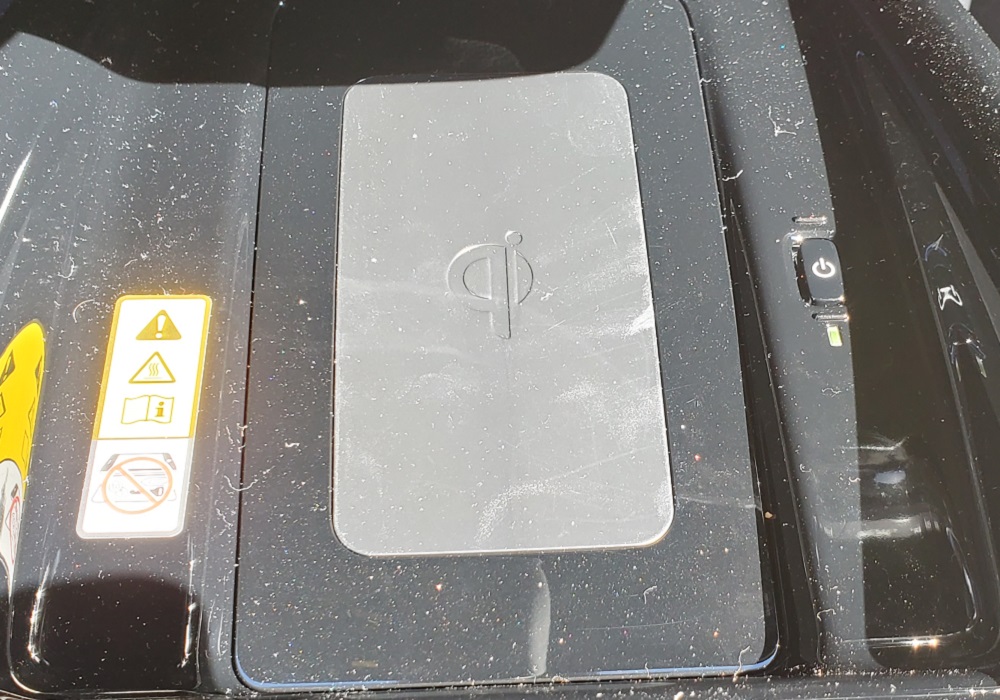 The good side of these features include the incredible-sounding JBL audio system at up to 60 percent max volume (washes out above that), the massive touchscreen looks great, the wireless charging pad seems to work as intended and actually holds the phone in place 80 percent of the time, and the remote A/C is a great idea (if I can get it to work).

On the bad side, that big, beautiful touchscreen washes out easily in the daytime; the infotainment system is way too complex and distracting; the touch-sensitive buttons look great, but knobs are better; Toyota still struggles with installing Google’s Android Auto, though is slowly changing; and I have yet to find an EV range estimator. 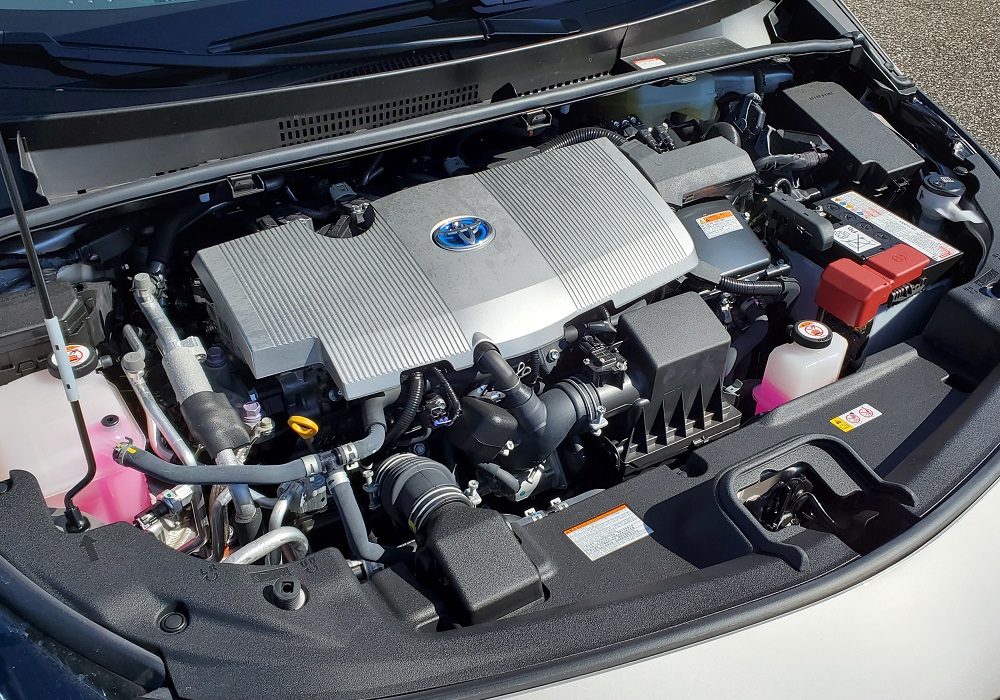 Want performance? The Prius Prime shouldn’t be anywhere on your shopping list. Between its 1.8-liter four-cylinder engine and electric motor, it musters up 121 horsepower. This results in a 10-second 0-to-60 time, but thanks to the electric motor’s instant torque, there is a nice initial jolt when you stuff the pedal to the floor. If you really want to look like a tool, you go full throttle with the wheels turned and get a little chirp from the tires – and judgmental glares from anyone nearby.

Acceleration is very smooth, though. The Prius Prime can thank its lack of a transmission for this.

Overall, though, we must remember what the Prius is built for: smooth, fuel-efficient driving. And it does that as well as any other plug-in hybrid. 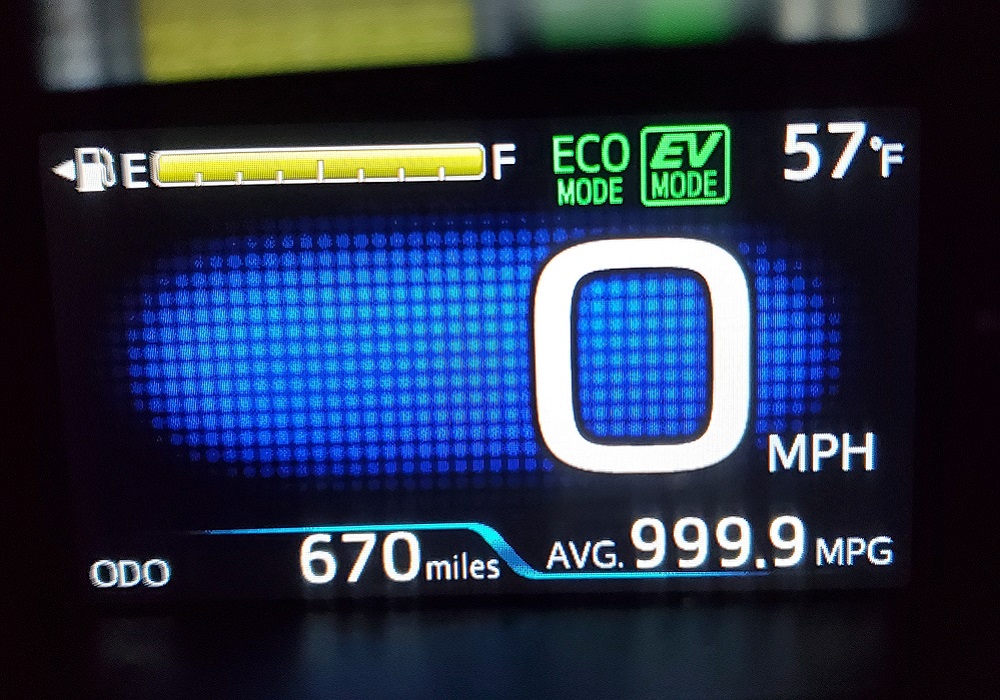 Fuel economy is what makes the Prius Prime a winner in my book. Sure, it delivers up to 54 mpg combined in hybrid mode, but I care most about that EV range.

I work 100 percent remote, so I have no commute. After a week of tinkering around town for groceries, going to the gym, and taking the kiddo to the park or school, I have not touched hybrid mode in the 100 or so miles I’ve driven. Of course, I charge it almost every second we are home, though I have forgotten a few times and remain gasoline-free. This buries its fuel-economy meter at 999.9 mpg. Of course, that is not accurate, considering the cost to charge, but it’s amusing nonetheless.

This makes it the perfect car for a stay-at-home parent or a remote worker.

Today, I will venture into Tampa, which is about a 40-minute drive, so I will likely take a few sips from the gas tank. I will update the review when I get this sorted out.

Another thing to consider is how much keeping the Prius charged up will cost. The EPA claims it is the equivalent of 133 mpg, but I care most about the extra cost per month. I am sure we are talking an increase of under $1 on charging days, but I will update this review once I get my electric bill for November. 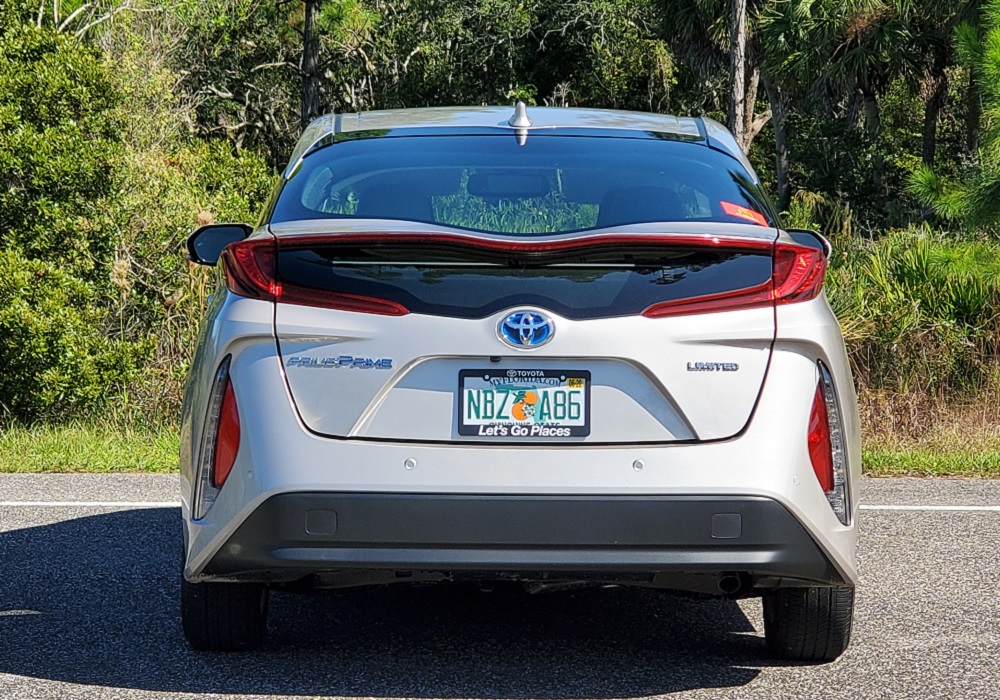 The Toyota Prius Prime is great as a short-range EV and has the extra range of a traditional gasoline engine backing it up. This results in an incredible 640-mile driving range. The EPA claims the average driver will save $4,250 over five years in the Prime, so it is the equivalent of buying a $23,500 to $29,400 vehicle before any tax credits.

Considering its features and size, that is not too shabby, though the Hyundai Ioniq Plug-In Hybrid offers more value at $21,350 to $25,350 after fuel savings and before credits. Plus, it has an extra 4 miles of EV range, a more traditional look inside and out, 4.3 cubes of extra cargo space, and more interior tech.

I would suggest checking out the Ioniq immediately following the Prius before making any decisions. You may find this little-known Hyundai suits your needs. No matter how you slice it, though, the 2020 Toyota Prius Prime is still a great option for plug-in shoppers.