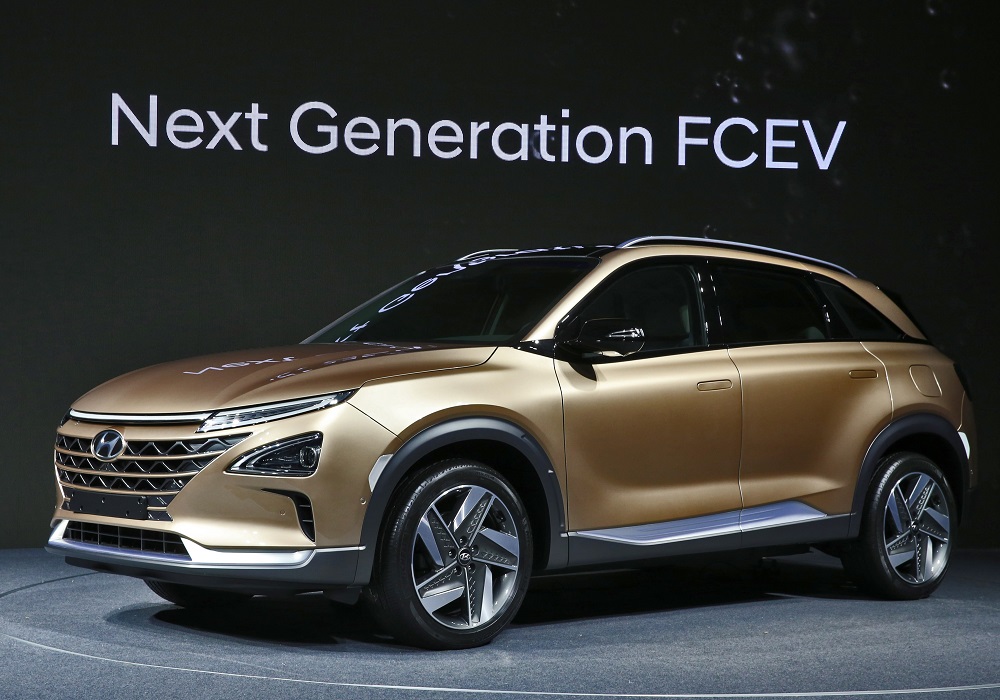 Hydrogen fuel cell vehicles once seemed like the perfect bridge between gasoline power and battery power, but it has lost a little steam as of late. Today, Hyundai shows it hasn’t abandoned the FCV plan with its reveal of a new fuel cell system and a concept FCV.

With the popularity of crossovers, it’s no shock that the new Hyundai FCV concept is one. What is shocking, though, is its appearance. Hyundai took a step away from its typical timid styling with this one and revealed a concept that makes it clear it has advanced technology under the hood.

Up front, its nose is quite busy with its slim headlights connected by a thin upper grille, a tapering lower grille that abandons Hyundai’s corporate appearance, and slick air inlets. The rest of the body is mostly void of any hard angles, which is an obvious attempt to make it as slippery as possible. The only areas where there is any real character are the rocker panels, which have a few angles on them. As for the fuel cell itself, this is Hyundai’s fourth-generation system, and it builds on what the automaker has learned throughout the years. This new system has a 60 percent efficiency, which is a 9 percent increase over the Tucson Fuel Cell’s system. Hyundai hopes this system will deliver a 360-mile range on a tank of hydrogen.

In terms of output, Hyundai aims for a 20 percent increase over the Tucson Fuel Cell, putting it at 160 horsepower. Hyundai also expects vast improvements in its ability to tolerate cold weather. According to the presser, the new fuel cell vehicle will be capable of starting at temperatures well below freezing — 22 degrees Fahrenheit to be exact.

Finally, one of the biggest issues with fuel cell vehicles: hydrogen storage. Hyundai has made advancements in this area by creating two equal-sized tanks, as opposed to different-sized tanks many FCVs have had, and creating world-class tank gravimetric capacity by way of innovations in the plastic liner to reduce its thickness. Hyundai didn’t unveil the official release schedule for a production version of this FCV, but it did outline its vision for a greener future. These plans include an EV version of its Kona SUV with a 242-mile range in late-2018, an EV Genesis model in 2021, and a long-range EV with a 310-mile range after 2021.