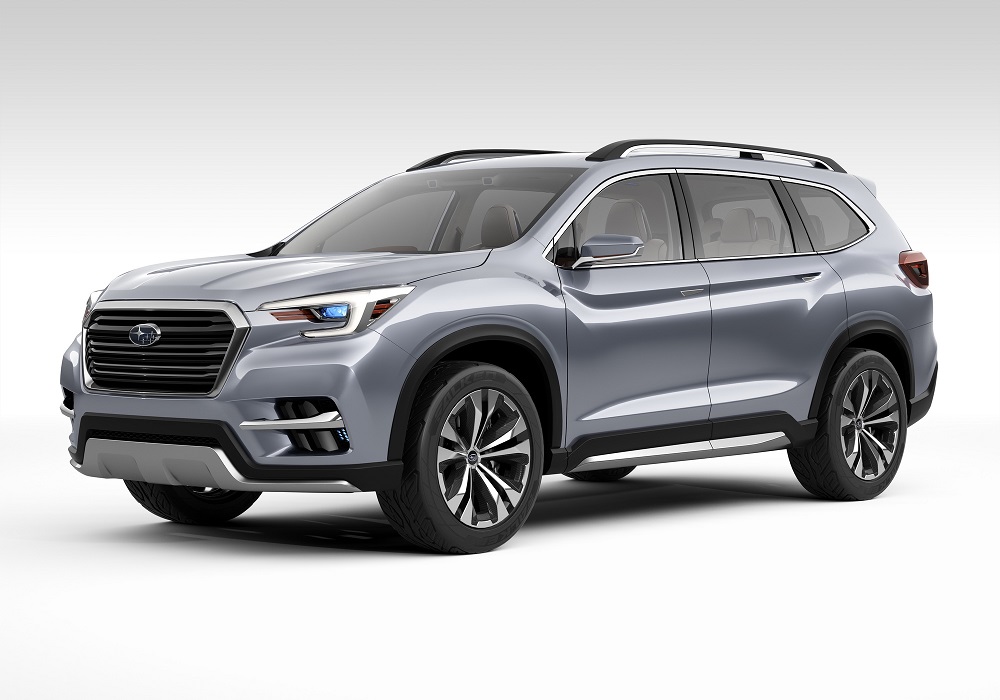 For being the king of the crossover, Subaru’s lineup is surprisingly void of a seven-passenger model. Subaru recently announce this will come to an end shortly, and we got our first look the concept version of this crossover, which will carry the Ascent name, in New York.

This concept shows off a very familiar design language, as it carries on the brand’s “Dynamic x Solid” theme, which includes the hexagon grille, C-shaped headlights and taillights, chiseled body lines, and more. However, this model has a far more SUV-like stance, as it is more upright and rigid than any Subaru on the market. This concept measures 198.8 inches long, 78.3 inches wide and 72.4 inches high, and it rides on a 117-inch wheelbase with 21-inch wheels wrapped in 275/50R21 rubber at the corners. This makes it 17.9 inches longer, 7.6 inches wider, and 4.2 inches taller than the largest of today’s Subaru crossovers, the Forester. Its wheelbase is also 13.1 inches longer than the Forrester’s.

Though there are no specifics on it, this concept’s interior makes it seem like the production model will be high-tech. In the images, you can see a large infotainment screen, dials with numbers in the center of them, an LCD instrument panel, a vehicle information center in the center of the dash, and a full-length glass roof. While this looks great, I highly doubt we’ll see all of this in the production model. Seating consists of two front seats, two center captain chairs, and three-seat third row. Powering the new Ascent crossover will be an all-new turbocharged boxer engine with direct injection. Subaru doesn’t mention how many cylinders this new engine will have, but my gut says it’ll be a four-pot with more than 250 ponies. There is an outside chance that Subaru could create a badass turbocharged six-cylinder to bestow upon its new range-topping crossover, but I highly doubt it.

Stay tuned for updates as we approach the 2018 debut of the all-new Subaru Ascent crossover.