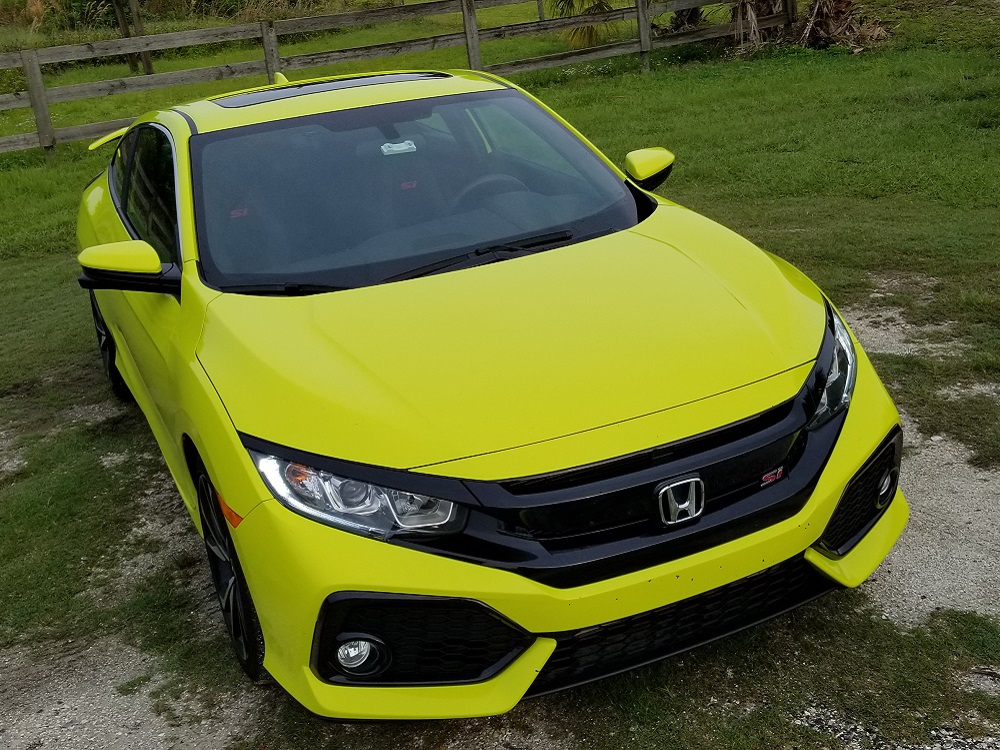 The 10th-generation Honda Civic debuted with a striking new look in 2016, and the Si model joined in with a new turbocharged engine in 2017. Since the new-generation Si’s debut, I have been hounding Honda to give me a week behind the wheel of one, but things just never aligned. Finally, just a few weeks before I was scheduled to leave the country for good, Honda sent me the email I had been waiting for: It was set to drop off a black 2019 Civic Coupe Si.

Well, what arrived was a little brighter than I expected, but I finally got my seat time in the Civic Si. Here’s what I thought of it. 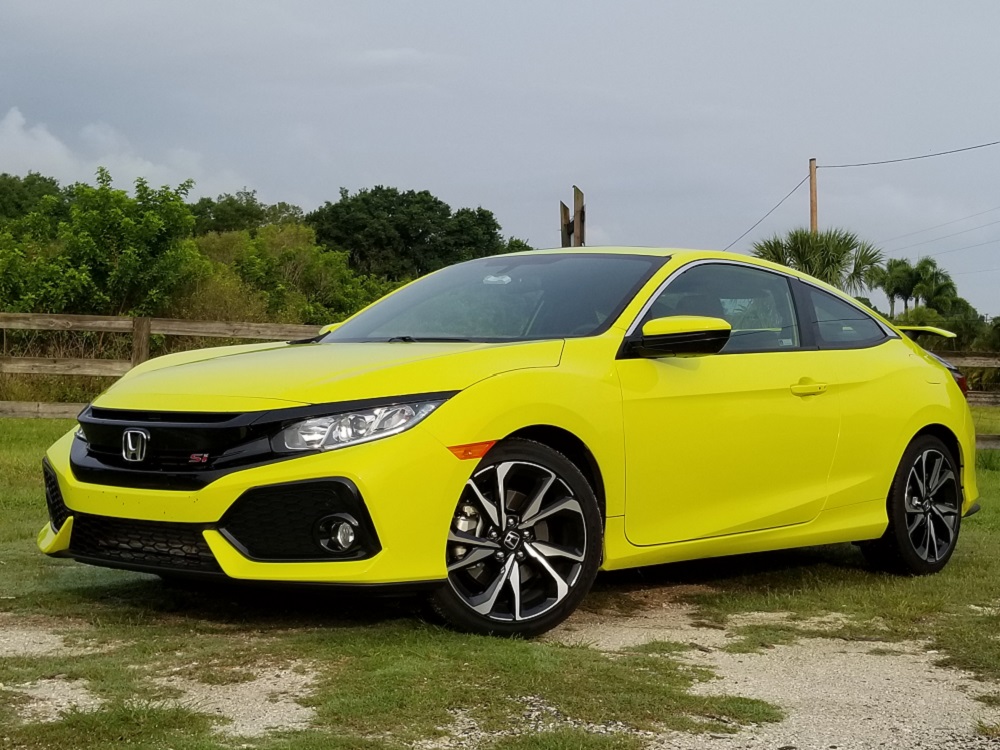 Look, when I specifically requested a Civic Si from Honda, I wasn’t expecting something that reminded me of my days highlighting every page of my college anthropology book in my driveway.

The email Honda’s fleet rep clearly said it was black, so the dang thing nearly blinded me when I opened my garage door to greet the rep who delivered it to me. But, I chuckled, made probably the 100th “rolling highlighter” joke he’s heard since this car’s been in the fleet and pulled this beast into my garage to avoid complaints to the HOA about this coupe disturbing the peace.

While I joke about it now, the color actually grew on me, and the added attention it got in parking lots took me back to my days of owning a Focus ST when they were still uncommon. The Civic Coupe’s shape fits the hue nicely too with its sharp lines, big faux air intakes, and huge rear wing. It brought out the Si’s sportiness in a way I didn’t really expect. 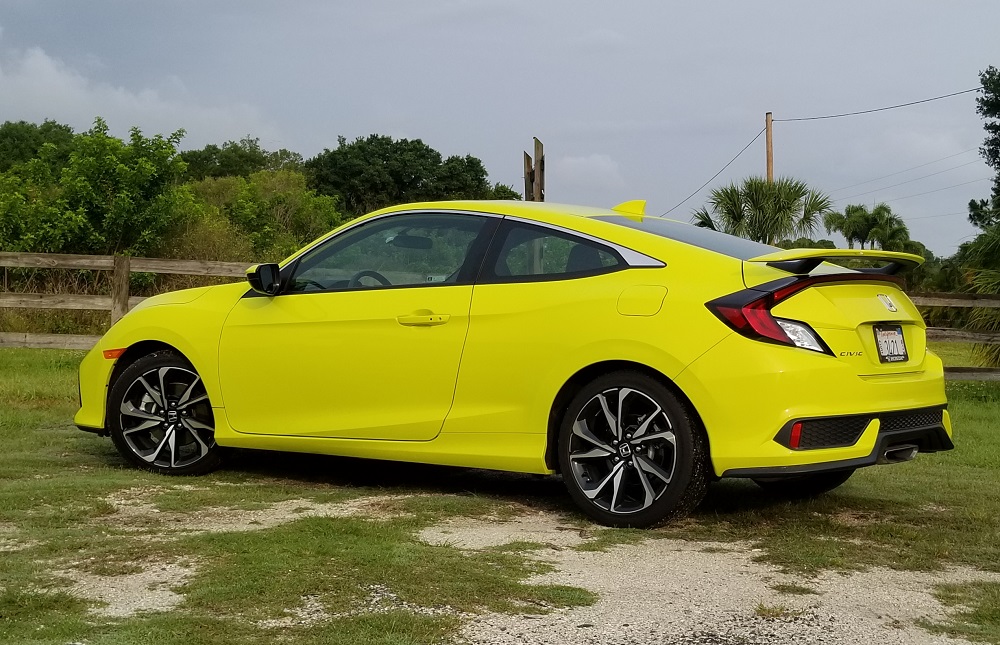 Moving away from the bright paint job, the 2019 Civic Coupe Si is a sexy beast in person thanks to its abundance of sharp lines and creases, light bar connecting the taillights, trapezoidal center-mount exhaust exit, and perfect teardrop silhouette.

Inside, things calm down a bit, but the Si still shows off a little separation from the standard Civic lineup with sport seats that feature “Si” embroidery, red contrast stitching, and red backlighting on the infotainment screen. Otherwise, the Civic Si’s cabin isn’t much different than the rest of the lineup, and this is a good thing.

Up front, the seats offer plenty of room and adjustment for most buyers, though they can get a little hard on longer drives. The bolstering is supportive when it needs to be and not too grabby when you’re cruising down the highway. The rear seats, while comfortable enough on the backside, offer just 35.9 inches of legroom and 34.5 inches of headroom, which makes things a little tight for anyone over 6 feet tall. And with an 11.9-cubic-foot trunk, this is no grocery getter.

The ride quality in the Civic Si is as good as one could expect from a sport-tuned coupe, though it can get a little uncomfortable on rough roads. Road noise, however, is intrusive at nearly every speed. 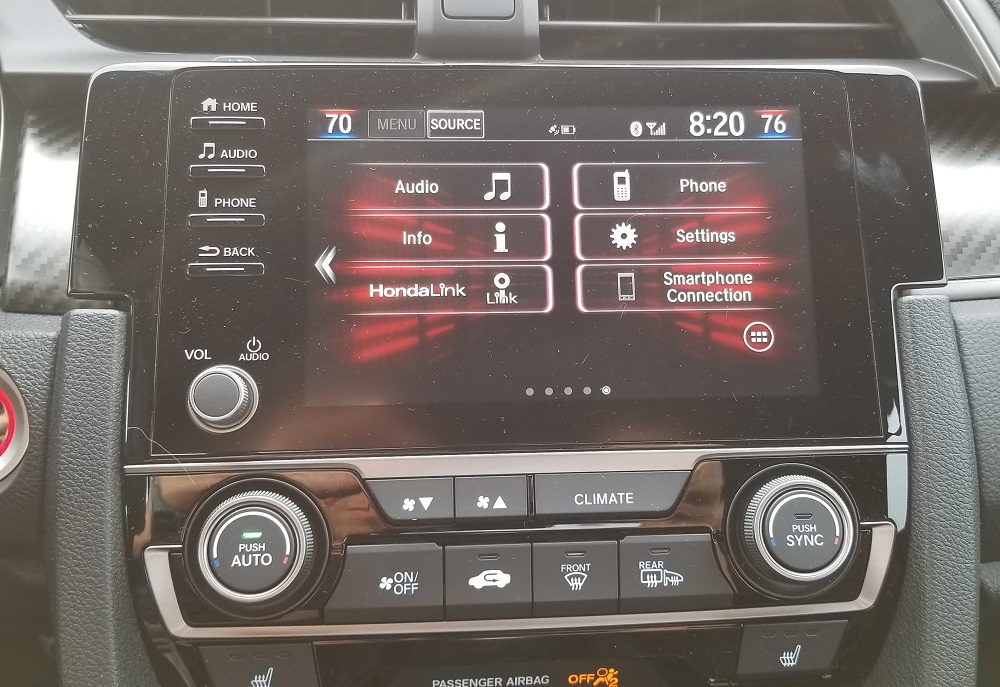 The audio system was likely the biggest letdown, as I expected much more from it. It wasn’t terrible, but it would wash out at higher volumes.

While the rest of the Civic lineup has tons of available safety equipment, the Civic Si gets just the crumbs, as its standard safety equipment includes Honda LaneWatch and a multi-angle rearview camera. A key reason for its limited safety equipment is its manual transmission, which limits the abilities of adaptive cruise and automatic emergency braking, but it doesn’t make it impossible to add them. 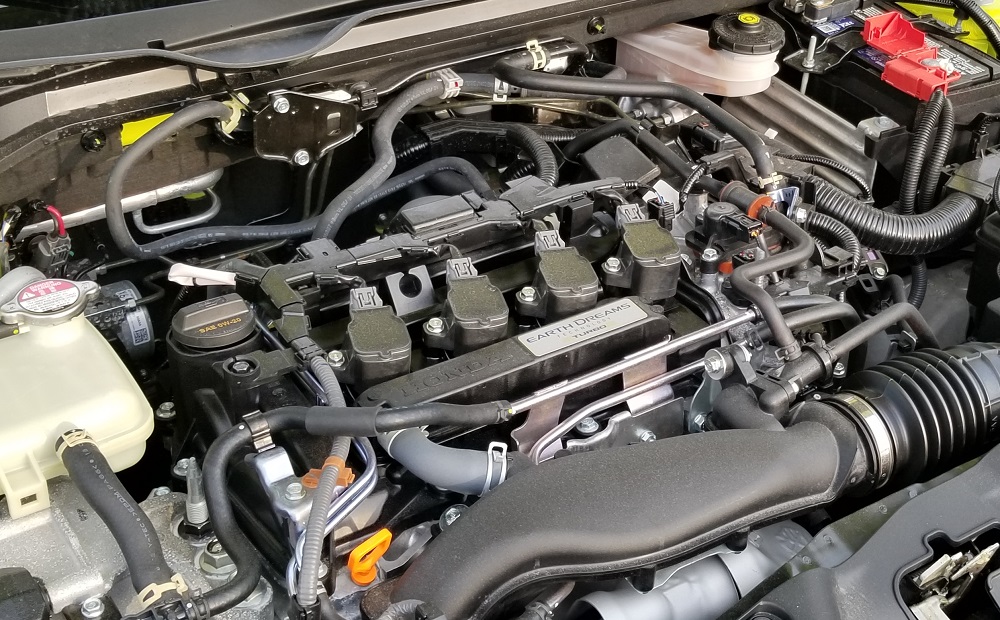 I am a little jaded when it comes to performance as my last two personal cars were a 350-horsepower Focus ST and a 325-horsepower Jetta GLI, but the Civic Si was a pleasant surprise. Its 1.5-liter turbo four-pot delivers 205 horsepower and 192 pound-feet of torque, which isn’t much, but with that 192 pound-feet coming in at 2,100 rpm, this powerband is far more manageable than the previous generation Si’s.

This easy-access power delivers a 60 mph sprint time in the low-six-second range, so it is plenty quick for nearly any buyer. If there is one complaint, it’s that the clutch is very light and offers almost no feedback, so it takes some getting used to (and a few embarrassing grinds) before you can get down to that low-six sprint time.

Handling is impressive with its adaptive suspension and tidy 2,889-pound curb weight. It would be nice to see its 61/39 weight distribution cleaned up a bit, as it nosedives a bit heading into the corners and shows a little understeer, but this is what you get in a front-driven sports coupe. You just have to learn to drive it, and the learning curve is not overly steep.

Probably the best part about the Civic Si is the ability to use it as a daily driver. Sure, it winds tight when pedal meets floor mat, but at a quarter or half throttle, it is as polite as any commuter car. It’s a very fine combination. 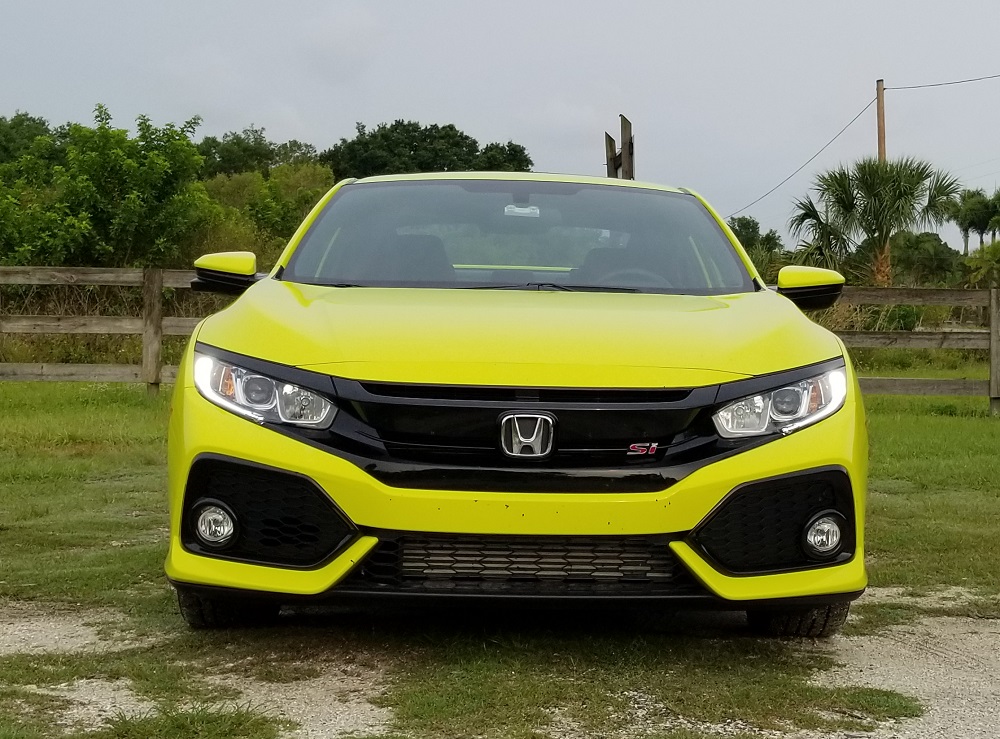 Speaking of dual personalities, the 2019 Honda Civic Coupe Si shows its commuter-friendly ways in the fuel economy department too. If you can keep the pedal off the floor, the Si will reward you with 28 mpg city, 38 highway, and 32 combined. In my testing, I even tickled 40 mpg when I took it really easy. Since the Si requires premium gas, you’ll want to take full advantage of this great efficiency. 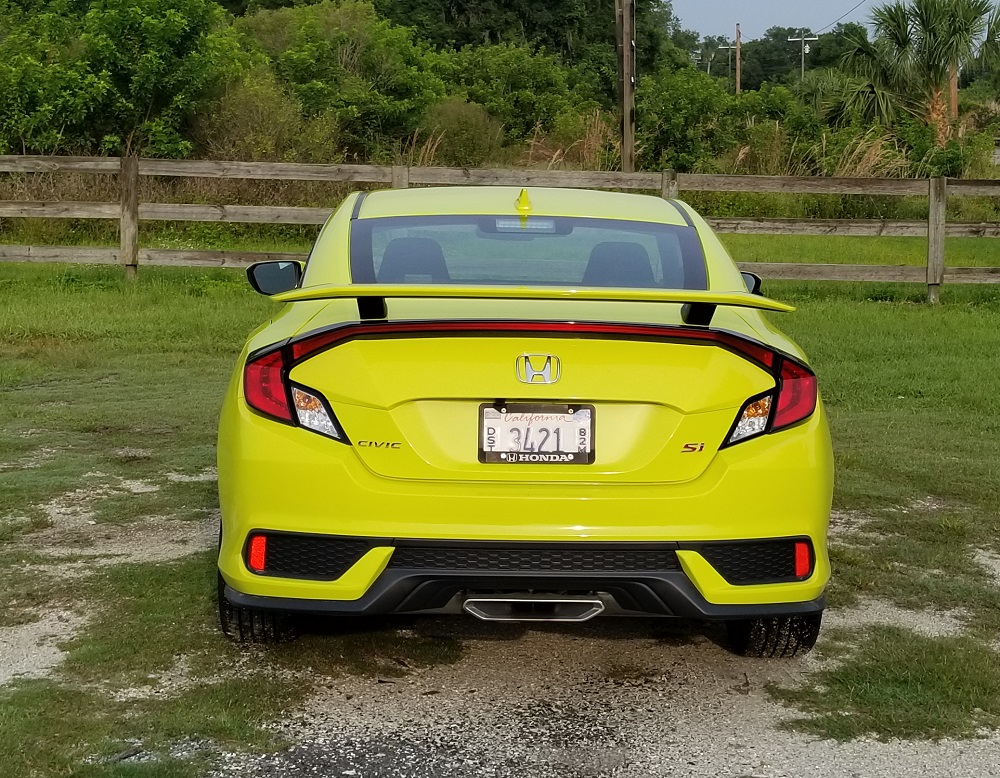 The Civic Coupe Si doesn’t quite hit the mark in performance for me, nor do its coupe roofline and two doors do me any favors in getting my son’s car seat in place. That said, it is a great commuter car with the added pep I crave without killing the gas budget. If I were in the market for a main commuter car so I could park my tuned ride, the Civic Si would be one option on the table, but I would go with the sedan model to help put a damper on my F-bombs while installing a car seat.