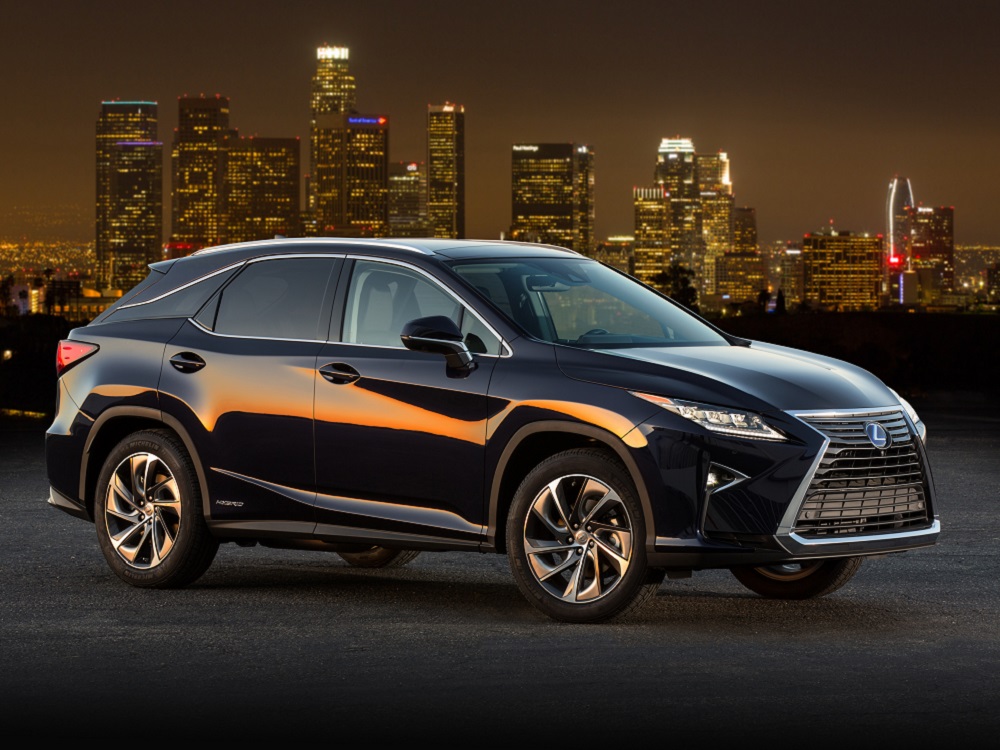 Crossovers are a dominant force in the luxury space as buyers now seek vehicles that drive like sedans, can haul people and cargo with ease, and can handle light off-road driving. This is what pushed Lexus to release the RX crossover in 1999. And a new-found desire for sedan-like thriftiness resulted in the hybrid RX 400h’s 2006 debut. Fast-forward to 2019, and we have the aggressively styled Lexus RX 450h with big power, a bold look, and big miles per gallon.

Can the 2019 Lexus RX 450h check all the boxes luxury crossover shoppers need it to? I spent a week in one to find out. 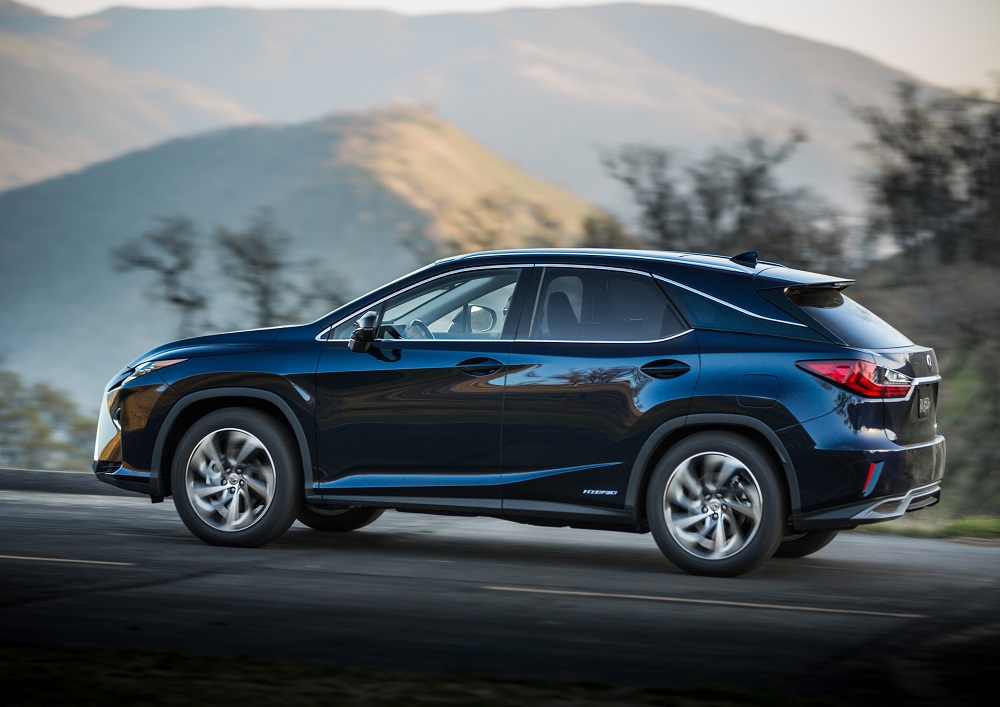 In 2016, Lexus brought in the fourth-generation RX lineup, and this new look carried over into the hybrid RX 450h. This redesign was really the jumping-off point for the entire Lexus lineup, as every model after this redesign took on this new, more angular look.

Up front is where the drama begins on this aggressively styled crossover with its massive spindle grille with gloss-black insert flanked by sharp triple-beam LED headlights, which are a $1,615 option over the standard bi-LED lights. That’s a big chunk of cash for non-adaptive headlights the IIHS says are actually worse than the standard bi-LEDs with the $515 adaptive lighting option. The spindle grille, you’ll notice, is the kickoff point for the entire RX 450h design, as the ridges in the hood connect to it and lead your eyes all the way to the A-pillars. 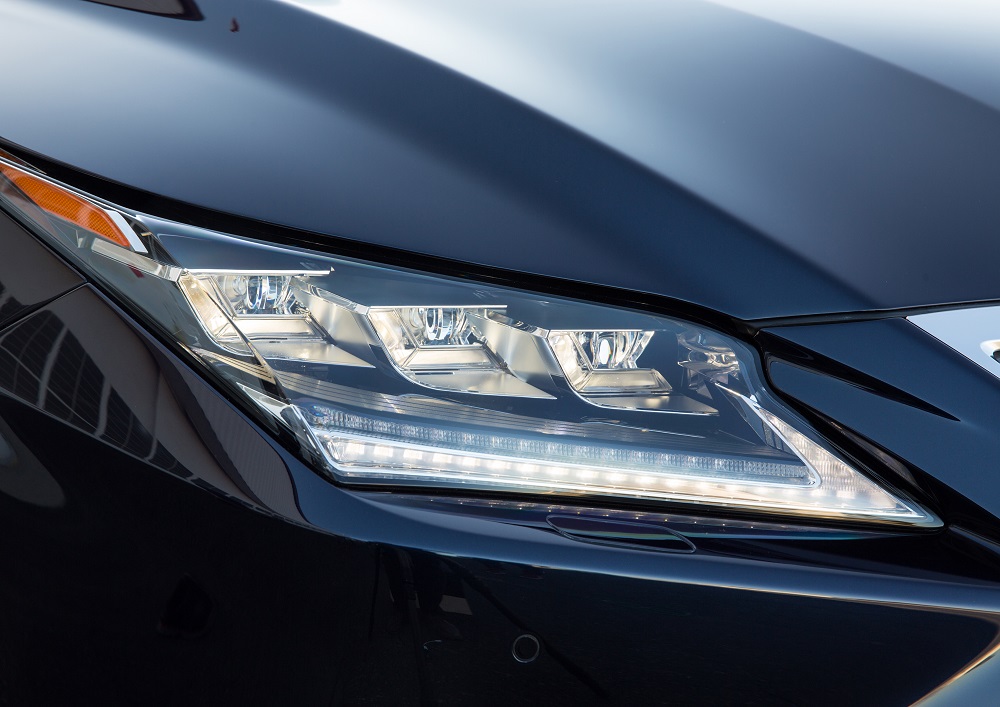 In profile, the RX 450h’s eye-grabbing looks don’t quit with its sharp scallops on the bottoms of the doors, the hard lines on the wheel flares, and the black C-pillar accent that creates the floating-roof look.

Around back, Lexus ties everything together with bright LED taillights that feature angles that create almost the same outline as the spindle grille up front. It’s a subtle tie-in, but great attention to detail by Lexus’ design team.

Inside, Lexus spared no expense making the RX 450h look and feel like a premium rig. There is leather slathered on all the touch points and where there isn’t leather, there is a good chance you’re touching high-gloss plastics, wood, or metal. The dash is flat and wide, providing great forward visibility, and the optional 12.3-inch infotainment screen is wide and low so it doesn’t block your outward visibility.

It’s a Lexus, so comfort is key. The front seating position is great, and there are 10 ways I can adjust the front seats to find that perfect angle. The standard seats are NuLuxe leatherette, but my tester came with the $4,235 Luxury Package that swaps those out for semi-aniline leather. And for an extra $640, they have butt warmers and coolers on them, making this beast super-comfy, even on longer hauls.

Rear passengers are treated to 38 inches of legroom, which is plenty for the average adult. Plus, the second row reclines for added comfort. One downside to getting the hybrid model is the batteries are right under the rear seat, so Lexus had to raise the rear thrones by about an inch, gobbling up precious headroom. This leaves you with just 38.2 inches of headroom in the rear. 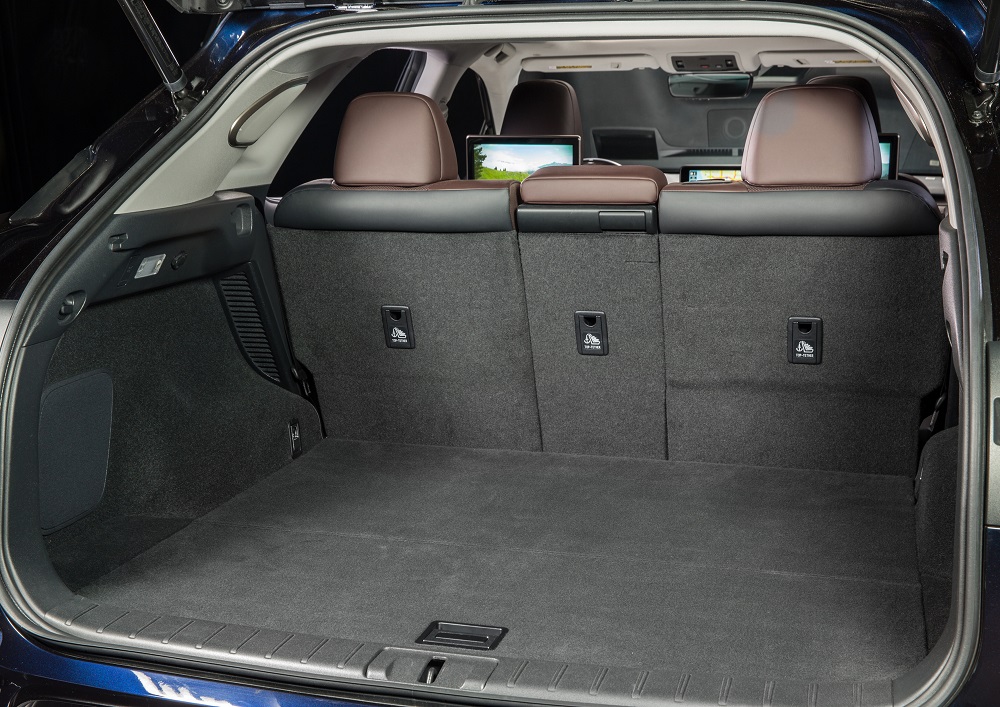 Road noise is not overly intrusive, but the massive 20-inch Super Chrome wheels — also a part of the Luxury Package — allow a little more noise and vibration in than the standard 18-inch rollers. But they look freaking awesome, so I’ll give Lexus a pass on that. However, the hybrid model’s continuously variable transmission lets the V-6 engine’s revs get a little high, and the noise bleeds into the cabin on mid to hard acceleration. 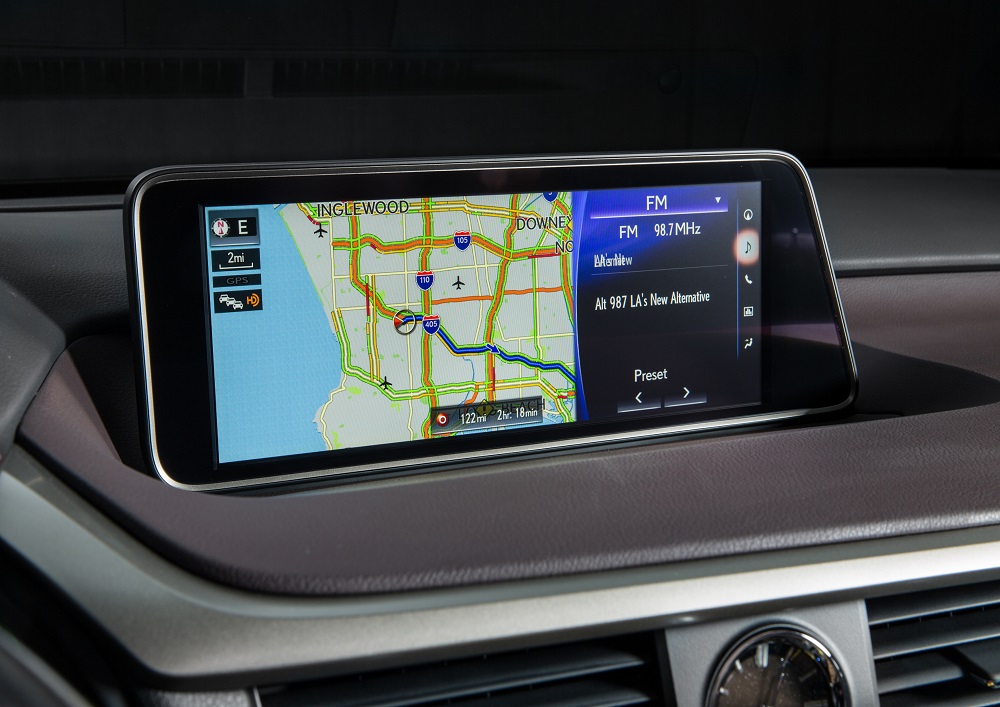 The optional color head-up display offers all the info you need right in your field of vision. The 15-speaker Mark Levinson audio system is nothing short of incredible, and the RX450h’s size is just right for this audio system. And the 12.3-inch infotainment screen is clean, crisp, and in the perfect position.

There were a few technical shortcomings, though, and anyone who’s researched any new Lexus vehicle knows right where I am going.

First, the navigation system is clunky at best and the voice recognition is basically useless for finding an address. Compounding my frustration was the idiotic joystick controller that basically does whatever the hell it wants. 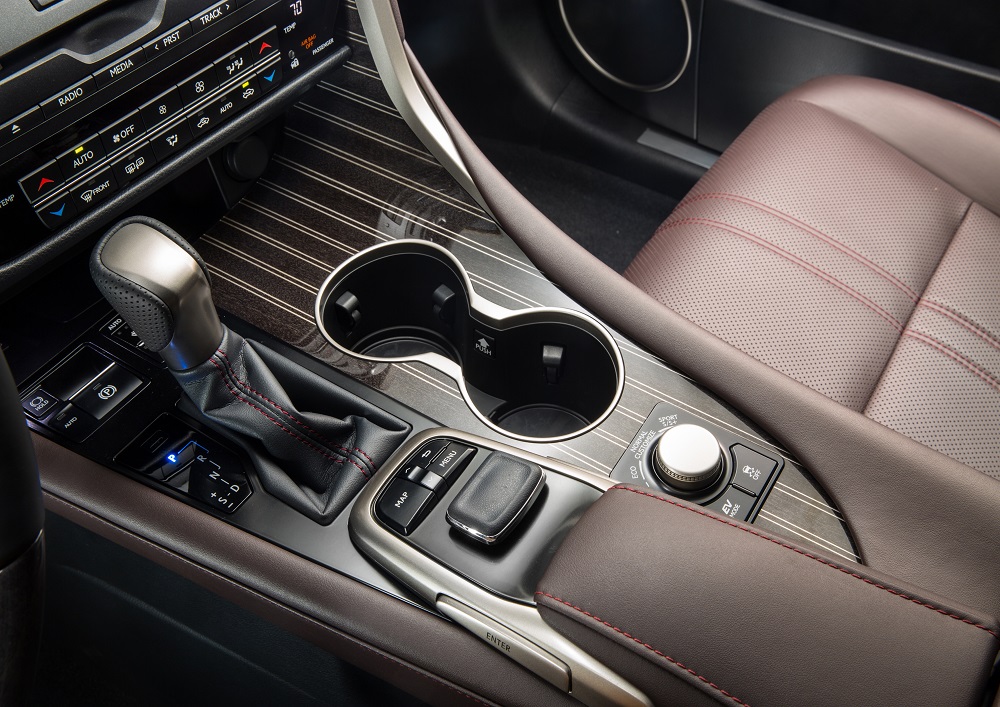 If the joystick interface jumping around like an over-caffeinated rabbit wasn’t bad enough, the infotainment system pushed me to within moments of ripping it out by hanging up and taking a few seconds to “think” as I entered an address or POI. Continuing to offer this system that everyone complains about is unacceptable laziness on Lexus’ part. Sadly, the only update Lexus has made to this system is replacing the joystick with an equally frustrating touchpad in some models. 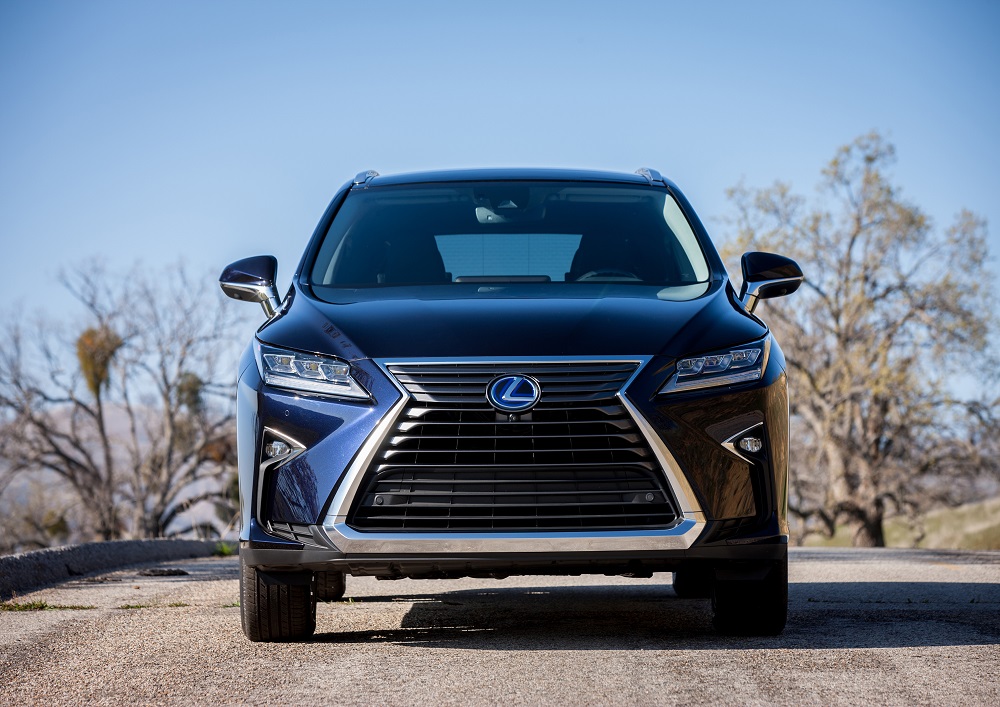 The 2019 Lexus RX 450h combines a 3.5-liter V-6 engine with two electric drive motors (one front and one rear) and one generator and transmission-ratio-control motor. These propulsion units do their technical ballet to result in a total system output of 308 horsepower and 247 pound-feet of torque. This is enough juice to get the RX 450h to 60 mph in 7.9 seconds and up to an electronically limited 112 mph top speed.

While the RX 450h is plenty quick for a hybrid, there is just something off about it. When I am behind the wheel of the Acura MDX Sport Hybrid, for example, I feel like I am driving something special, but the RX 450h feels like… well… a Toyota. Not that driving a Toyota is a bad thing, but I don’t want my $60,000 luxury crossover to feel like one. I am not sure if it’s the whiney CVT, lack of any sporty feel, or maybe that the Toyota K platform the RX sits on underpins every front-wheel-drive Toyota north of the Corolla, but I simply don’t feel like I am driving a Lexus.

While it may not feel all that special, the 2019 Lexus RX 450h delivers solid fuel economy numbers at 31 mpg city, 28 highway, and 30 combined. This crushes the more special-feeling MDX Sport Hybrid by 5 mpg city, 1 mpg highway, and 3 mpg combined.

The 2019 Lexus RX 450h is exactly what it’s supposed to be: a cushy luxury crossover that won’t kill you in fuel costs. It delivers an upscale cabin, sharp looks, and up to 30 mpg combined. Sure, it lacks the special feel behind the wheel that most luxury cars have, but it delivers in the areas where a hybrid luxury crossover should, and that’s really all that should matter to most buyers. 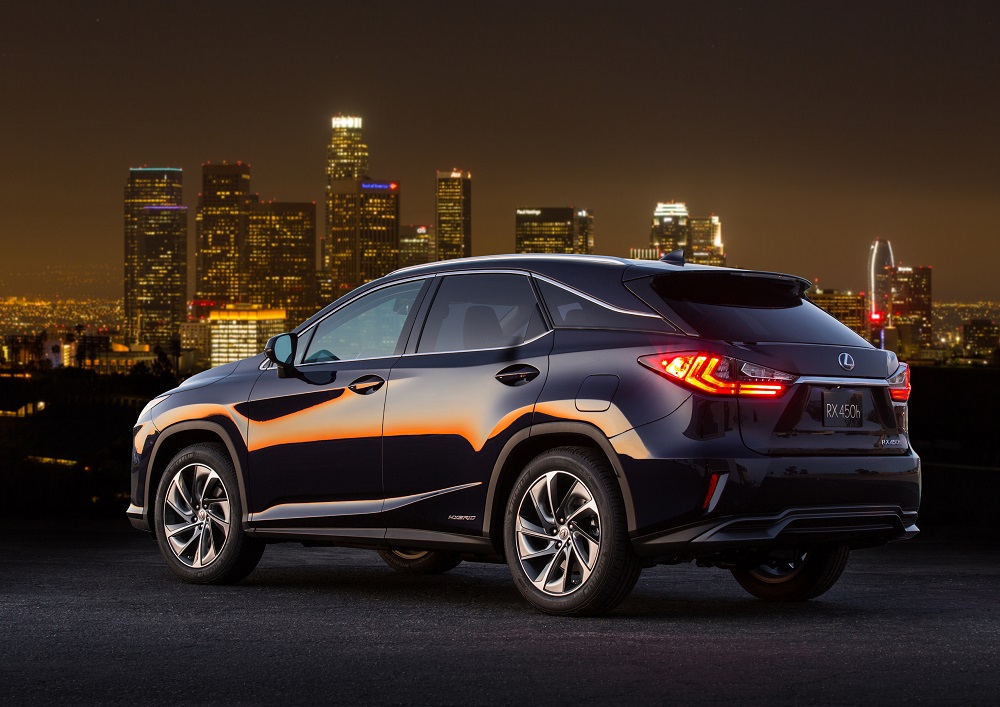 That price isn’t bad, but I can get into a similarly equipped MDX Sport Hybrid from $52,800 and a decked-out MDX Sport Hybrid for $59,550. Add to that the extra zip the MDX Sport Hybrid offers and its more palatable appearance, and I think I may skip the Lexus dealer and head to Acura. Now, if fuel economy is your main concern, you’ll do just fine in the RX 450h.