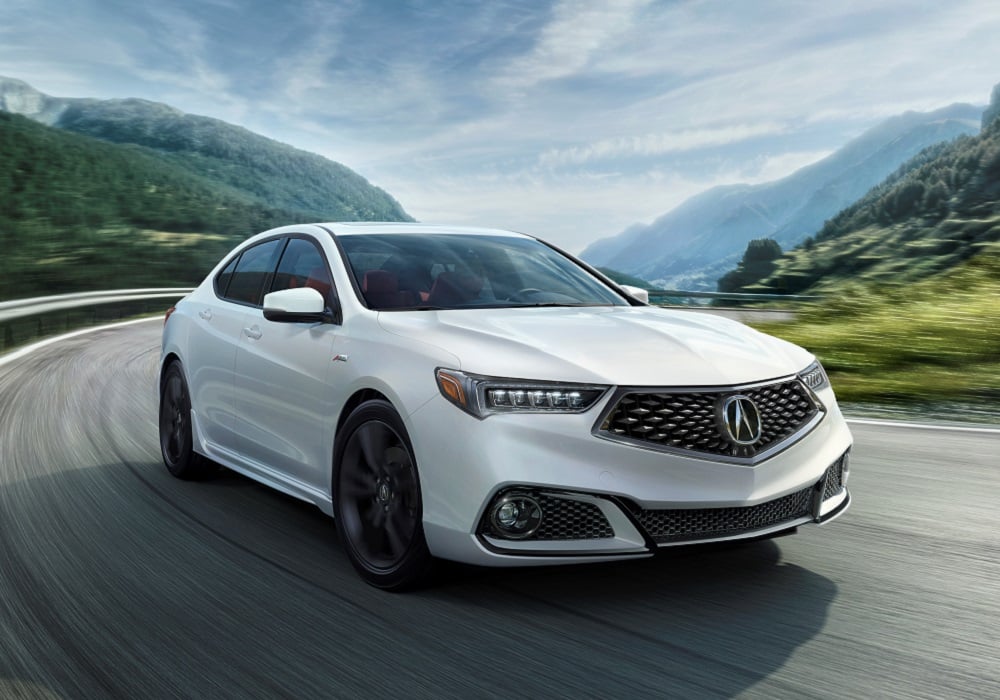 I’ve long had a love-hate relationship with Acura. I love that its vehicles deliver incredible luxury at a value its German competitors cannot match. But I hate that it rarely takes its sedans to new heights in terms of performance. The closest it ever gets is its A-Spec line. Recently, I got a chance to try out the TLX A-Spec and, as expected, I was left torn.

First, the new TLX appearance is sharp and a much-needed departure from Acura’s bland styling of previous years and that hideous Acura beak-like grille. Add in the A-Spec touches — which include the matte-black grille with a black-chrome surround, the unique front and rear fascias, side sills and rear spoiler, the special rear diffuser, 4-inch exhaust exits, and Shark Gray 19-inch wheels — and you have one stunning sedan. Inside, the TLX is a wonderful place to spend some time, but the A-Spec pushes this even further. It gains Alcantara seat and door inserts, leather seat bolsters, special stitching, a thicker-rimmed steering wheel with “A-Spec” logo, exclusive console pattern, and more. The cabin is also super-quiet when you want it to be, but lay into the accelerator pedal, and just enough engine noise comes in to let you know you’re driving a sport-tuned sedan.

Speaking of sport-tuned, the TLX A-Spec has the same 3.5-liter V-6 engine as the rest of the TLX lineup, meaning it cranks out 290 horsepower. While this is no match for BMW’s M lineup of any AMG models, it is good for a 6.5-second jaunt to 60 mph. That’s not bad, but with the added suspension tuning the A-Spec package includes, I’d love to see a little more power. Its nine-speed automatic transmission was a definite highlight, delivering smooth shifts under light throttle and banging through the gears under a heavy foot. For an extra $2,000, you can add Super Handling All-Wheel Drive, which not only gives you added traction at launch, but also helps slingshot the TLX around corners on dry pavement.

While its long list of technical features — including Jewel Eye headlights, Acura ELS 10-speaker audio system, on-demand multi-use touchscreen, and more — make it sound great, much of it works only half as well as one would expect. The multi-screen infotainment system, while better than previous iterations, is still very dated and not overly intuitive, and its creatively named headlights do nothing to improve visibility at nighttime — in fact, they almost hinder it. I will say the AcuraWatch, which combines adaptive cruise and lane-keep assist, practically lets the car drive itself. The latter feature is likely one of the best in the industry that is not technically an autonomous system. All in all, the 2018 TLX A-Spec is a great buy at $42,800 — mine ran an extra $2,000 because it was all-wheel drive, which I highly recommend — but don’t expect that fancy badge to enhance performance too much. What you can expect, though, is a nice-riding sedan with plenty of look-good bits and decent performance.

Pros:
Sharp handling
Inexpensive and very well equipped
Peaceful cabin when you want it
Feels confident and well put together