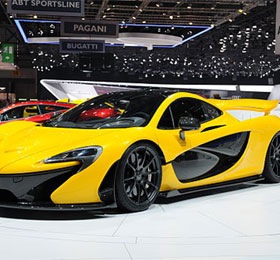 Some cars are on a completely differently level versus other vehicles on the road. These cars are made for the ultra-rich, providing them with wild toys that turn heads no matter where they go. Just regular servicing on such vehicles surpass what some people make in a year, making them incredibly expensive to own and the perfect way to show off a person’s wealth.

The following eight cars all come with a price of $1 million or more. Some feature traditional gasoline engines, while others opt for a hybrid powertrain as they pave the way for the future. All of the cars ooze flair and are loaded with so much performance ability, most drivers would be genuinely scared to really press on the accelerator.

The British automaker is famous for its legendary F1 car, but the P1 promises to go down in history for its high levels of innovation that will be felt in future vehicles for generations to come. The gasoline-electric hybrid supercar carries a $1.1 million price, making it a toy for the ultra-wealthy and an object of desire for everyone else. A 3.8-liter twin-turbo V-8 engine combines with an electric motor for a combined output of 903 horsepower and 664 pound-feet of torque. The car’s top speed is 217 mph, which is respectable. Where the P1 really shines is 0 to 60 acceleration, which takes less than 3 seconds. Braking is also otherworldly, bringing the car to a standstill in a hurry.