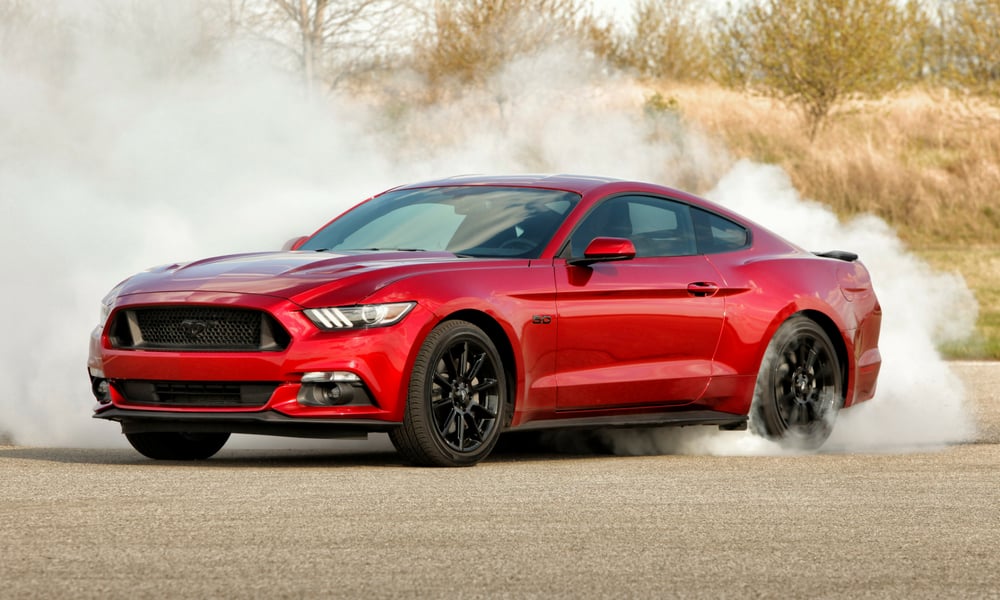 The Ford Mustang has come to represent plenty of things: rugged American individualism, cheap performance, and a time when muscle cars roamed the streets freely. There’s no denying the appeal of the pony car, but how much do you really know about it?

Most people are aware of the Mustang’s basic history, including how Lee Iacocca championed it and was credited with the design, while Carroll Shelby showed the cars could be make incredibly potent. With over 50 years of history, there are plenty of obscure facts about this iconic vehicle. How many of these did you already know?

1. Not the First Pony Car 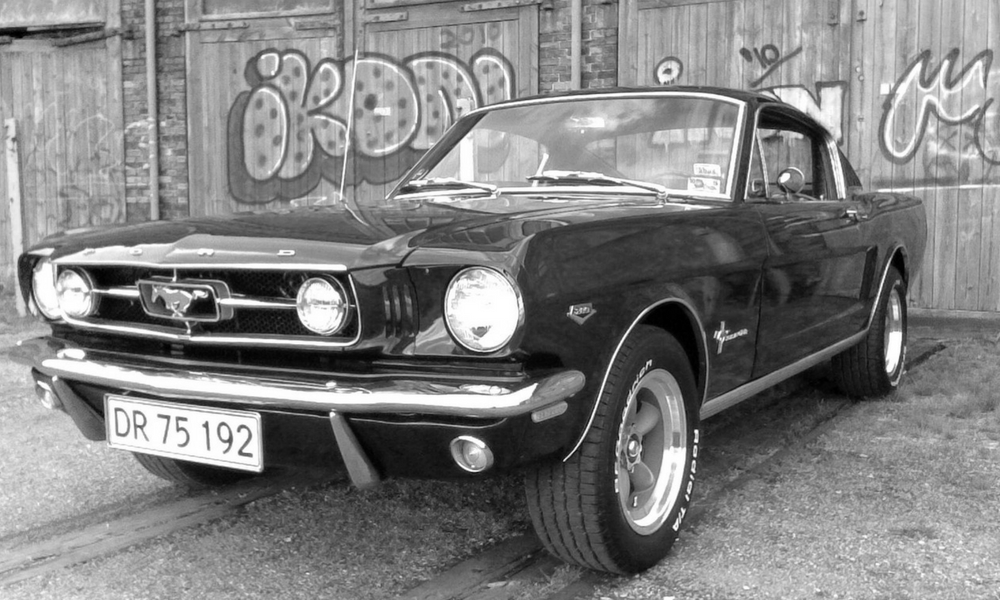 You’ve probably heard the Ford Mustang was the first pony car on the market. Pony cars have front and rear seats, rear-wheel drive, two doors, a long hood, and shortened rear decks. When they first came about, they were also quite affordable, making them appealing to younger drivers who wanted something sporty.

Call it the ultimate April Fool’s joke on Ford, but Plymouth got wind of what the Blue Oval had in store, rushing development of the Barracuda, which launched on April 1, 1964. That was two weeks before the Ford Mustang arrived at dealerships. Sure, that’s a close one, but technically the Barracuda was the first pony car to market.

Before MOPAR fans start beating their chest, it’s worth noting the Mustang is still around, while the Barracuda and the entire Plymouth brand are long gone. It doesn’t hurt that the Mustang became a huge sales hit and has never looked back at its earlier-to-market competitor. You could say Ford got the last laugh.

2. A Canadian Buyer for the First 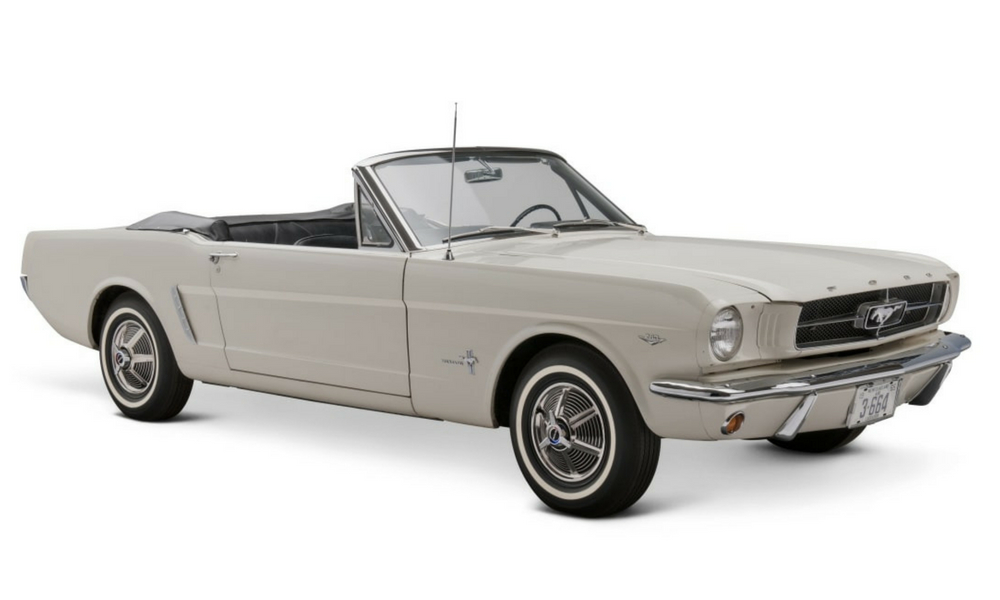 On the subject of the Ford Mustang’s launch, the very first one wasn’t sold to a red-blooded American like you would expect. Instead it went to a persuasive Canadian, even though it shouldn’t have been sold at all.

Serial number 5F08F100001 was a convertible painted in Wimbledon White that really caught the eye of Stanley Tucker, an Eastern Airlines pilot from Canada who was in St. John’s, Newfoundland, at the local Ford dealership. He was just driving by at the time and saw a commotion as people fawned over the new pony car. Once Tucker saw the Mustang he absolutely had to have it right then.

Tucker was able to talk the dealer into selling the car to him. The only problem was that first Mustang was actually a preproduction model that wasn’t supposed to be sold to anyone. Ford had plans to transport it from one Canadian Ford dealership to another, drumming up interest in the car before it was available in that market.

To get the vehicle back from Tucker, Ford had to beg for two years and promise it would deliver the one millionth Mustang to the Canadian fan in exchange for the first one. That one millionth was built in 1966 and was also a white convertible. Today, serial number 5F08F100001 is prominently displayed in the Henry Ford Museum. It still has Tucker’s license plate on it, too. 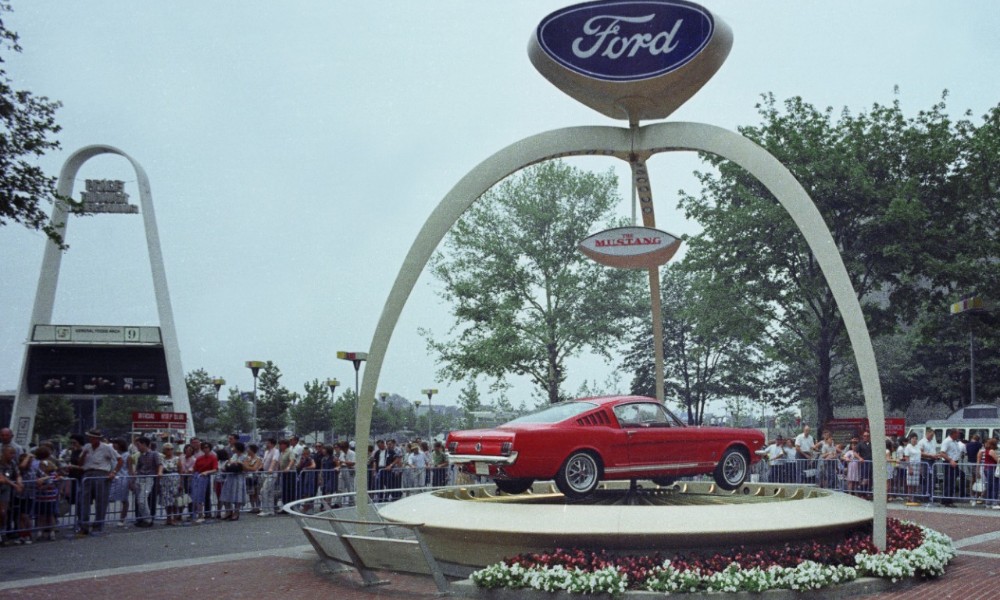 To say people were excited about the Ford Mustang would be an understatement, as 22,000 units were sold on the first day. When the pony car made its debut on April 17, 1964, the base price was just $2,368. Ford’s original sales forecast for the Mustang in the first year was about 100,000. Lucky for them, Ford sold 400,000 within the first 12 months of production and more than 1 million units were sold by March 1966. Since its debut, this iconic car has sold more than 9 million. 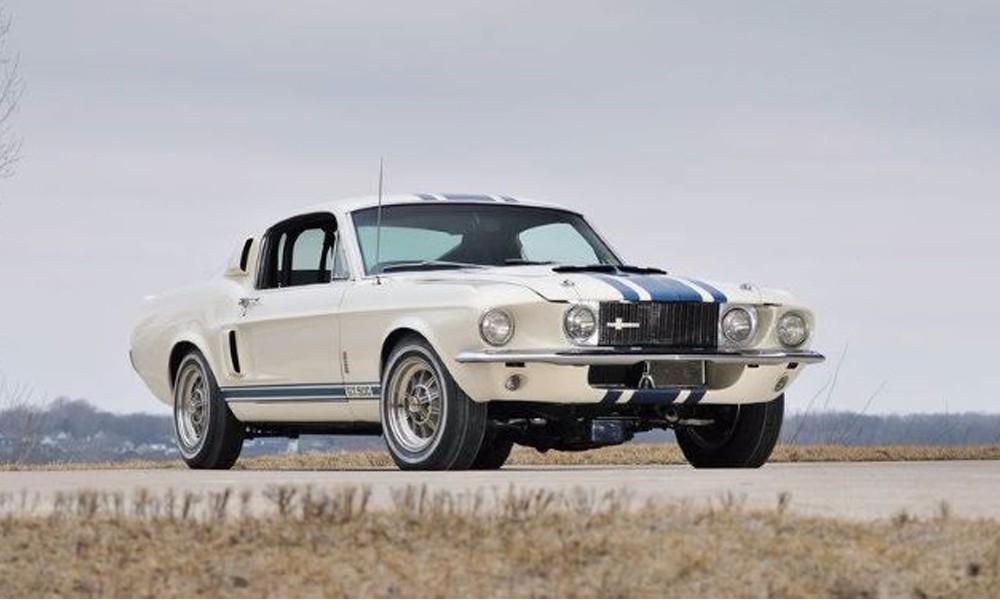 The most expensive Mustang ever sold went for a whopping $1.3 million in 2013 at the Mecum Auction in Indianapolis. Why did this particular Mustang go for such a high price? Well, it was the rare 1967 Shelby GT500 Super Snake. Not only was it the first Mustang to be called a Super Snake, but it was the only one of its kind. Originally, only 50 were supposed to be made, but its $8,000 price tag didn’t sit well with potential buyers and thus only one was made. In addition to its one-of-a-kind status, this pony car also had a 427-cubic-inch V8 engine from a Ford GT40 race car under its hood. 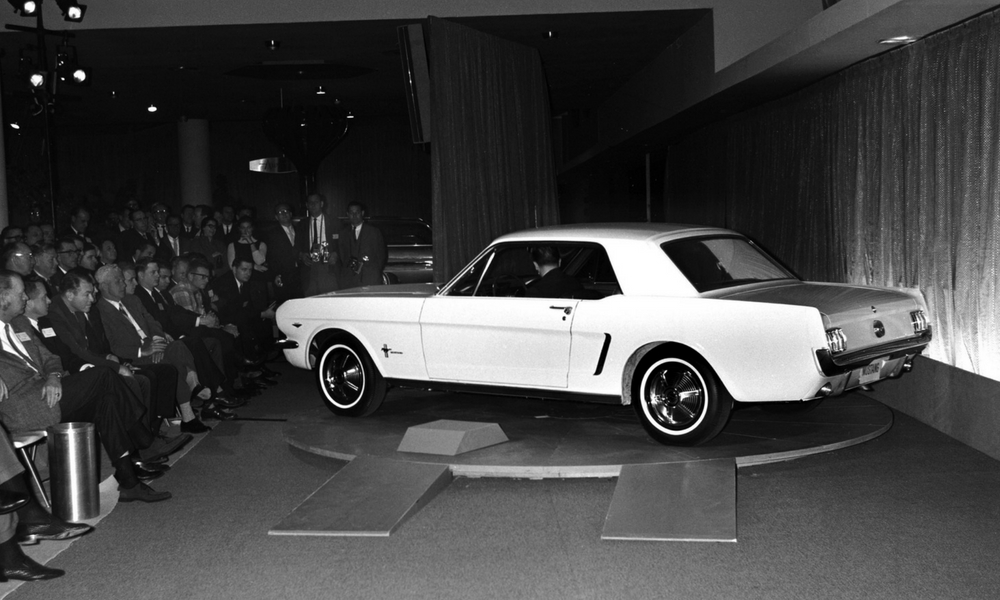 Plenty of Mustang fans talk about the first wave of the car, referring to them as 1964.5 or 1964 1/2 models. But, the fact is those were officially all 1965 Mustangs, which is evidenced by their VINs. Ford never advertised 1964.5 Mustangs.

Before you think all these people are delusional or that you’ve been lied to, know the “1964.5” models were the early 1965 models. Ford made a number of changes to the car for the latter part of 1965. For one, the generator was ditched in favor of an alternator. The 1964.5 cars could be outfitted with a 260cui engine, while the smallest V-8 for 1965 was 289cui. If you look closely, the rounded edges at the front of the hood changed for the 1965 model year. Buyers of the 1965 model were able to add the Décor Group Option, known as the Pony interior.

So, the term 1964.5 Ford Mustang might not be entirely accurate, but it does help differentiate between the early and late 1965 models. 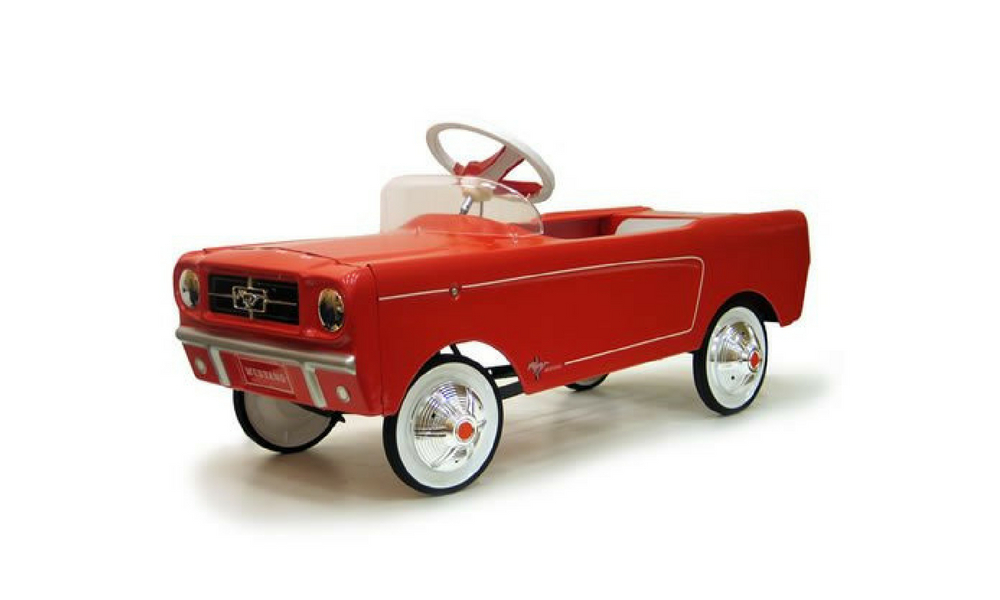 Released just in time for Christmas of 1964, Ford authorized the creation of a “Midget Mustang” or a toy pedal car patterned after the original Mustang. The car debuted at the New York World’s Fair, capturing the imagination of kids and parents alike. Ford sold the toy at dealerships across the United States. The cost was just $12.95, which even for back in the day was a steal. The automaker used the promotion as a way to get people into dealerships and sell even more of the real cars.

To say the pedal-powered little Mustang was a sales success would be an understatement. About 93,000 were sold during that first Christmas season. Plenty of kids woke up to one sitting under the tree on Christmas morning, making it the must-have toy of the season. Their popularity is still high today, with many people fully restoring and even upgrading the original toys and collectors paying top dollar for them.

7. Top of the Empire State Building 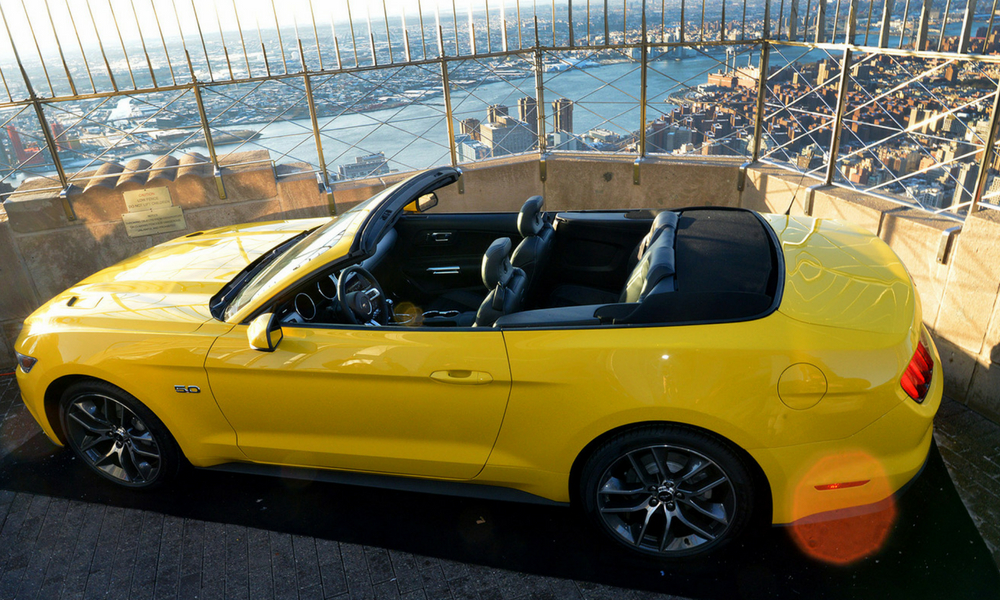 Maybe you caught the news in 2014 when Ford put a Mustang GT convertible on the observation deck of the Empire State Building. It was in commemoration of the pony car’s 50th anniversary and its public debut at the New York World’s Fair in 1964.

The task wasn’t easy, even though the car wasn’t complete but instead was essentially the chassis, body, and interior. It took a team of engineers weeks to figure out how to take apart the Mustang GT and take it up in pieces on service elevators, since cranes and even a helicopter wouldn’t work with the building’s design. They even practiced taking the car apart and reassembling it in the early morning, so everything would be ready and presentable on time. Ford took full advantage of the press surrounding such a marvelous event, splashing photos of the gleaming vehicle with the Big Apple spread out behind it.

What most people don’t realize is this wasn’t Ford’s first time doing such a thing. Back in 1965 the Blue Oval chopped up a Mustang and put it on display in the same spot.

When the S550 launched in 2015, Ford revealed the top paint colors for the car in different regions of the world. While red, white, and blue have historically been popular and iconic for the United States, there was a shift. Black was the No. 1 paint color, followed by Magnetic Metallic. Ruby Red landed in third place. Of course, “murdered out” Mustangs have been a trend in the U.S. for some time, so that might have been partly why.

While Americans went for understated, Europeans and Chinese wanted something that would stand out. In both of those markets Race Red was the top color choice initially. Black was still a popular option, coming in second place for Europe and third in China. Europeans’ third choice was Deep Impact Blue, while Oxford White was the second most popular for Chinese shoppers.

9. A Different Name in Germany 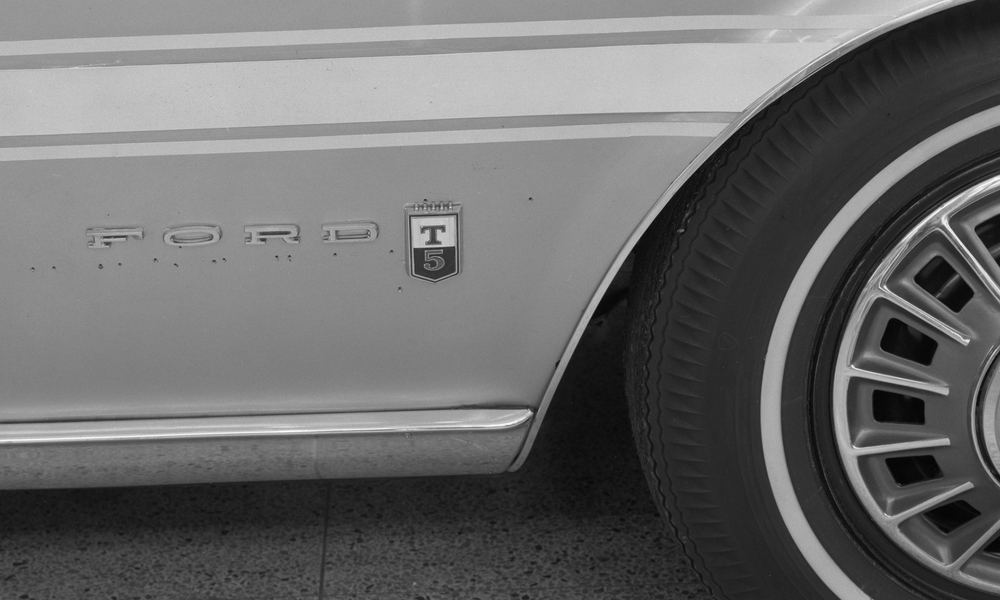 Back in the day, Ford couldn’t sell Mustangs in Germany. It wasn’t because of safety or emissions regulations, but instead the name “Mustang” was taken. Krupp Motoren and Kraftwagenfabriken made a big commercial truck called the Mustang from 1951 to 1968.

Ford didn’t want to pay the hefty chunk of cash it would’ve taken to buy the rights to the Mustang name in Germany. Instead, it changed the car’s name to T5 for that market. That alpha-numeric code actually was used by engineers during the vehicle’s development. All Mustang badges, including the hubcaps, had to be removed from the cars. What’s more, Ford wasn’t consistent on how it wrote the T5 name, sometimes using a hyphen and sometimes not. Finally, in 1973 Krupp’s copyright expired. 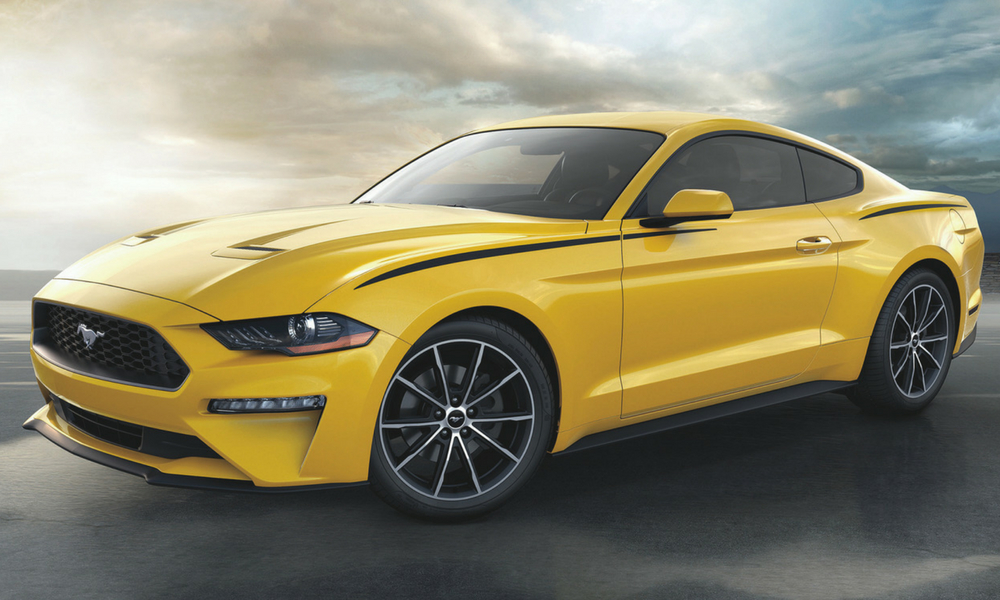 The first yellow paint option for Mustangs was introduced clear back in 1965, called Springtime Yellow. Even though the color wasn’t chosen too often by shoppers, Ford kept it for the 1966 model year. While a mere 1,503 Canary Yellow Mustangs were sold in 1993, since the color was only used on Limited LX models, a whopping 11,471 Zinc Yellow Mustangs were scooped up by shoppers in 2001.

Seeing a Ford Mustang with a yellow paint job is actually quite rare, with low production numbers for most model years. Some people who own these cars can be almost fanatical in their dedication. There’s a Yellow Ford Mustang Registry, which boasts about 9,000 members. It was founded fairly recently in 2001 and organizes events, including participating in the famous Woodward Dream Cruise.

Continue Reading
You may also like...
Related Topics:Ford, Ford Mustang