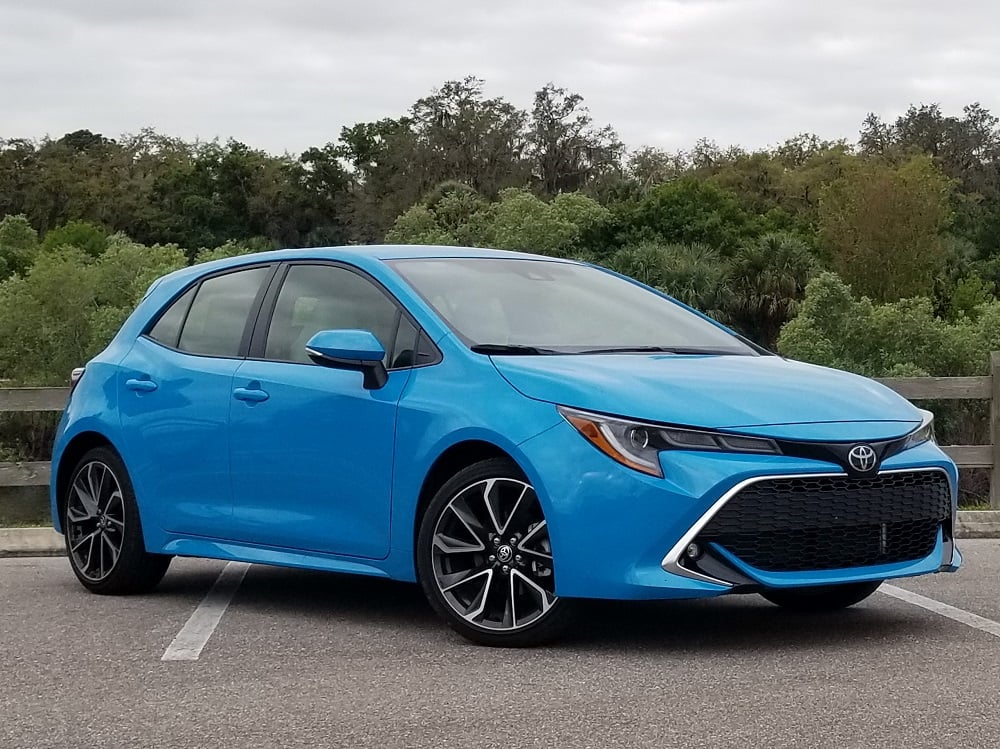 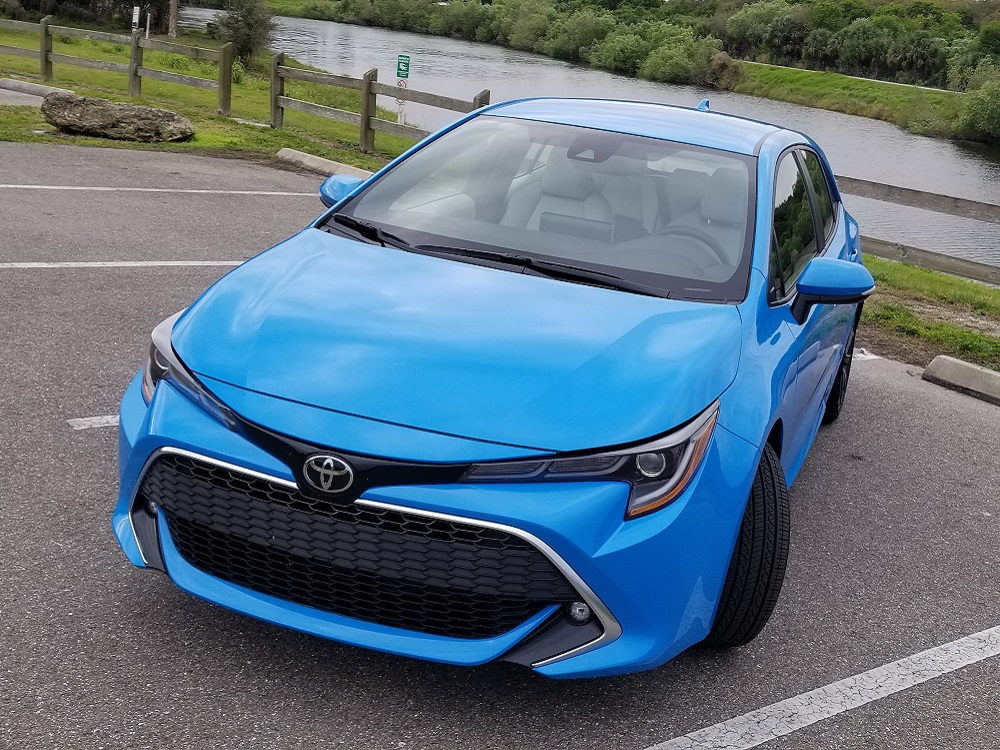 The Toyota Corolla Hatchback is all-new for 2019, borrowing the ‘Rolla Hatch idea from the Scion iM turned Corolla iM from previous years. Other than the Corolla nameplate, this hatchback shares very little with its predecessors.

Up front, Toyota installed squinty, angry-looking headlights with stunning LED accents that deliver a striking nighttime stare. The headlights are connected by the obligatory gloss-black Toyota applique that directs your eyes downward to the massive black air inlet with a satin-silver surround. This creates far and away the sportiest nose in the segment, but there’s even more around back. 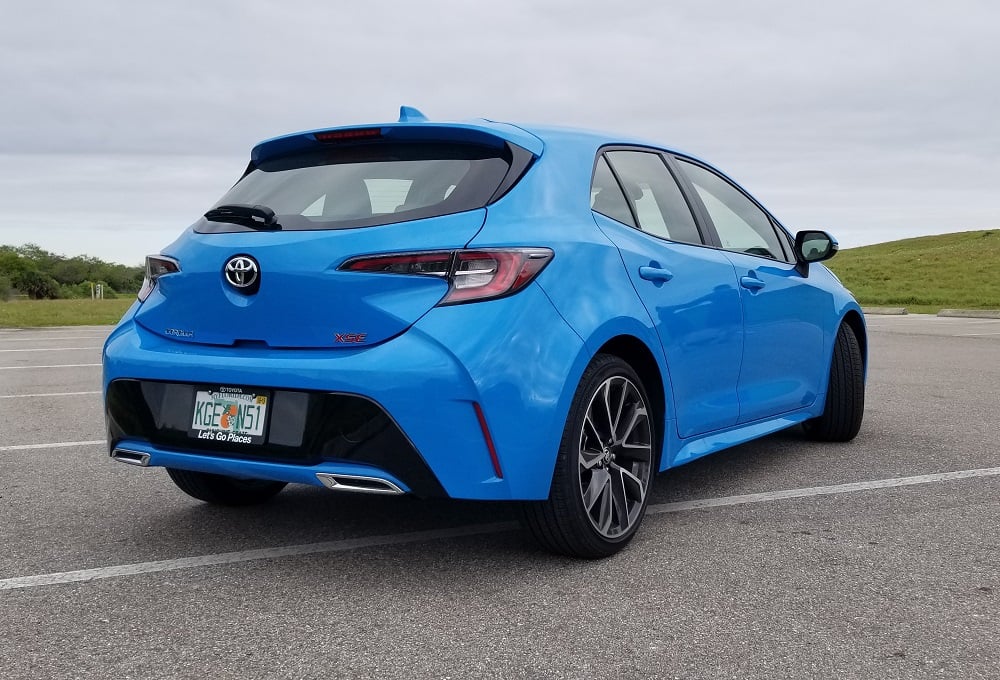 In the rear, the vaguely Supra-esque taillights feature a similar squint as the headlights, tying the two ends together. What really makes this back end look great is the large roof-mounted spoiler, the gloss-black insert on the bumper, and the forward slant to the rear hatch. Sure, the slanted liftgate gobbles up a little cargo room, but it’s worth the sacrifice.

This all ties together to create a sharp profile that boasts a longer-than-normal hood and sporty 18-inch wheels rolled up in low-profile rubber.

Inside, the style continues with an interior I cannot believe is part of the Corolla lineup. It boasts two-tone cream-and-gray leather-and-cloth upholstery that looks upscale and bolsters that hold you nicely without getting uncomfortable. The dash and door panels also get a splash of this cream leather, keeping all the hard plastics far from any touch points.

Throughout my entire week inside this small hatchback, I had to remind myself constantly I was driving a freaking Corolla. 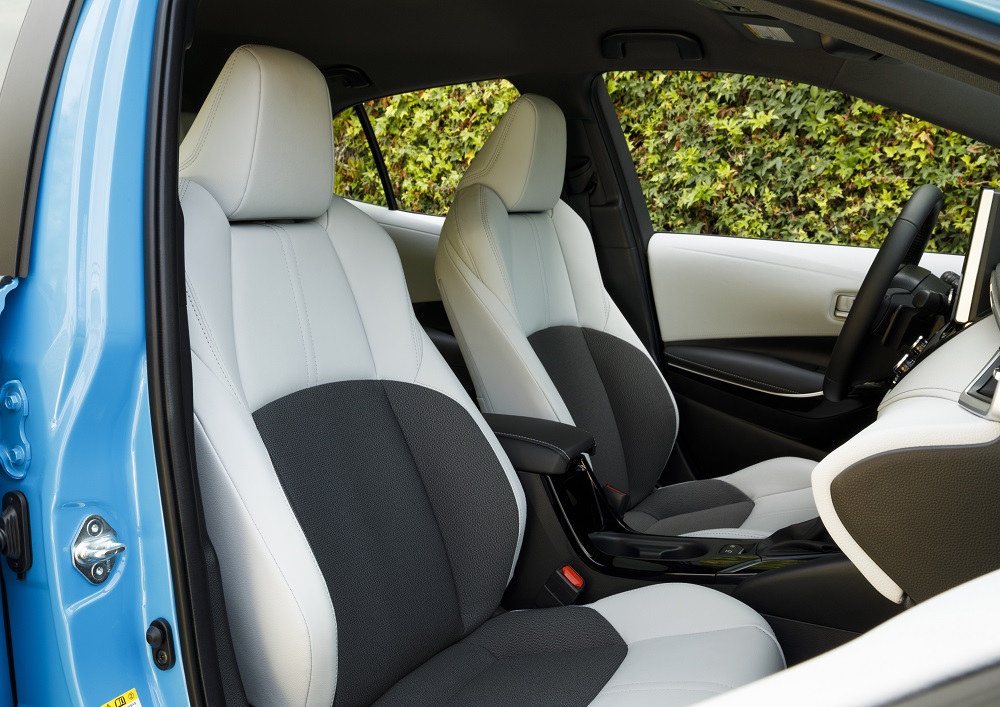 Up front, the seats are nearly perfect with ample cushioning, perfectly angled headrests. There is also limited hard plastic on touch points and plenty of visibility at all corners. 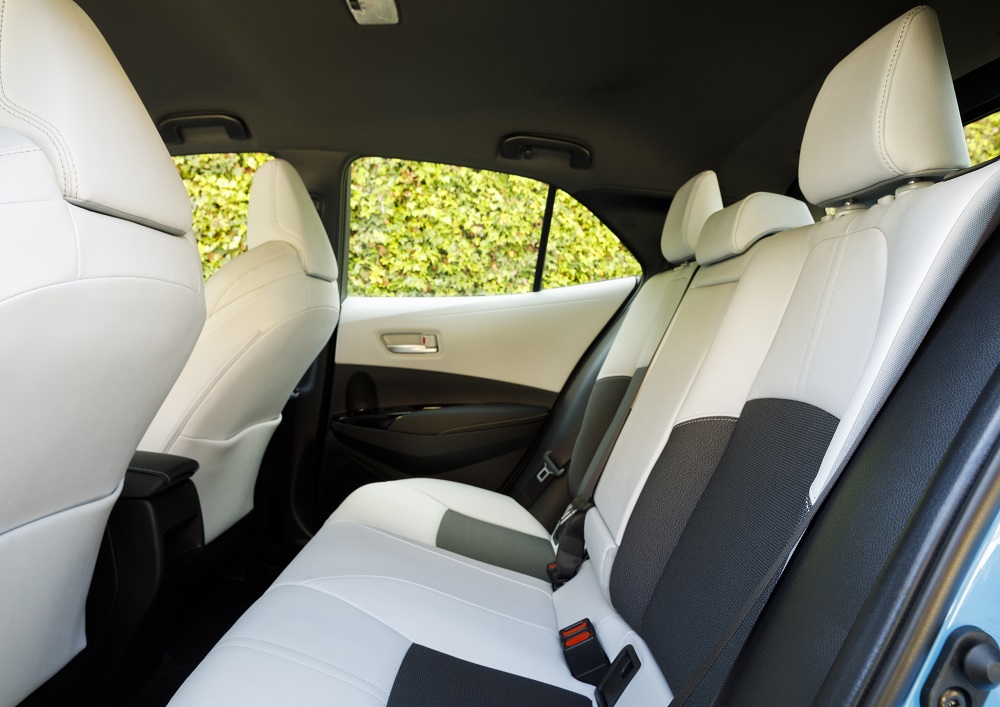 In the rear, things tighten up a bit. First, the rear doors do not open very wide, making installing a car seat a task. Plus, the rear seats have just 29.9 inches of legroom, which matches Toyota’s resident sports car, the 86. This makes hauling anyone taller than my 5’7” self a tight fit.

With such a tiny rear seat, you’d think Toyota did this to expand cargo room. Nope, the Corolla Hatchback has just 18 cubic feet behind the rear seat, and I think that is a little generous. 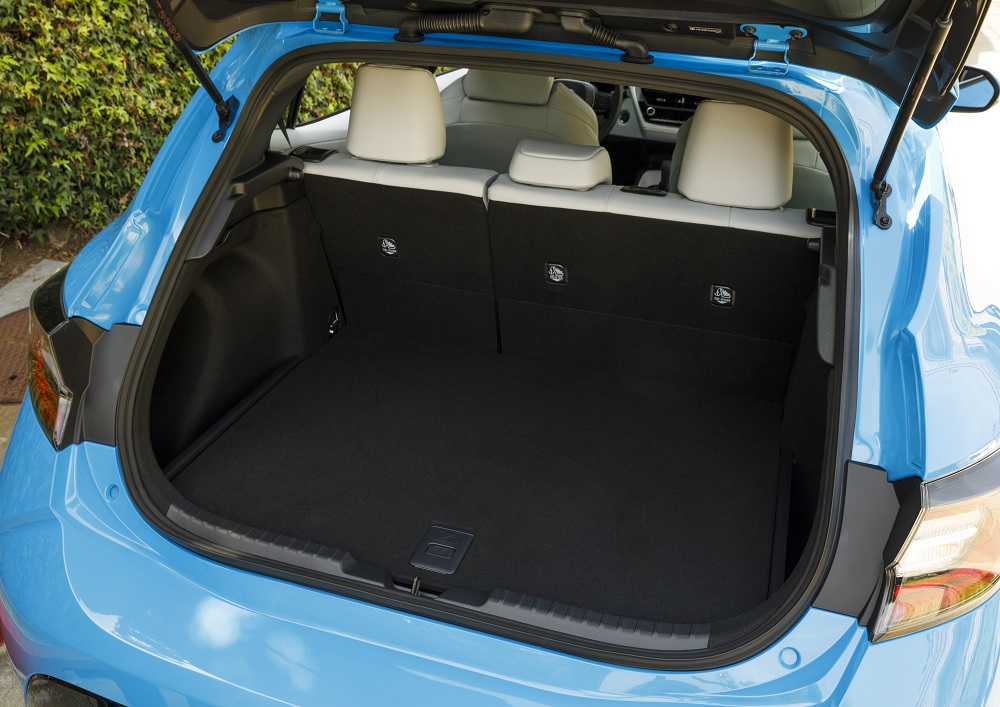 Ride quality is decent, as the Corolla Hatchback XSE’s suspension does a good job absorbing most bumps. That said, its low-profile tires allow a fair amount of noise to travel from the road and into the cabin. It’s not obnoxious, but it is noticeably louder than others in the class. 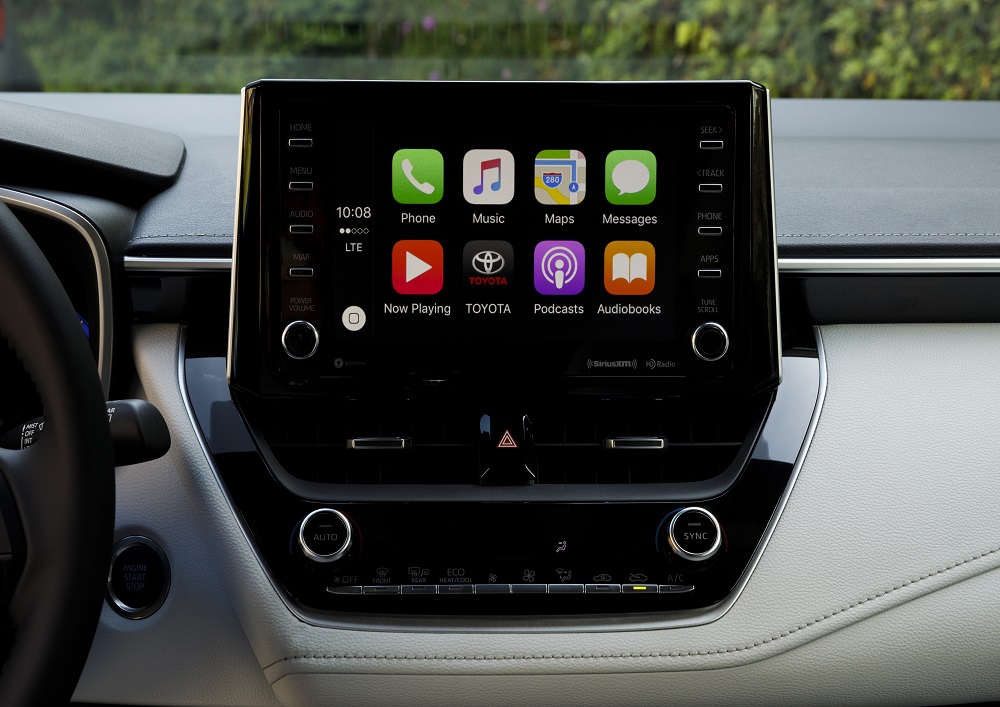 In the center of the dash is an 8-inch screen with the Toyota Entune 3.0 system. I appreciate the large screen, but I initially thought it was a bit too high on the dash and a distraction. After a week behind the wheel, I can see that Toyota put it level with the gauges to reduce eye movement when looking over at the screen for a second. As for its function, it is about as clunky as every other Entune infotainment system, The menus are confusing, the physical buttons seem to do whatever they want and sometimes nothing, and the Entune smartphone app is basically a useless space gobbler on your phone.

None of the 2019 Corolla Hatchback XSE trims come standard with a native navigation system — you must opt for a CVT-equipped XSE model and get the $1,600 XSE Preferred Package to get native navigation —  but it has Scout GPS Link. I own a Toyota RAV4 Hybrid with the older version of GPS Link. I used it twice and never touched it again, so I curbed my excitement as I went through the insane dance of downloading several apps to get this thing to connect to my Galaxy S8.

Once I finally got everything connected and fired up the Scout GPS Link, I noticed the moving maps feature was disabled, and the app told me to connect it via USB cable to activate it. I traced my charger cable back to the only USB port I could find, which was in the center console, only to find it was already connected. After several plugs and unplugs, I gave up and did the least manly thing I could do: I grabbed the owner’s manual.

Turns out, there is an unmarked USB port under the dash and behind the shifter. Um, thanks for making that crystal clear, Toyota. Then again, maybe I should have listened to my wife and just read the dang manual earlier.

Once connected, the new Scout GPS Link was impressive, as it looked just like a native system and responded well to voice commands. There are some issues with it, though. First, the USB connection kept failing, leaving me plugging and unplugging constantly to reset it. This could be an issue with my phone, but you’ll want to check it out yourself. Second, the navigation volume is preset to one level and you cannot hear it over the meh audio system. Overall, though, I walked away impressed with this updated GPS, which is free for the first three years and $24.99 per year after that.

While the Scout GPS Link is a nice alternative, Toyota needs to work a little harder at getting a better option to appeal to the younger crowd. Sure, there is Apple CarPlay, but adding Android Auto to the mix or adding a more accessible native navigation system would be great. My gut says one of these changes will come in the 2020 model. 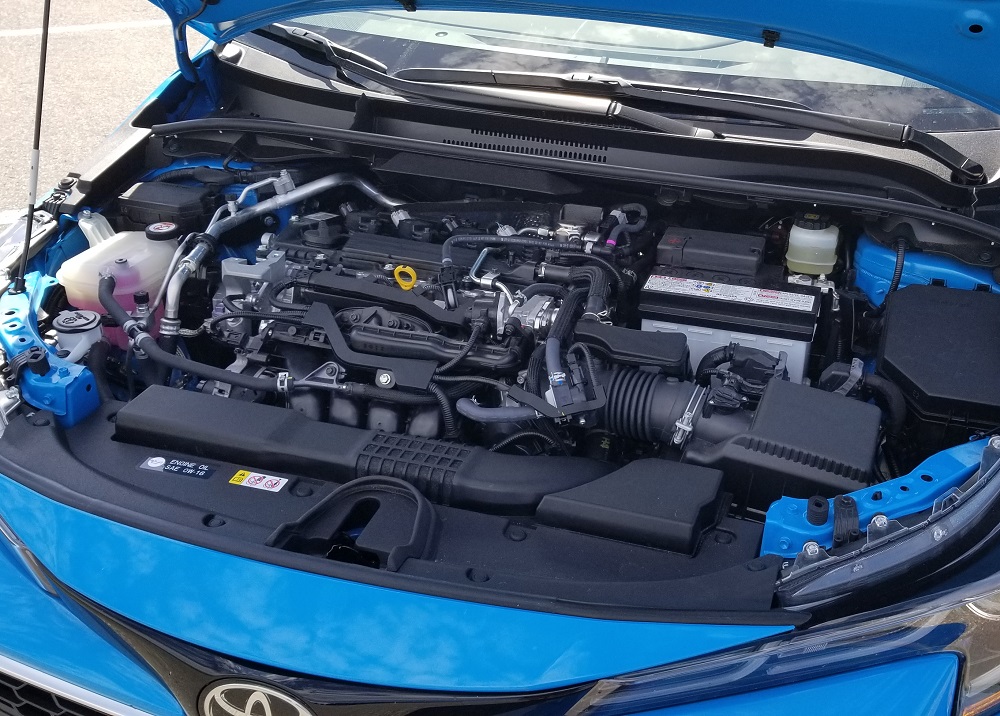 OK, I hate the Corolla’s engine. There, I said it. Sorry, Toyota, but the standard Corolla sedan’s 1.8-liter engine is outdated, overmatched, and needs to die. The 2019 Toyota Corolla Hatchback, though, uses a new 2.0-liter Dynamic Force four-cylinder engine that cranks out 168 horsepower and 151 pound-feet of torque, which crushes the old 1.8-liter by 36 horsepower and 23 pound-feet. Plus, this engine is more than happy to rev out to its redline without a complaint. In fact, its peak power comes in at 6,600 rpm, which is just a few hundred revs short of its redline.

Sure, you have to wring it out to get all the juice from this new powerplant, but it never feels gutless as the revs climb. Not even the sportier Toyota 86 is this comfortable near the rev limiter.

The gearbox in my tester was the right pick: a six-speed manual. While this was far from a notchy sports car transmission, the shifts were always clean, crisp, and accurate. The clutch is a bit too light and lacks any real feeling, but it was fine once I got the hang of it. Putting this transmission back into my favor was the magical “i-MT” button that activates rev matching that blips the throttle just a bit for clean downshifts sans heel-toe action.

My high-tech butt-in-seat-o-meter pegs the 2019 Corolla Hatchback’s 0-to-60 time in the mid-seven-second range. This is a whopping 2.5 seconds quicker than the wheezy Corolla iM that preceded it.

In the corners, the steering system is quick and delivers nice feedback, but the Corolla Hatch is a little too top heavy for its chassis, resulting in some body lean. 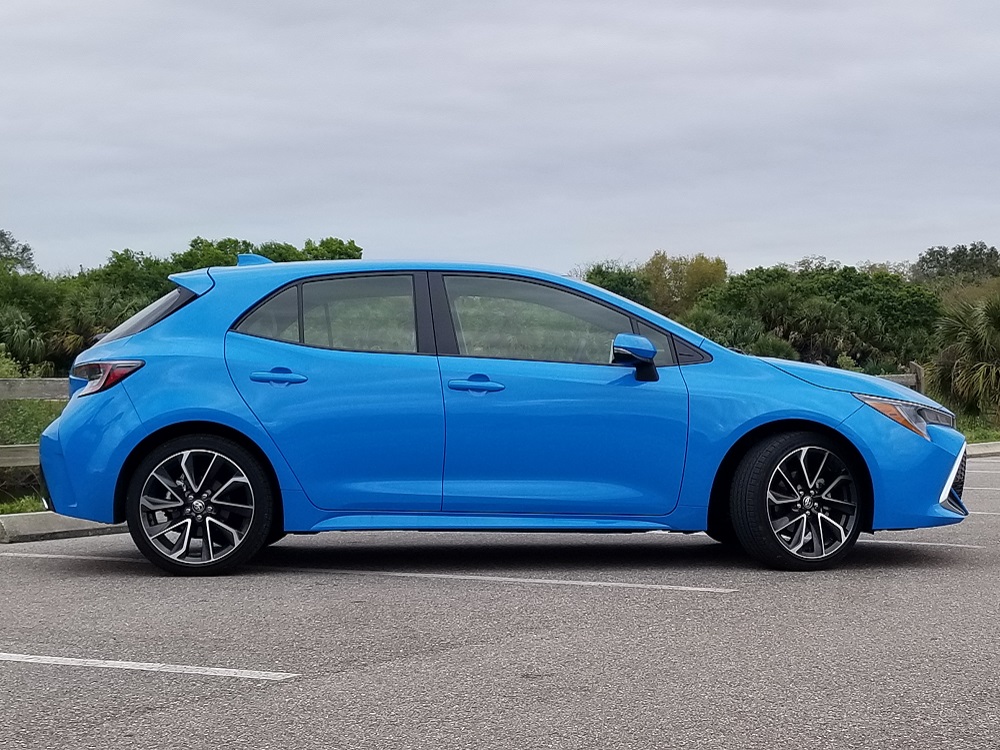 The Toyota Corolla Hatchback shatters the boring-sedan mold the Corolla has used for as long as I can remember. It is sporty, fun to drive, comfortable, packed with features, and still fuel efficient. It is almost the perfect compact hatchback if it wasn’t for its ridiculously tight rear legroom and cargo area. If you can live without a spacious rear seat, this hatchback, which ranges from $19,990 to $22,990, is a great buy. 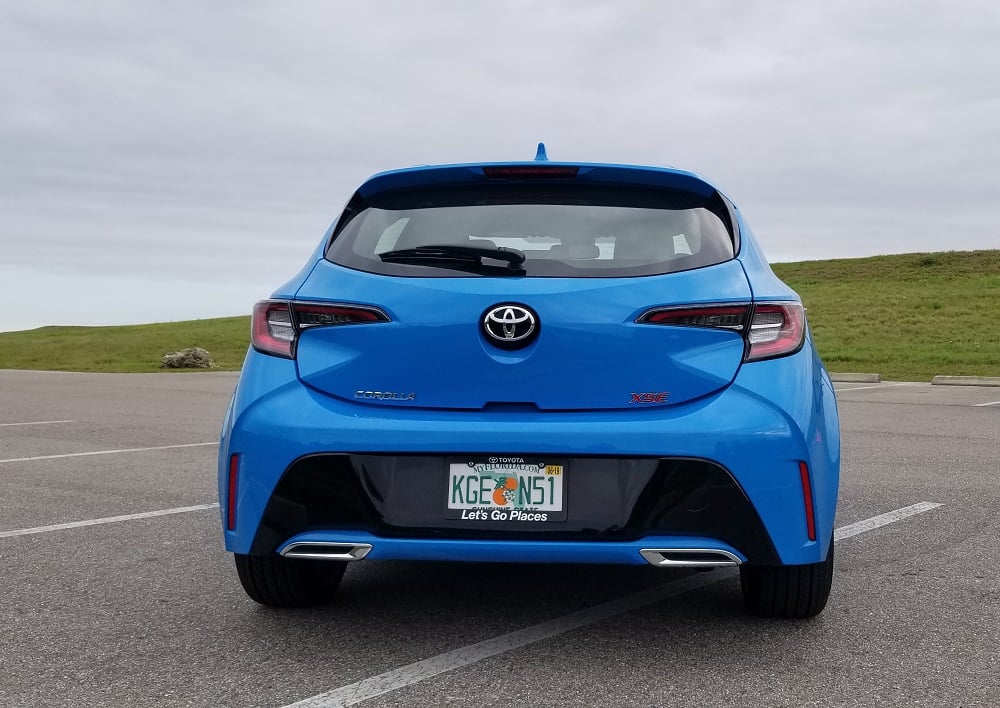 Are there hatchbacks with more cargo room and rear seat room than the Corolla Hatchback? Of course there are. The 2019 Honda Fit kills it in both departments. But are there any other hatchbacks that combine this much fun and style in such an affordable package? I can’t really think of any. If I was in the market for a compact hatchback, the Corolla Hatchback would likely be my first and last stop. I love its rare mixture of style, performance, luxury, and value.