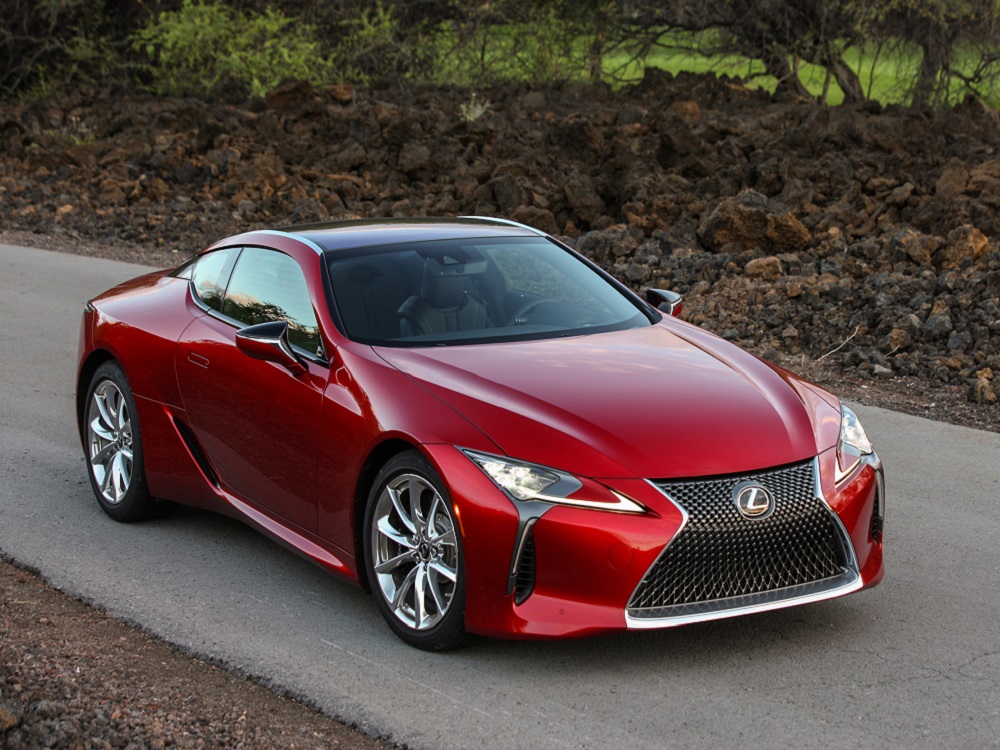 Last year, Lexus gave me a crack at its LC 500h hybrid grand tourer, and I walked away mostly impressed. Sure, it wasn’t perfect, but it was a nice treat. This year, I specially requested the fully caffeinated LC 500 with the snarling V-8 powerplant, and Lexus was happy to drop one off in my driveway for the week.

After a week of terrorizing the streets of the Tampa and St. Pete area in this obnoxious beast, here’s what I think of it. 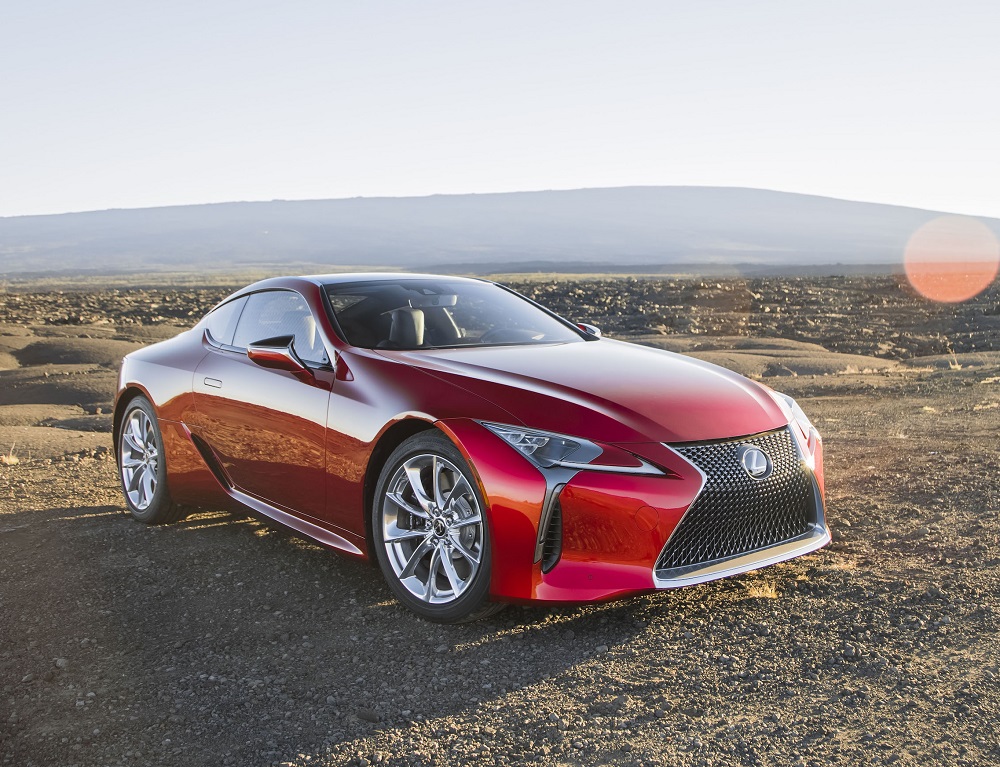 There isn’t much I can say about the looks of the 2019 Lexus LC 500 that I didn’t say about the LC 500h last year. This thing is drop-dead sexy. Even my wife — who despises anything sporty — fell in love with it instantly. From the long nose to the stubby backside to the pop-out door handles and wide hips, this thing begs to be driven. I actually felt guilty leaving it sitting while I worked, but I gotta earn a living.

Inside the sexiness continues with a light brown leather-and-suede-like upholstery that looks and feels like a million bucks. For a $92,000 grand tourer, Lexus did a great job giving it all the bells and whistles you need while maintaining a relatively clean and clutter-free cabin. There are no collections of buttons that stand out like a sore thumb or ill-thought-out design cues. It just flows perfectly. 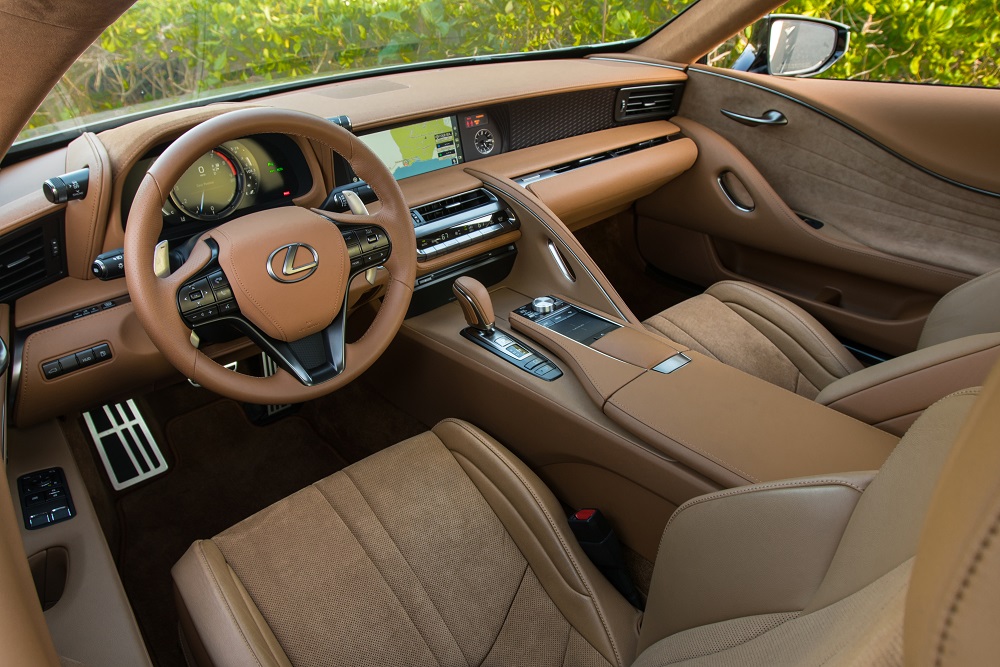 All this style shows in the stares-per-hour measurement too. I calculated about five stares per hour and at least one jaw-drop per hour. My wife initially hated all the attention, but she eventually fell victim to the look-at-me virus that comes with rocking a stunning rig like this.

If there is a complaint about the LC 500’s styling, it’s the limited visibility out the rear window. This is a common thread in the grand tourer segment, though. 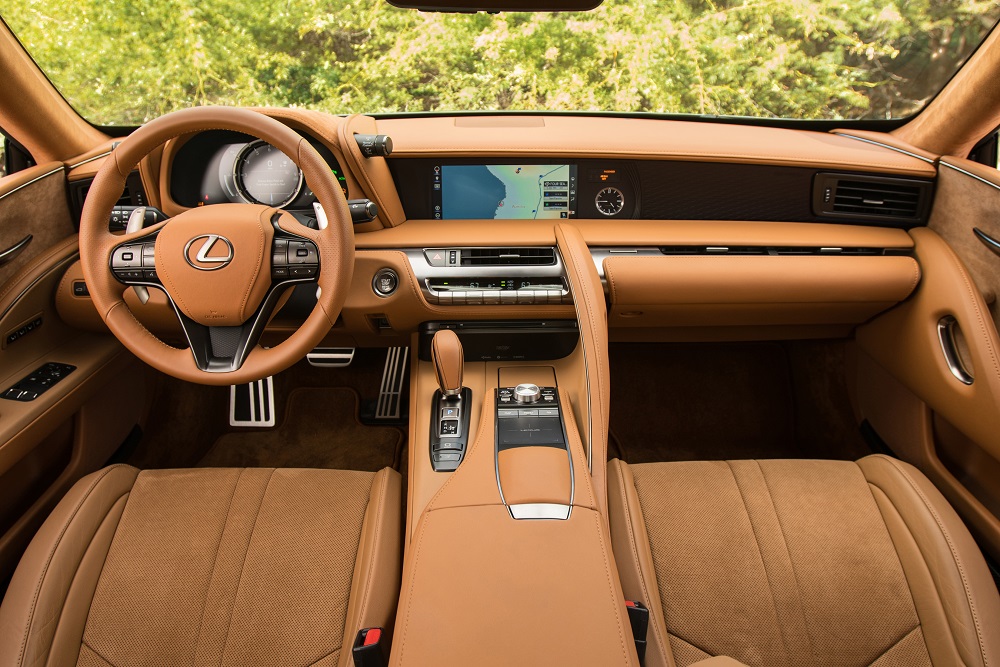 In the front seats, you are the king of the world. Sorry, Leo, I win in the LC 500. The front seats have loads of padding and are just firm enough. The bolstering holds you in place without the annoying-aunt-like squeeze-the-life-out-of-you hug some cheaper seats give you. And the 10-way power driver’s seat has just enough adjustment options to get you in the perfect position without getting lost in a labyrinth of adjustment options.

In the rear seats, life is a lot different. This grand tourer offers just 32.5 inches of rear legroom, and I think someone was a little generous with that measurement. I am all of 5’7” on a good day, and I barely crammed my size-10 shoes under the rear seat that I positioned to fit myself. But these seats do make great grocery holders, and you will need them with its 5.4 cubes of luggage space.

While the trunk may be small in overall space, it is deeper than its measurements allude to. I managed to cram five 5-gallon water-dispenser bottles back there. It was a tight fit, but they fit nonetheless. 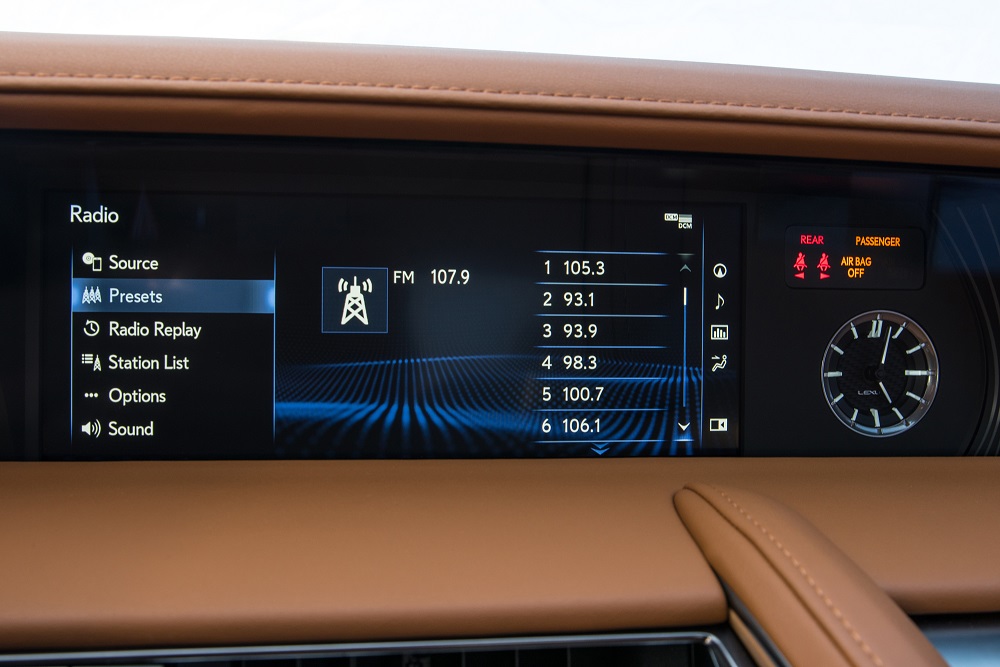 The great thing about grand tourers is automakers understand they need to be fast, but they also know buyers want features. Lexus delivered just that with the 2019 LC 500. Standard tech features include Apple CarPlay, Amazon Alexa, in-car Wi-Fi, SirusXM, heated and ventilated seats, dual-zone climate control, a 12-speaker audio system, a 10.3-inch screen, and much more.

My tester had a few other goodies in it, including a head-up display and a crisp 13-speaker Mark Levinson audio system.

On paper, the 2019 LC 500’s tech is 95 percent great, but as a Lexus model, the LC has the Remote Touch Interface infotainment system. This system remains the bane of my existence when testing Lexus cars, and it seems to get worse each year. The cursor jumps around at random like a demented flea, seeming to always go above or below your intended letter on the virtual keypad. These infotainment systems are supposed to make life easier, but I am thinking Lexus enjoys watching people suffer through this technical abomination. 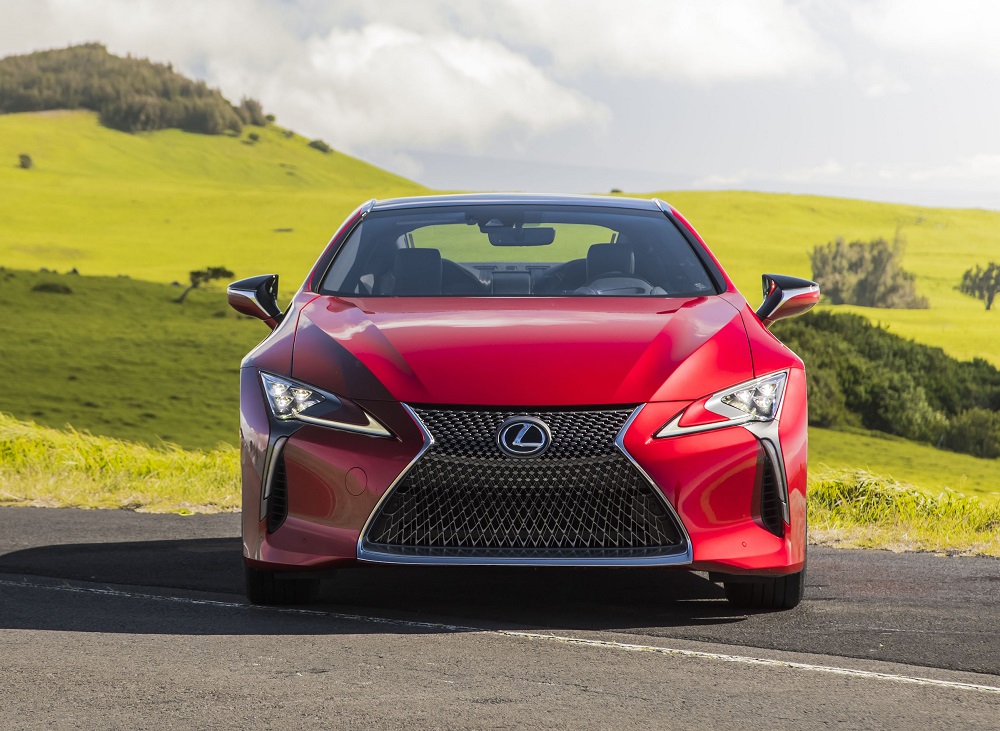 The LC 500 looks great, but the proof is in what it can do on the road. This rig comes with a 5.0-liter V-8 power plant that forgoes the turbocharges of today for raw, naturally aspirated power. It rings in at 471 horsepower and 378 pound-feet of torque, and this power heads through a snappy 10-speed automatic transmission with paddle shifters for a 4.4-second sprint to 60 mph.

This puts it right about on par with its rivals, splitting the difference between the M6 and the S 560 Coupe. What’s more, the LC 500 is over $20,000 cheaper than its German counterparts.

Handling is also incredible, especially for a coupe that tips the scales at nearly 4,300 pounds. That said, even with all the safety nannies turned to lazy-babysitter mode, there was still a lot of supervision that kept the backside in check and rubber smoldering to a minimum. This babysitting is great for day-to-day driving, but sometimes I want to be in control. 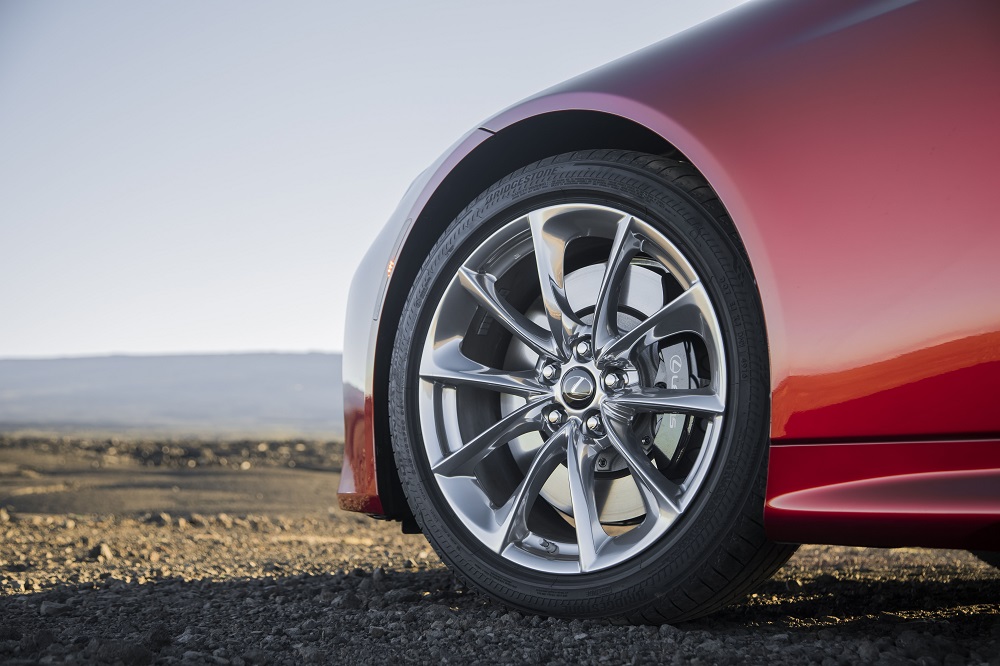 Making the LC 500 even more fun to drive is the soundtrack that accompanies its 4.4-second sprint to 60 mph. That naturally aspirated V-8 screams under heavy throttle and has no reservations with letting out a triumphant crackle between shift. Slowing down is equally fun, as the LC rev matches your paddle-shifted downshifts and belts out even louder crackles and pops. What’s more, there is no fake Lamborghini-like sound piped in like in the LC 500h — that sound it all Lexus V-8.

Fuel economy? Ha! If you’re looking here, you’re doing it wrong. The EPA rates the LC 500 at 16 mpg city, 25 highway, and 19 combined, but the EPA also doesn’t make every green light the full-throttle affair Lexus intended you to. 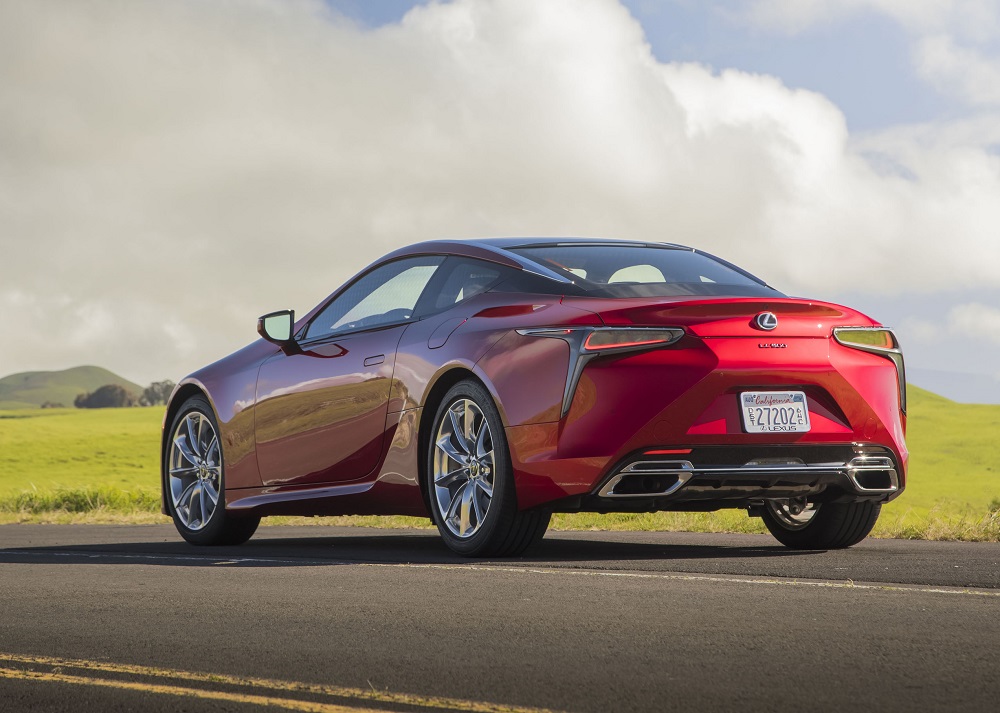 The 2019 Lexus LC 500 is not only an amazing piece of automotive engineering, but it is also an insane value. Sure, $92,000 may not sound like a value to many people, but compared to its competition, which mostly sit in the $120,000-plus range, it offers all the power and speed with a big price advantage. My tester came with over $12,000 in added options, making sure all the luxury bases were covered, and still chimed in just under $105,000

If I had $100,000 burning a hole in my pocket, I wouldn’t hesitate to walk into my nearest Lexus dealer, slam the cash on the salesperson’s desk, and say, “give me one in red.” The LC 500 is one of the best grand tourers money can buy for under $100,000, and no one can argue that. Sure, there are better ones available, but not in this price range. Nicely done, Lexus. Nicely done, indeed.