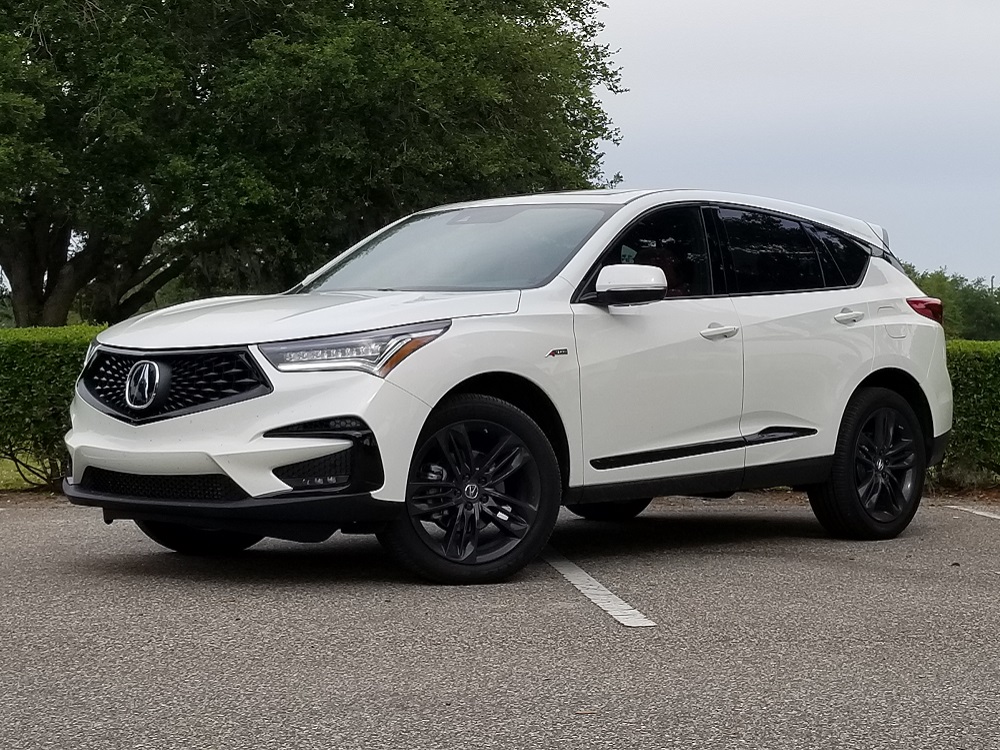 Turbocharging small crossovers may seem like a relatively new fad, but the Acura RDX has been doing it since 2007. What’s more, it’s also always provided tons of value relative to its BMW and Mercedes counterparts. Fast-forward to 2019, and we have the debut of the third-generation RDX with an all-new look, tons of tech, and a potent turbocharged four-cylinder with hot hatchback roots.

Is the RDX still a leader in the small luxury-crossover space? I spent a week in the 2019 Acura RDX A-Spec to find out. 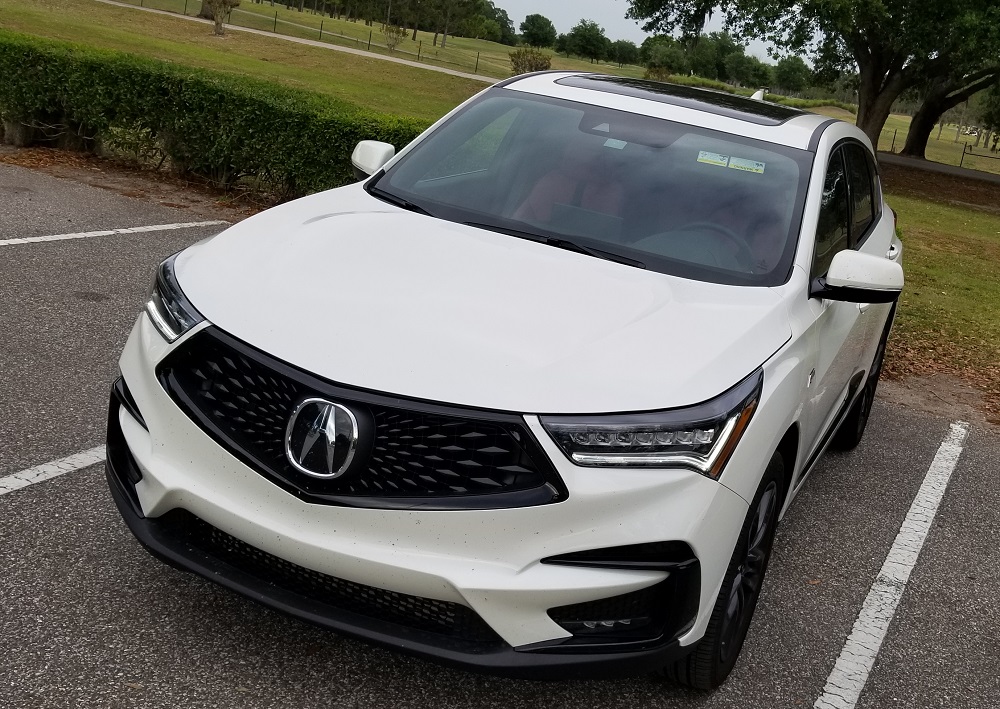 The 2019 Acura RDX is all-new. It retains the small-footprint it’s had since its 2007 debut, but its looks are completely revamped. These new looks are not revolutionary, but they are a nice evolution of an already-stylish compact crossover.

Starting up front, Acura finally rid itself of one of its not-so-hot styling relics: the beak-style grille. It replaces this with its new signature diamond pentagon grille that adds visual depth to the nose. The 2019 RDX also gains all-new LED headlights and tall ridges on the hood. Being the A-Spec model, my tester adds touches of gloss black up front on the grille and the fog light surrounds. 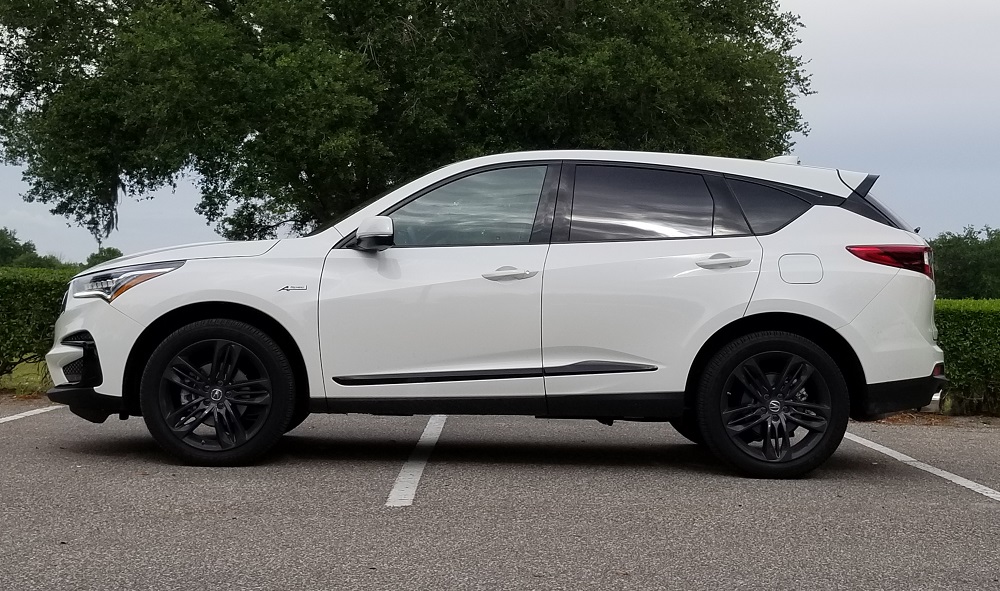 Things tone down a bit from the side, but there is still plenty of style for the eyes to take in. It all starts with a swooping roof that delivers a sporty profile and black insert on the D pillar that creates a floating-roof design. Down below, a striking lower-door applique breaks up some of the monotony. In some models this strip is chrome, but in the A-Spec model, it is gloss black. Rounding out the profile view are 20-inch Shark Gray wheels. 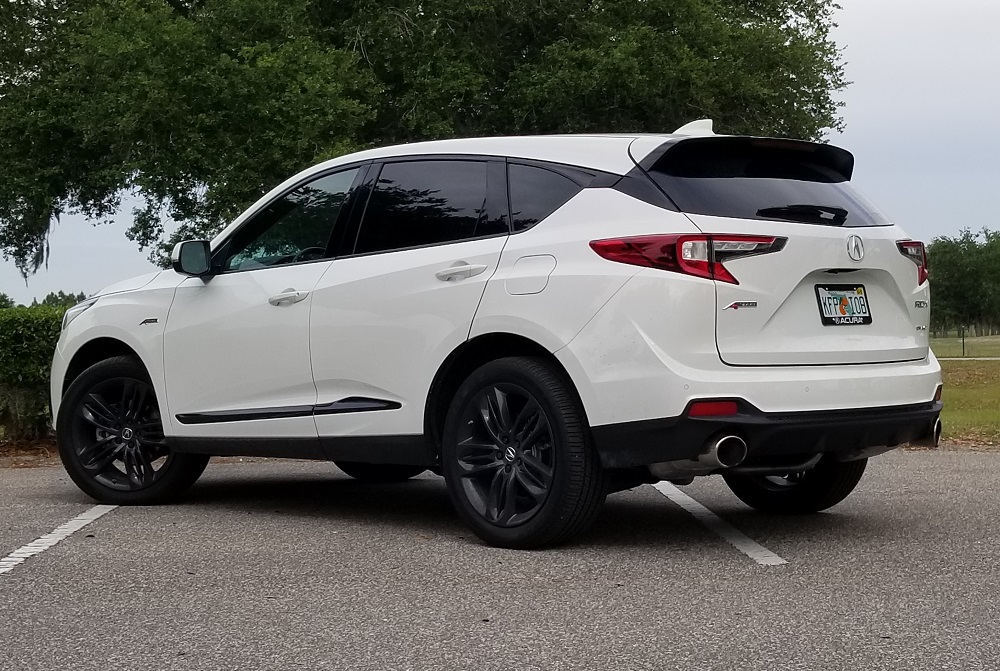 Around back are new hook-shaped LED taillights that are quick to grab your eyes. Heading downward, you can see even the license plate area gets sharp body lines while a set of large, circular exhaust outlets polish off the sporty look of the 2019 RDX A-Spec.

Inside, the 2019 RDX does a great job creating some separation between the front seats, but they are not so far apart you feel like you’re wrapped in your own cockpit. The center stack and steering wheel are a little busy with tons of buttons, wheels, and knobs, so there is somewhat of a learning curve. Fortunately, Acura laid them out tastefully so they never make it look cluttered. My A-Spec model came with stunning red seats with black suede inserts and an A-Spec-badged steering wheel for an added dose of style. 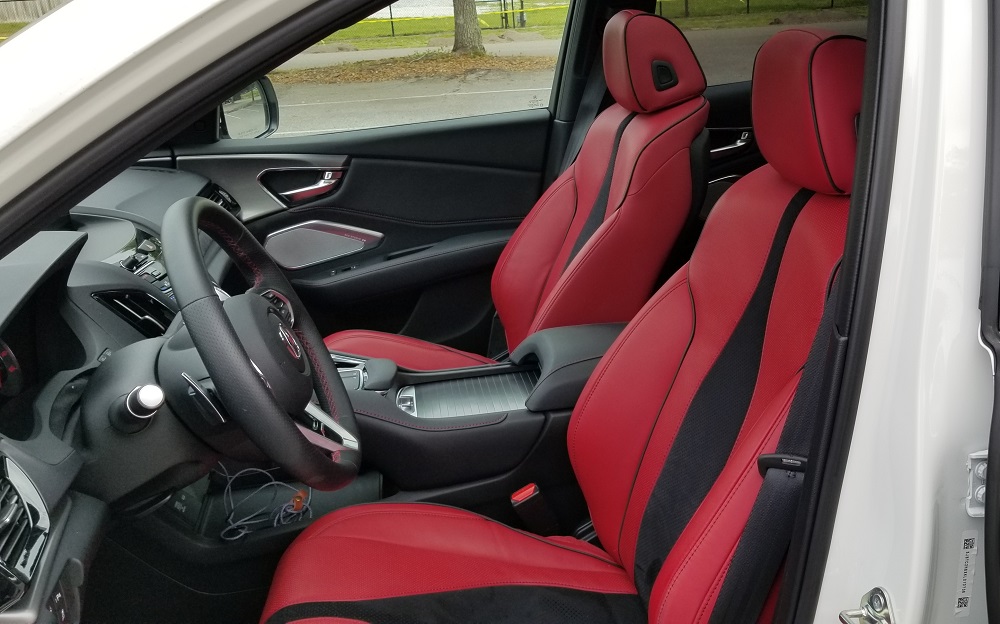 The 2019 Acura RDX delivers the goods in the comfort arena with well-padded but firm front seats. These seats also have 12-way power adjustment, giving you plenty of fine-tuning capability to find the perfect spot. And once you find that perfect position, you can save it so you never have to spend time readjusting your seat.

Your rear-seat passengers enjoy equally comfortable seats that offer up to 38.4 inches of legroom. And if you have young kids, strapping in the car seat is relatively easy with its flap-covered LATCH tether points.

The RDX’s cargo hold is not massive at 29.5 cubic feet with the seats up and 58.9 cubes with the seats folded, but it is near the top of its class. The wheel wells intrude a little bit, which make filling the cargo area to its fullest a little tricky. My wife and I managed to stuff four 21-by-21-by-21-inch boxes in the rear with the seats folded, but the two last boxes wouldn’t fit between the wheel wells, so we had to put them tandem. Ride quality is top-notch in Comfort mode, but Sport and Sport+ can get a little rough. The same goes for in-cabin engine noise, though that Civic Type-R-sourced 2.0-liter engine sounds great.

The 2019 Acura RDX is a tech marvel with all the latest and greatest the brand offers. It starts up front with its 10.2-inch infotainment display that is clean, clear, and doesn’t wash out in sunlight.

You control this infotainment system with a concave-shaped touchpad that acts as a traditional touchpad like on a laptop, but you can also tap your finger in a spot on the pad relative to the screen and choose that without moving a cursor. While this system is far from perfect — I’ll take a touchscreen, thank you — it is much better than Lexus’ goofy joystick and touchpad systems.

A neat twist on this system is handwriting recognition. So, I can write out my destination character by character, and the RDX will translate my chicken scratch into typed letters. In theory, this system is great, but it has only about a 60 percent accuracy rate translating my third-grade-level handwriting. I found it more frustrating than helpful the 50th time in mistook my “7” for a “>.” You would think Acura would install an AI system to determine you are looking for an address or POI, so “>” should always be a “7” — unless the less-than sign is now a common part of an address…

My tester came with the top-of-the-line ELS 3D Premium Audio System with 16 speakers. While it sounds great at low to medium volume, its top end has a limiter preventing you from jamming out too loud. It probably also keeps the distortion to a minimum, so I guess that is OK. 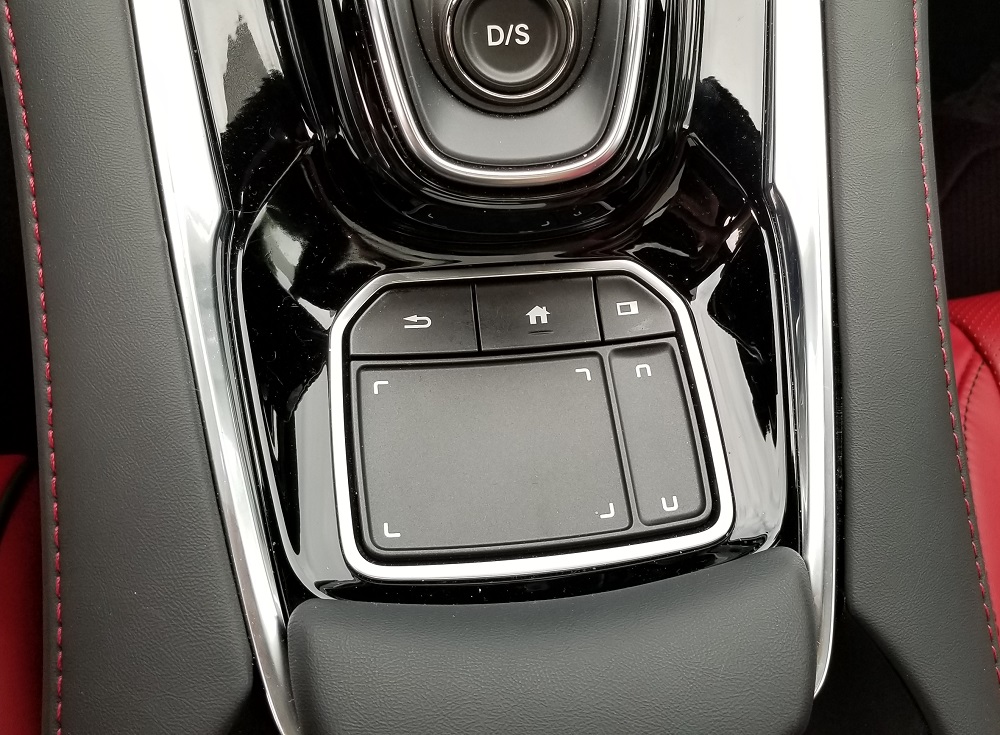 You can also hook up your phone via Bluetooth and stream your online music or files saved on your phone. This is great, but things get a little confusing when you get a phone call, as there is no traditional pick-up/hang-up button on the steering wheel. Instead, Acura Tinder-ized things by making you swipe left or right on the touchpad to accept or reject a call.

Rounding out the tech are the nannies that babysit you while driving. The 2019 RDX comes standard with the full AcuraWatch suite, which includes adaptive cruise, lane-keep assist, road-departure mitigation, forward collision warning, lane-departure warning, and automatic high-beam headlights. The A-Spec package fills this out by adding front and rear parking sensors, and blind-spot and rear cross-traffic monitoring.

Having these safety features is amazing, especially the adaptive cruise control, but the cruise is a little intrusive and overreacts like a tense passenger who actually has a stress brake pedal. Many times during my testing, the driver in front of me would turn off into an exit lane and slow down for the exit ramp, but the cruise would still try to stop the RDX in the middle of the road to avoid this now-phantom car. Sure, this is a small gripe for an otherwise useful system, it is still an issue. 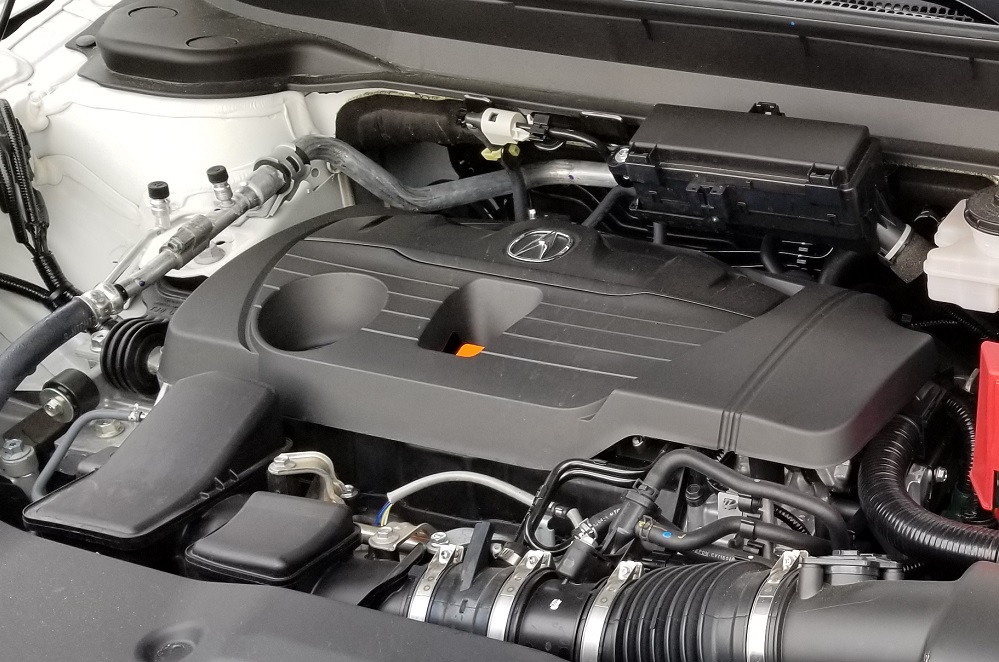 The 2019 Acura RDX comes with a Civic Type-R-sourced 2.0-liter turbocharged four-cylinder engine that delivers 272 horsepower and 280 pound-feet of torque. This heads to the front wheels as standard, but my tester had Acura’s slick Super Handling All-Wheel Drive that carefully adjusts torque to each wheel to help push you through corners. This power routes through a 10-speed automatic transmission that delivers precise shifts and has very little gear hunting at lower speeds.

This adds up to a surprisingly quick 0-to-60 time that my backside puts in the low-six-second range. And getting to that speed in a hurry delivers a satisfying note from the 2.0-liter engine. 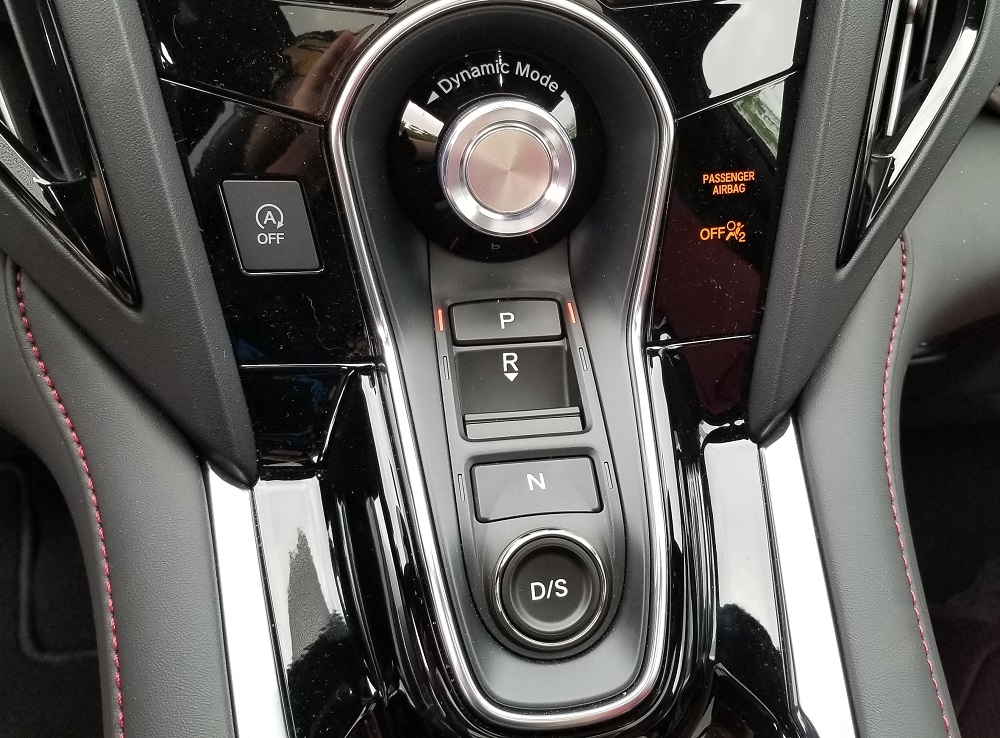 Fuel economy is not terrible at up to 22 mpg city, 28 highway, and 24 combined, but the A-Spec model with all-wheel drive cuts it to 21 mpg city, 26 highway, and 23 combined. To avoid sucking fuel during idle, Acura added an automatic engine-stop/start system. While this is a thoughtful addition, it is far and away one of the most intrusive systems I’ve experienced.

Most auto-stop/start systems will wait a few seconds before shutting the engine off, but the RDX’s system shuts off right after you come to a complete stop, creating a split-second delay if you move back to the accelerator too quickly. I suggest deactivating this via the switch on the center stack. The bad thing is you cannot permanently turn it off.

Handling is surprisingly good in the 2019 RDX as Acura has found a great balance between comfort and sport, and the selectable drive modes do the rest. 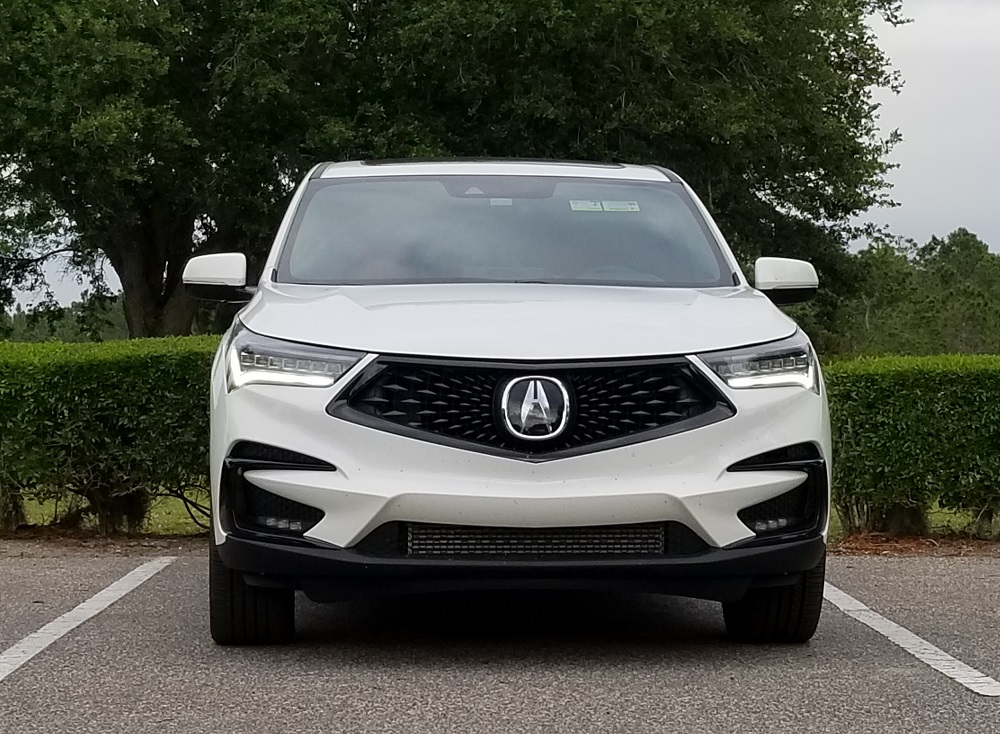 With a starting price of $37,400 and an array of premium standard features, the 2019 Acura RDX is a great value. My SH-AWD A-Spec tester rang in at $45,600, which is still an incredible value. What’s more, unlike the RX I tested a few weeks back, the RDX feels special and not like a warmed-over Honda. Sure, there are plenty of Honda bits under the skin, but Acura does a good job of burying them.

There are a few sore spots, though, including the overbearing adaptive cruise and the good-but-needs-improved infotainment touchpad. Overall, the 2019 Acura RDX A-Spec is a great luxury crossover. 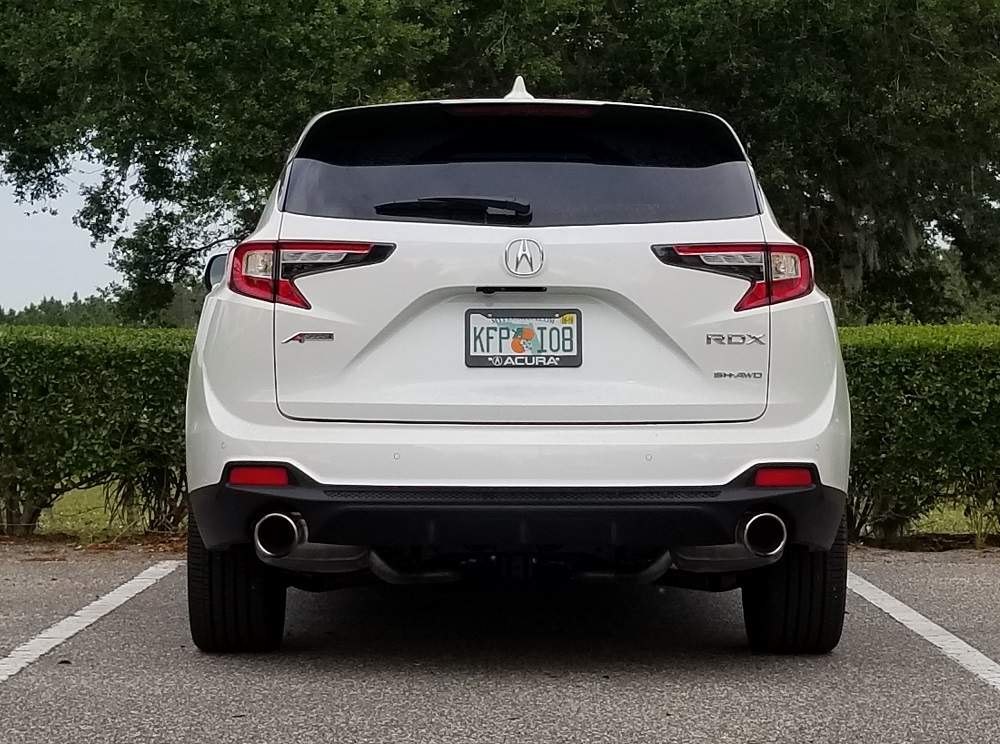 I’ve been waiting for my chance to put the 2019 RDX through its paces, and it delivered well beyond my expectations. At a $37,400 base price, I would pick it up in a heartbeat, and at just $45,600 as tested with loads of features, it is borderline irresistible. If I had the cash today, I couldn’t throw it at an Acura salesperson quick enough, but I would skip the White Diamond Pearl paint my tester has and go with Performance Red Pearl.