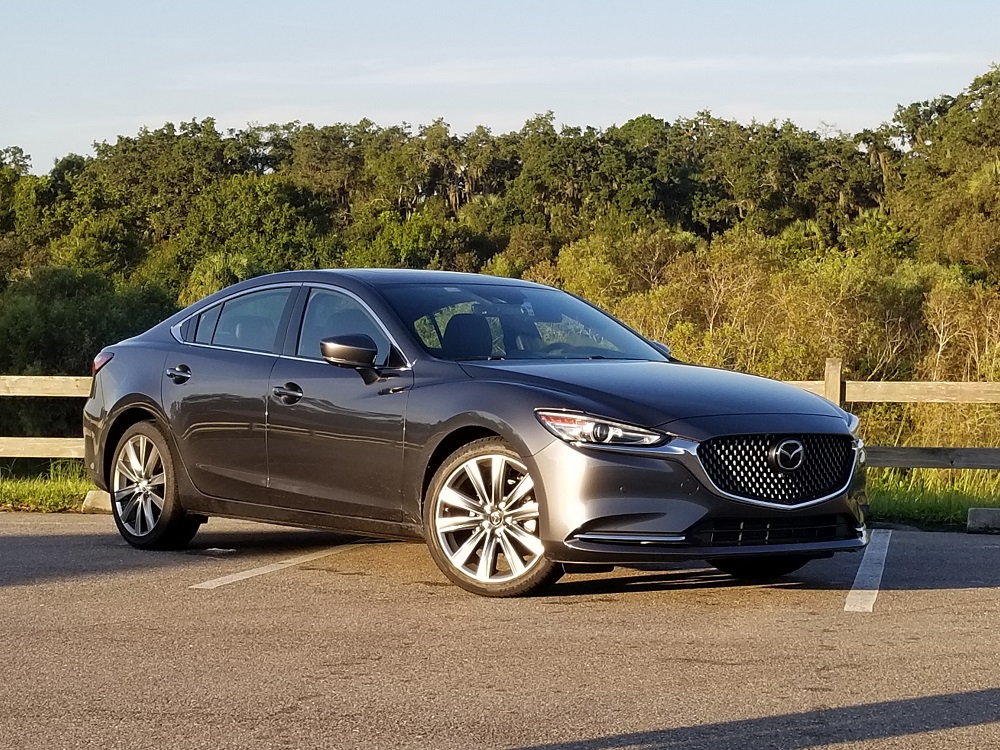 When Mazda released the new-generation CX-9 with its turbocharged engine, it proved right in my claim the brand would add forced induction to its SKYACTIV powertrains. But Mazda fans, myself included, wanted more of this engine, and Mazda delivered by making this 250-horsepower 2.5-liter turbocharged engine an option in the restyled 2018 Mazda6.

Is this pairing the rainbows and unicorns we all expected? I spent a week in the 2018 Mazda6 Signature to find out. 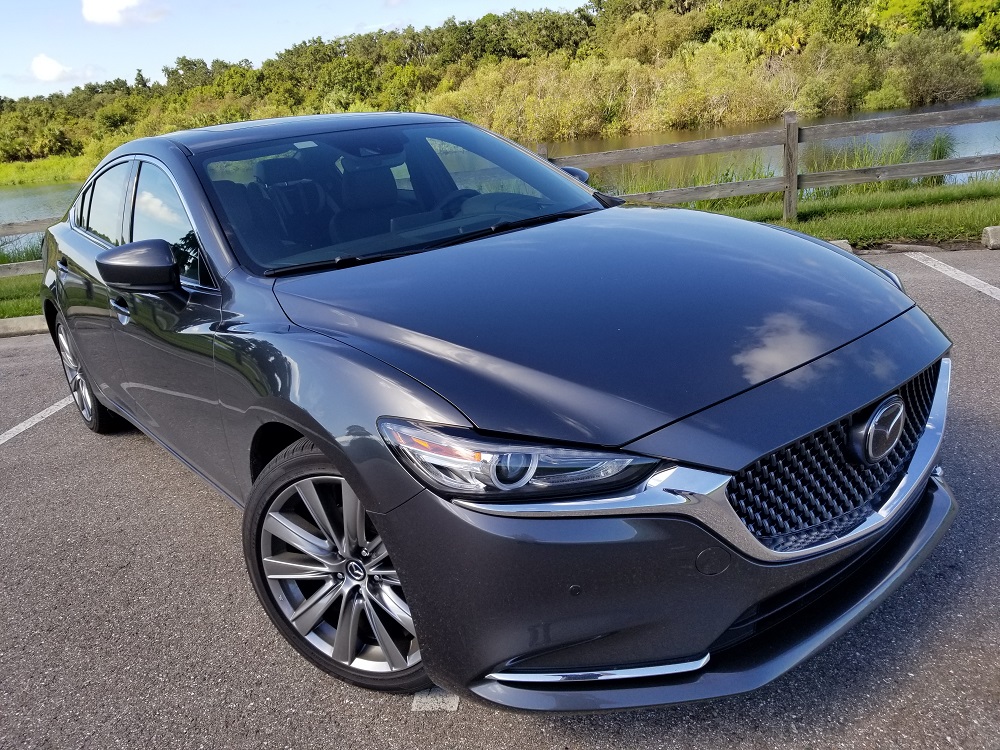 The 2018 Mazda6’s styling looks the same from a quick glance, but there are a few new bits here and there. The big change is to the grille, as Mazda made it wider and lower, and it added new designs like the gunmetal mesh one on the Signature trim. This larger grille also resulted in a revised front bumper with a smaller air inlet. Rounding out the front end changes is the dark-chrome grille underline that now swoops under the newly standard LED headlights.

While the front end is the main course for the Mazda6, the profile view is a fine dessert. It features the swooping wheel arches that have made the KODO design legendary in recent years. Toward the doors, things get a bit boring, but Mazda makes up for this with a body line above the rear wheel.

Around back, the 2018 Mazda6’s changes are equally subtle. It features a new dark-chrome applique that connects two revised taillight assemblies. There’s really not much excitement going on in the rear than the dual exhaust outlets that show off the Mazda6’s sportier side.

Inside, Mazda spent countless hours revising the cabin to make it more upscale and stylish. And it succeeded with minimal flaws. The instrument panel takes on a more horizontal orientation than before, which widens the front visually and gives you a little added room between your knees and the bottom of the dash. The air vents are smaller and better hidden than before to avoid breaking up the stylish dash, but their downsizing makes it a bit difficult to aim them correctly.

Mazda also simplified the heating and air conditioning controls, putting them all in one line instead of in a stacked format like the previous year. And the temperature controls now emit a sharp blue and red glow in the dark, which is a nice touch and makes them easier to find at night. Probably my favorite part inside the 2018 Mazda6 Signature is the UltraSuede NU accent shooting across the dash and down the door panels. The real wood trim I could live without because is feels thin and too plastic-like.

The seats are also all-new in 2018. They are just as comfortable as they were in previous years — that’s not necessarily a good thing — but the Signature model’s seats now feature ventilation to keep your backside cool and dry.

Overall, the Mazda6’s appearance is far more upscale than its price tag indicates, especially in the $35,000 Signature trim. If there is one thing I would change, though, it would be the interior color schemes. The darker theme like my tester had feels a little cave-like and could use a splash of color. 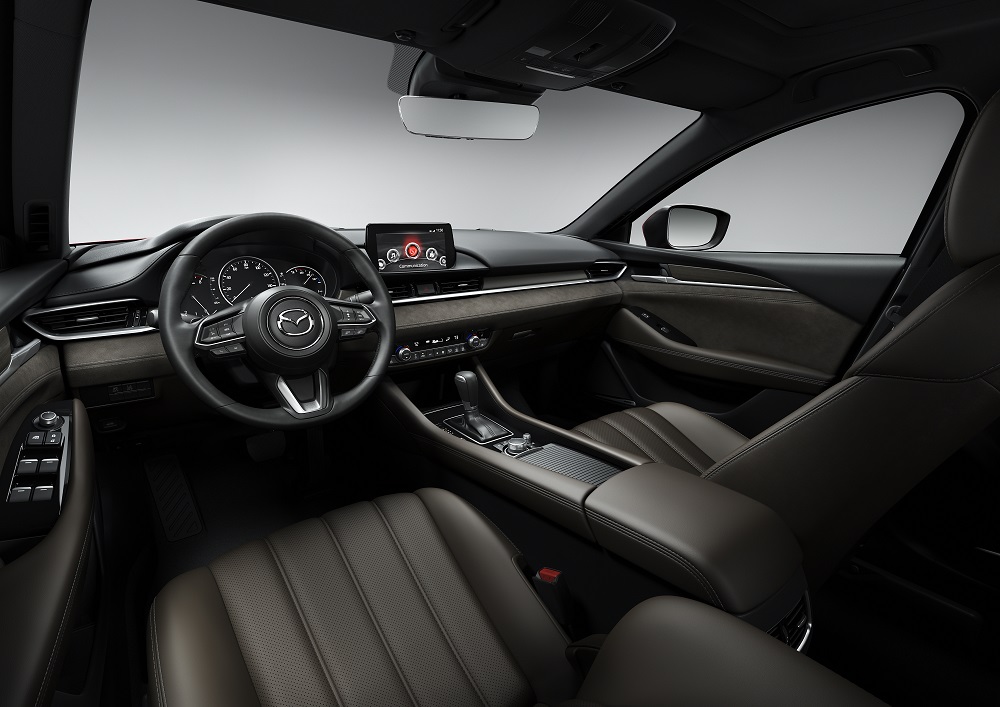 While Mazda retains the Zoom-Zoom personality it’s had for years, it doesn’t sacrifice comfort in its midsize sedan to get there. The Mazda6 surprisingly glides over most bumps with little fuss, keeping passengers and the driver comfortable. It also has a tremendous amount of noise-deadening materials to keep the outside noises where they are supposed to be.

As I mentioned earlier, the seats are reshaped in the 2018 Mazda6. The issue is that Mazda spent engineering dollars and time reshaping the seats, but they are no more or less comfortable than before. They feel like your normal, old midsize sedan seats, albeit wrapped in sweet Nappa Leather in the Signature model.

There is a ton of tech in the 2018 Mazda6 Signature, some of it great, some of it “meh,” and some of it terrible. The good includes the ventilated front seats to keep things cool, the customizable instrument panel, the clear head-up display, and the adaptive LED headlights with automatic high beams that illuminate nighttime driving.

On the “meh” side of things is its entire infotainment system. It features a touchscreen and rotary knob system — the touchscreen capability are limited when driving, but the rotary knob is not — which is a useful redundancy, but it has some flaws. Not only are the initial menu icons a bear to learn, but the tabs at the bottom of each feature make no sense until you’ve frustratingly absorbed what each one does.

Attached to this infotainment system is an equally “meh” audio system. When I read it’s a Bose Centerpoint system with 11 speakers, I expect great sound. Oh how Bose and Mazda disappoint me. While the bass is relatively punchy at high volumes, the treble fades quickly, leaving little more than distorted punch. I fiddled with all the settings, but still cannot find one I like.

Now the terrible. The Mazda navigation system has officially become one of the most unreliable ones I’ve ever used. A little backstory: I was testing a Miata a year or so ago, and in the middle of a long drive without my phone’s GPS, the factory GPS went all wonky on me, showing I was driving in the middle of the ocean. The GPS never returned to normal after that.

Now, in the Mazda6, I ran into the similar wandering issue multiple times. This time, at least the GPS returned to normal function after restarting the vehicle, but it is a sign there is something significantly wrong with this system that Mazda needs to address.

Without that massive flaw, the Mazda GPS system is actually pretty nice: it searches quickly, finds new routes quickly, and projects in the HUD. 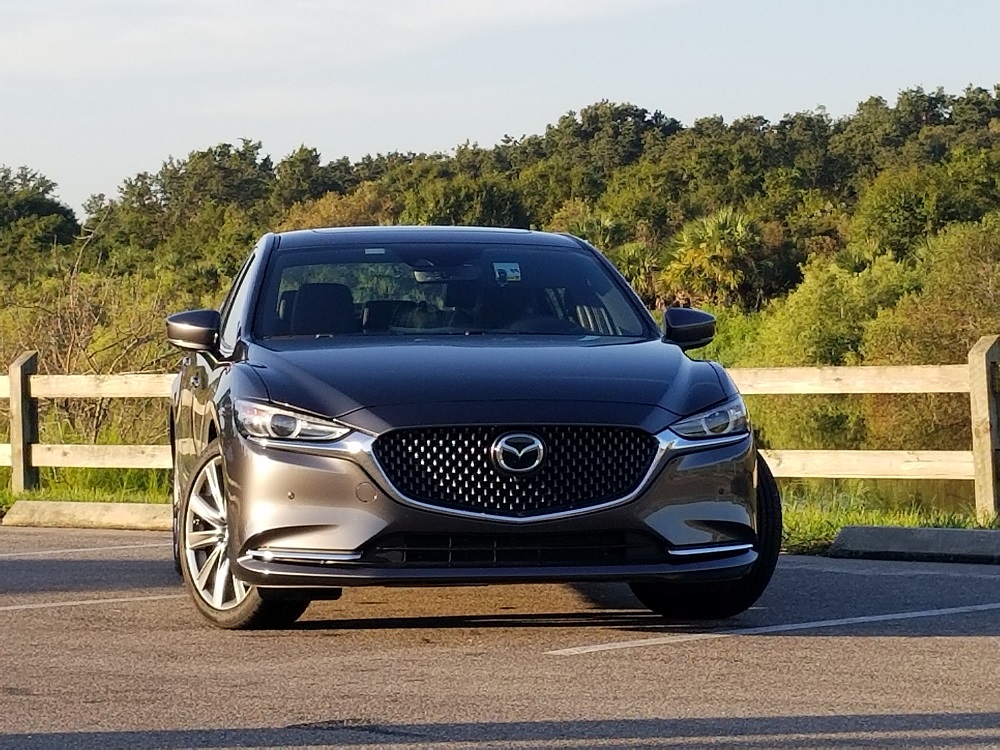 This was a huge deal for me as I have begged Mazda to spread the 2.5-liter turbocharged love to other models in its lineup. In 2018, the brand must have finally heard my screams as it added the CX-9’s potent four-cylinder to all Grand Touring and higher trims.

The one issue I see with this engine is from launch, it wants to spin the skinny front rubber if you go beyond half throttle. While it’s fun to hear the rubber scream under the 310 pound-feet of torque, it garners plenty of what-a-douchebag looks from others on the road. Plus, the torque comes on hard after a brief lag, which exacerbates the issue. Once it grips though, there is a hell of a lot of fun between 2,000 and 4,000 rpm, then this engine runs out of breath. I forgive it for the lack of top end as we are talking a family sedan, not an M3 beater.

Shifting comes from a slick six-speed unit that boasts a sport mode to help it hold shifts till higher in the rev band. With the top-end wheeziness of this engine, though, I recommend leaving that off. This engine tastes best medium rare.

I wish Mazda would pair this engine with a manual transmission, but with it being available only in the higher trims, I doubt we’ll see that in anything short of a resurrected Mazdaspeed 6. And, yeah, that’s not happening.

This powertrain combines for a 0-to-60 sprint of 6.4 seconds. That’s quick for a midsize sedan, but the Camry XSE V6, Accord Touring, and Malibu 2.0T Premier all offer significantly quicker launches at 5.8 seconds, 5.7 seconds, and 5.7 seconds, respectively.

Cornering is not terrible, but it is also not your typical Mazda Zoom-Zoom feeling. The Signature trim is the heaviest of the bunch at 3,560 pounds — 235 pounds more than the Sport trim — and you can feel that weight in the corners. That said, it is still better than most family sedans.

The standard 2.5-liter in the Mazda6 delivers good fuel economy at 29 mpg city and 35 highway, but the turbocharger eats into that, dropping the 6 to 23 mpg city and 31 highway. Plus, this engine requires a steady diet of premium fuel for max output.

Despite the fuel-economy drop, this is still on par with the upgraded engines in the Camry, Accord, and Malibu. 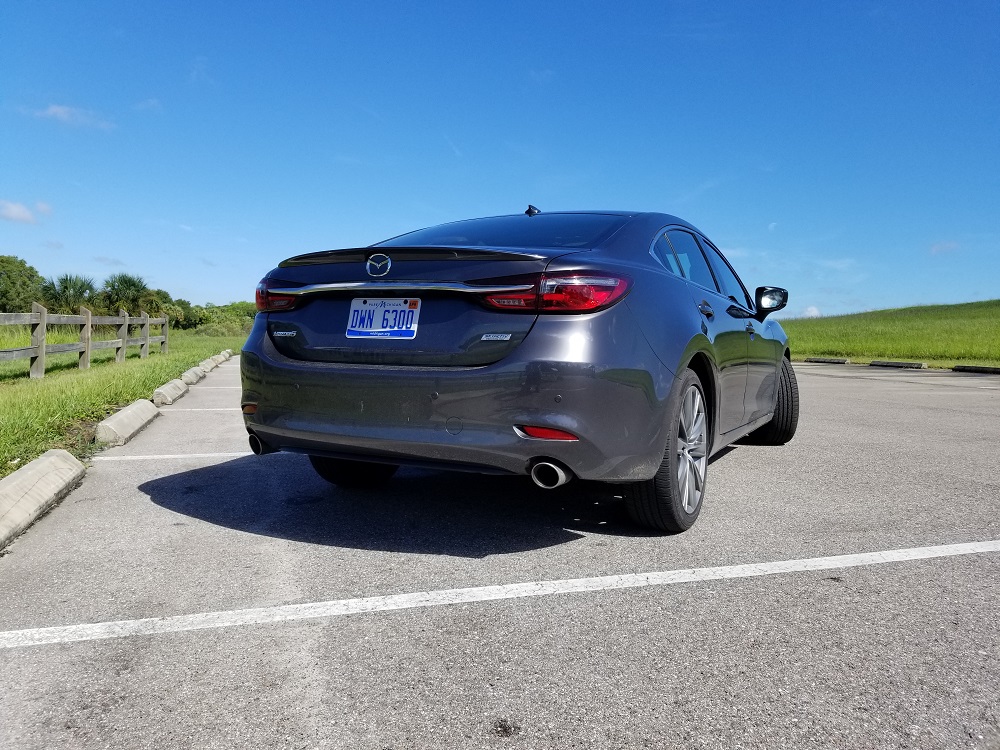 The Mazda6 has come a long way over the years in comfort, performance, and tech. It now rivals some of the best in its class. But the issue is that it is competing in a class that includes stalwarts like the Honda Accord, Toyota Camry, and Chevy Malibu. Where the Mazda6 falls short, these sedans excel, and where the 6 excels, its competitors match it.

I love Mazda, I really do. It’s far and away my favorite brand because it’s daring and willing to change the face of its loyal fan base. The 2018 Mazda6 Signature is a great sedan and a relative value at $34,750, but so are its competitors from Honda, Toyota, and Chevy. Because there are so many variables to consider between these sedans, I would have to drive them all over the course of a day to see which is the best for me. You should do the same.

Continue Reading
You may also like...
Related Topics:Mazda6, Review, Sedan