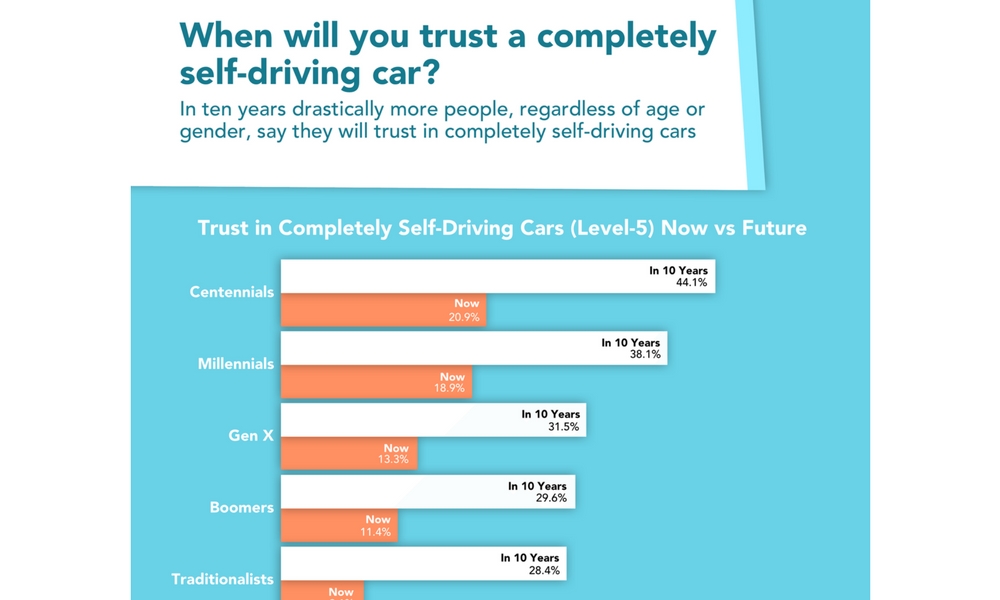 Thanks to research done by Autolist, we have insight into who’s eagerly awaiting Level 5 autonomous cars. In case you don’t remember, Level 5 is where vehicles act like Kit on Knight Rider, but hopefully not as cranky.

To nobody’s surprise, Autolist found young people are by far the most interested in a car that drives them. Traditionalists, the generation before the Boomers, pretty much think autonomous cars will trigger the downfall of society. Boomers and Gen X are about equally as skeptical of the tech. Meanwhile, about half of Millennial and Centennial men really want self-driving cars. For reasons I’m sure sociologists, psychologists, and automakers would like to explore, women from those two generations are far less trusting.

Thankfully, Autolist also found most drivers, even from the younger generations, don’t trust Level 5 cars now. Quite a few seem to have confidence in the tech we’ll have 10 years down the road. I have a funny feeling once everyone sees the tech in action, those numbers will rise.

By far the most interesting part of Autolist’s study broke down trust by what people drive, as well as their gender. Coming in first place were men who own Acuras, followed by women who have Audis. The top ten is all luxury brands, plus Honda and Cadillac. Considering these are vehicles more tech-savvy people tend to favor, these results aren’t surprising. I would expect Dodge owners to come last, since other surveys have found they’re the least likely to own a smartphone, etc.