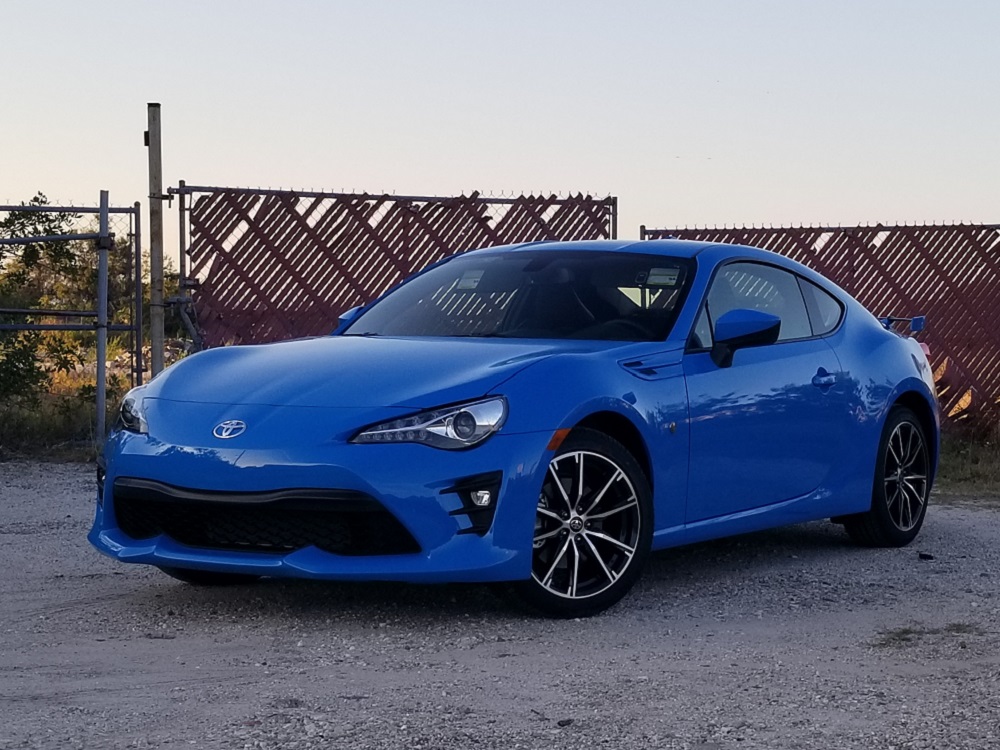 I am a sports car nut. Always have been and always will be. Sure, I enjoy horsepower too, but there is something about the delicate balance between power, weight, and agility that draws me to lightweight sports cars like the Toyota 86 and Mazda Miata. I recently spent a week satisfying my sports car needs in a 2019 Toyota 86 GT, and here’s what I think of it. 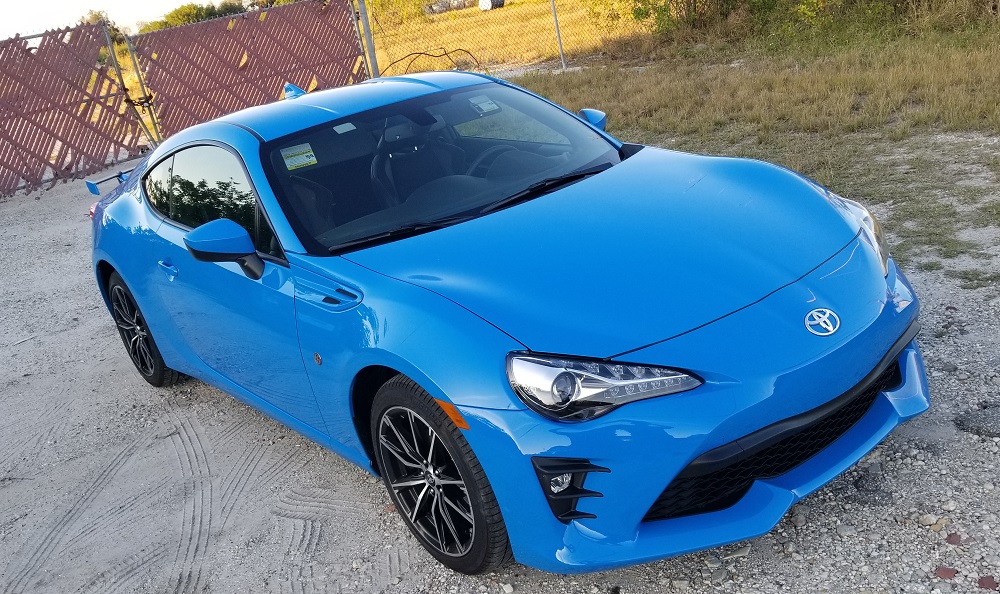 One of the Toyota 86’s biggest asset is its style. This classically styled sports car looks amazing from any angle and begs to be driven. I actually felt bad leaving it in the driveway for most of my weeklong test, but I made sure to take it out for a handful of satisfying sessions.

The 2019 Toyota 86 features that classic sports car look made popular by 1960s and 70s sports cars like the Toyota 2000GT and Mazda RX-7 that’s highlighted by a long, pointed nose that slices through the air and a short back end even further accents the length of that nose. Sadly, that scrunched-up hiney puts a big damper on trunk space and accessibility, but it’s all in the name of sexiness, so I’m good with it.

If there is a downside to the 2019 86’s styling, it’s the fake air vents in the front bumper and the fake ports on the front fenders. I understand these are supposed to enhance style and look damn good from a distance, but they kill the mood up close.

Inside, the classic good looks continue with a traditional three-spoke steering wheel and a simple dash layout with toggle-like buttons on the center stack. The GT trim I received — the midrange model — came with with partial-leather sport seats that looked amazing, were supportive, and delivered great grip in the corners. There was also Gandlux suede-like material all over the place, adding a subtle dose of sportiness throughout.

As a whole, the Toyota 86 is a well-put-together sports car with a delicate blend of classic sports car looks and modern features. 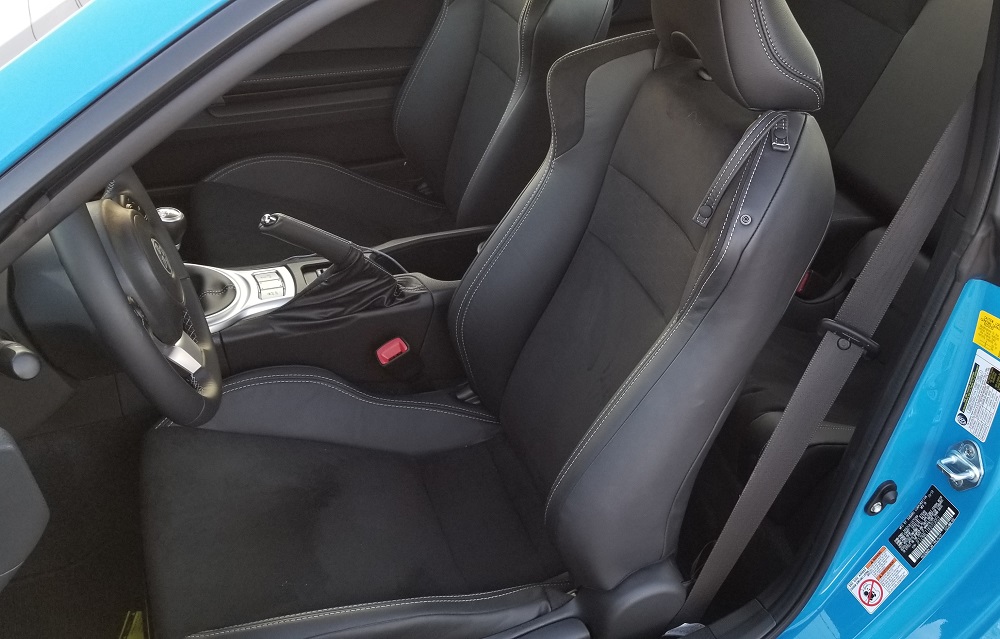 Hey, the 2019 Toyota 86 is a sports car. If you’re looking for the pinnacle of comfort, Toyota also has a very comfy Camry for sale. That said, the Toyota 86 is comfortable for a sports car, so long as you limit it to front-seat use only.

Up front, the 86 GT’s sport seats with partial leather and suede-like inserts are surprisingly comfortable on medium-length drives. They also hold you firmly in place in the corners without getting all grabby like your hug-happy aunt at a family reunion. This pairs with a well-weighted steering wheel wrapped in perfectly textured leather and a well-positioned gear shifter to give the driver a nice space to spend a few hours on a winding road.

While these front seats are comfy, there are a few issues. The biggest problem is the center armrest, or the lack of one. The center console it just a wide-open, forearm-swallowing valley that contains a sliding cup holder and a space to awkwardly lay a tiny smartphone on its side. Then there is the ignition button’s position almost directly in front of the gear shifter, forcing you to bend your wrist around the shifter to get the party started.

In the rear, things fall apart in a big way. Toyota claims there is 29.9 inches of rear-seat legroom, but my 8-year-old son begs to differ. Sure, he has longer legs than most kiddos his age, but even he has to bend up like a pretzel when there is someone in the seat in front of him. This is definitely better suited as a two seater with a little extra room in the rear for a few bags of groceries.

And you’ll need that extra grocery-hauling space as the 6.9-cubic-foot trunk isn’t hauling much. Add to that a high lift height and a very tight trunk opening, and you may just forget there is even a trunk back there.

Going all the way back to its days as the Scion FR-S, the Toyota 86 has always been a simple driver’s car with limited features and technology. Since moving to the Toyota lineup, the 86 has gained a little in this area, including available navigation and a few other smaller creature comforts, but it still lacks big-time in this area.

The 2019 Toyota 86 comes standard with a Pioneer 7-inch Display Audio system with eight speakers, Bluetooth audio streaming, Aha radio, and a USB 2.0 port. While this all sounds good on paper, the audio system is nothing to write home about, and its interface is utterly terrible and extremely old-school.

My tester came with the standalone $900 Premium Audio with Navigation option. While I appreciate the ability to plunk in my destination and get there without getting lost, this is one of the worst systems I’ve ever had the displeasure of touching — and I test tons of Lexus models and their terrible joystick-base infotainment systems for God’s sake.

Not only is this $900 navigation system ridiculously priced, but it is also clunky to use as it fumbles and stumbles while trying to predict your destination like some creepy dude trying to impress his date by finishing her sentences and getting it all wrong. It also has graphics that rivaled my first stick-to-the-windshield navigation unit from circa 2004, and the screen washes out the second the sun breaks the horizon in the morning. And I don’t mean it just gets harder to see; I mean it simply goes dark, leaving me stuck navigating via audio only. In such a driver-focused cockpit, I would expect a little more thought put into screen positioning to avoid this.

Another sore spot is Toyota abandoning its focus on safety in the 2019 86. In virtually every other Toyota model, the automaker has added the latest in advanced safety tech like lane-keep assist, lane-departure warning, automatic emergency braking, and more. The Toyota 86, however, has none of this.

The 2019 Toyota 86 boasts a 2.0-liter boxer-four engine heisted from Subaru but jointly tuned. This engine is horsepower upper-middle-class at 205 ponies but torque poor at just 156 pound-feet. This leads to a 0-to-60 clip just shy of seven seconds, putting it well behind its competitors.

The saving grace to the Toyota 86 is its slick six-speed manual transmission. This quick-throw gearbox is so tight it allows what I call wrist-shifts — I can simply flick my wrist to change gears — and all but the 2-to-3 shift are smooth. That 2-to-3 shift, though, can be tricky. I’ve rowed my owned gears for over 20 years, and I grinded gears or hit the rev limiter more times than not when slamming through the cogs. 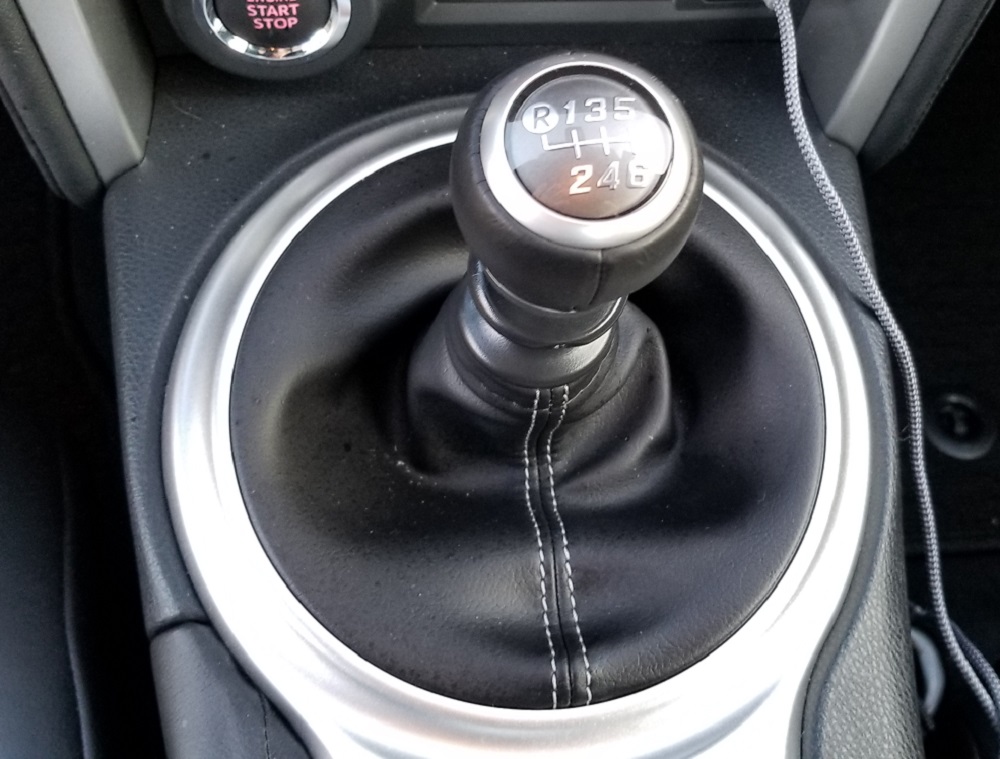 All other parts of the 2019 Toyota 86’s performance were great. The braking is firm and predictable, and the steering has the perfect weight and responds instantly to any input. There is also ample feedback through the chassis while managing to absorb large bumps without too much fuss.

Needless to say, the 2019 Toyota 86 is no straight-line racer. It’s happiest on a tight autocross track that is more about precision than speed. Stick it on a cone-lined retired military runway — AKA an SCCA solo course — and you’ll immediately fall in love. Or strap a turbo to it — like Toyota should have freaking done in the first place — and make it an all-around racer. 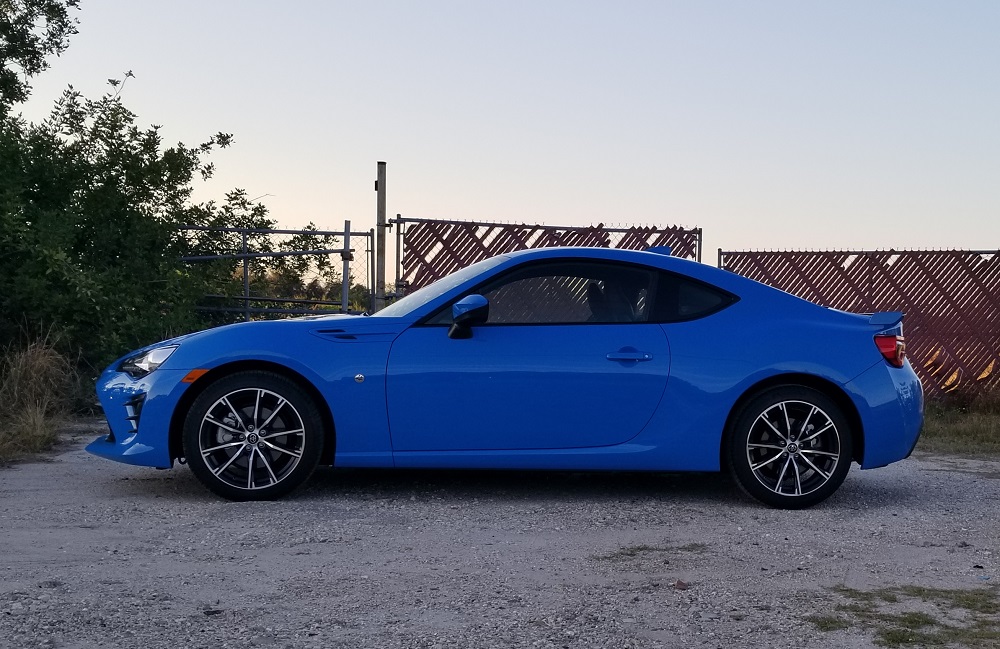 For a sports car, the Toyota 86 is quite the fuel sipper. The EPA rates it at 24 mpg city, 32 highway, and 27 combined. During my weeklong test, I observed average highway fuel economy in the 33 to 34 mpg range at around 75 mph. My combined fuel economy came in around 28 to 30 mpg, and I was not easy on the right foot. 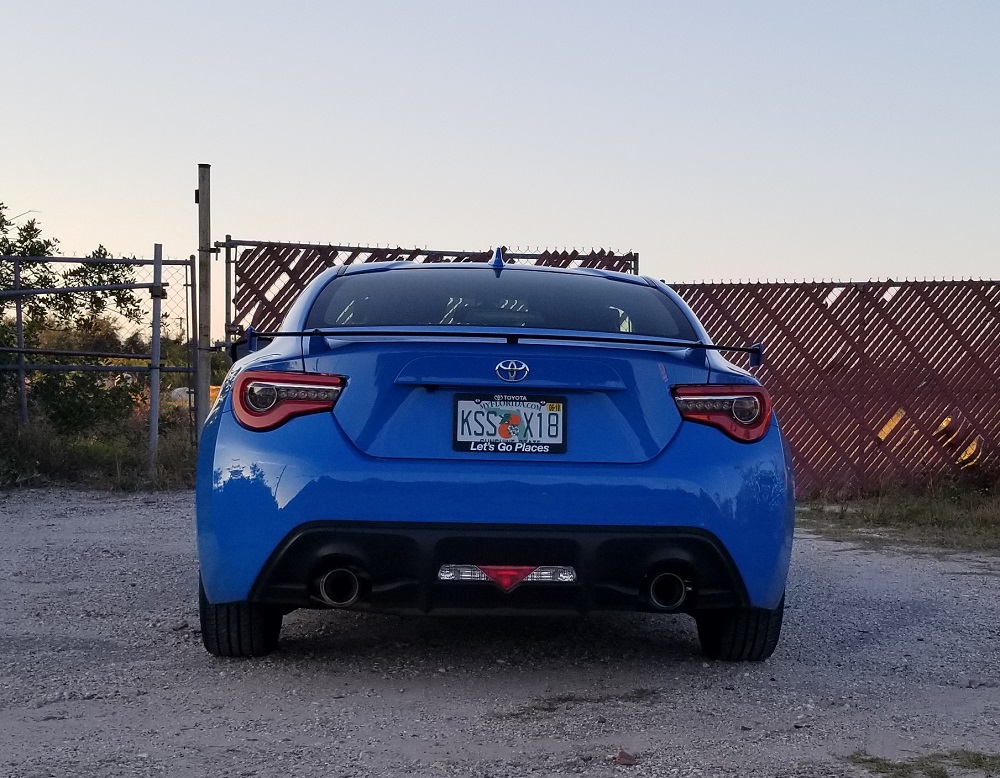 The 2019 Toyota 86 is a good value at $27,175, so long as you put performance over roominess and features, and the GT trim’s $29,305 base price is also strong for the extra features it adds. However, there are tons four-seat competitors with better straight-line speed that are cheaper like the 2019 Ford Mustang EcoBoost for $26,395 and the Chevy Camaro for $25,995. And if you can forgo those tiny rear seats, you can get the added benefit of better acceleration and a drop top in the re-tuned 2019 Mazda MX-5 Miata for just $25,730.

If I had this cash in my pocket, I wouldn’t hesitate to drive all these models and even the aging Nissan 370Z to see which suits me better. I have a sneaking suspicion the quicker boosted four-cylinder in the Camaro and Mustang will overcome the nimbleness of the 86.