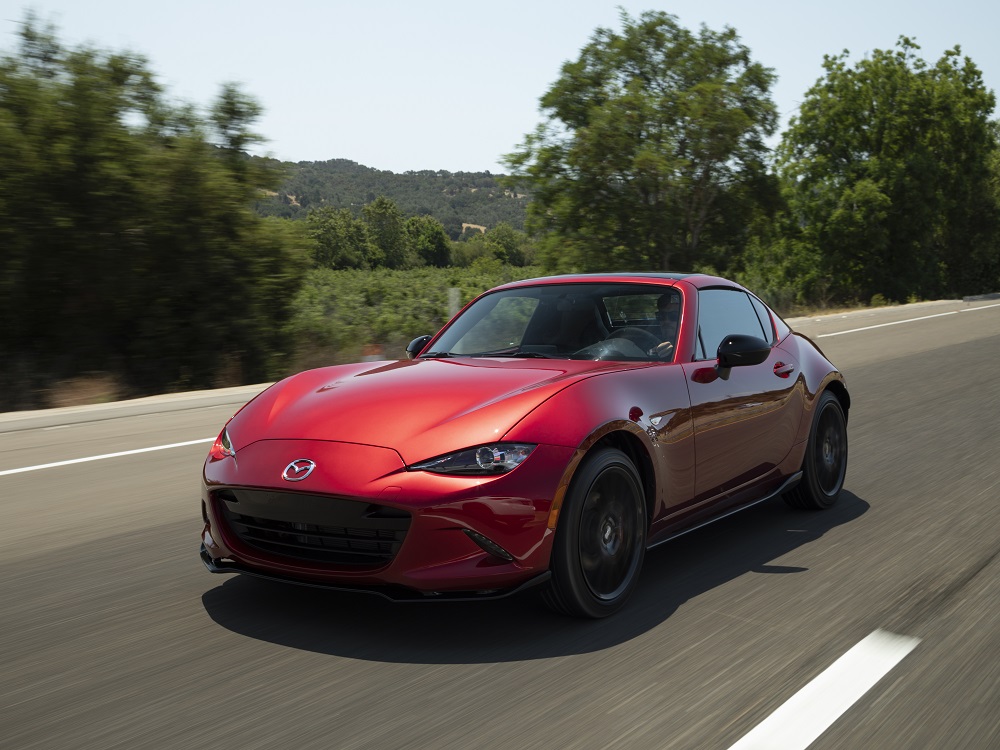 I don’t hide my inner Miata nerd. I wear it like a badge on my sleeve, and the retractable fastback model is just another wrinkle for me to love. From its incredible profile and rear-three-quarters angles to its more peaceful cabin, there is a lot that comes along with the extra heft of that roof.

The 2019 Mada MX-5 Miata RF went through a few updates, including an upgraded powertrain. Do these changes make it better than the previous model? I spent a week zipping through the streets of the Tampa area to find out. Here’s what I think. 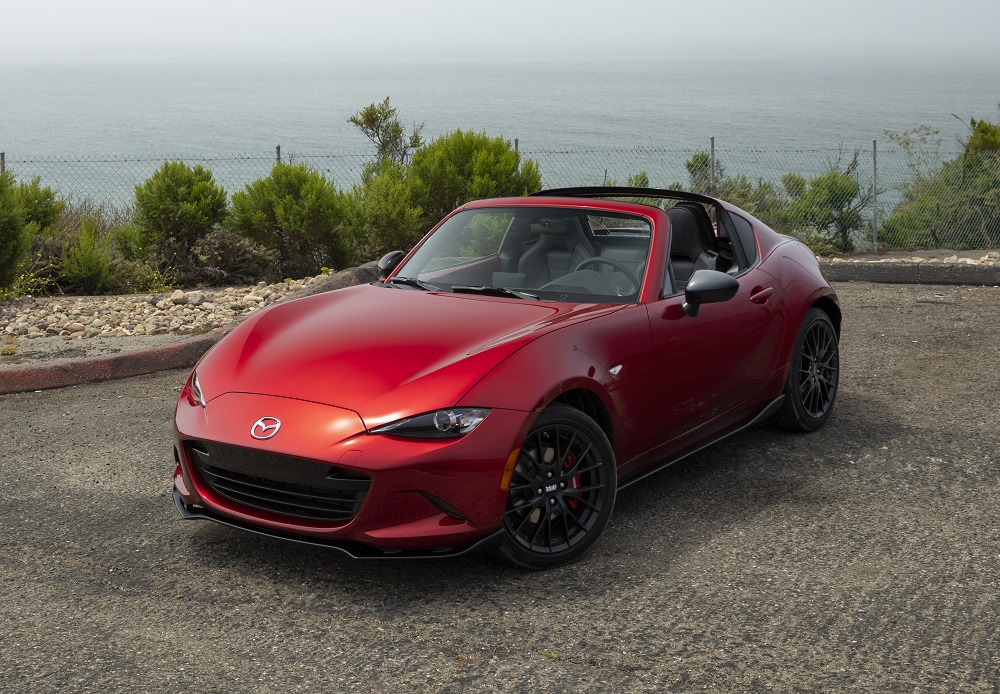 While some Miata fans hate the new retractable fastback look, most see it as a great alternative to the hard-top roof people put on previous generation models. Plus, this one does a 13-second electrohydraulic dance to go from coupe to targa top, which is a significant upgrade over the clunky, two-person removal process of previous-generations’ aftermarket fixed hard top.

Overall, not much has changed on the Miata RF since it debuted. It continues with a look that is just familiar enough to avoid alienating its fan base and unique enough to draw in buyers who aren’t necessarily fans of the roadster look. Its swooping roofline delivers a sharp coupe-like look that rivals the likes of the Toyota 86 and fits the aggressive styling of the new Miata like a glove. Plus, it still looks dang good with the roof fixed or retracted.

So, what’s new in the 2019 Mazda Miata RF? Just a set of metallic-black wheels and a standard tilt-and-telescoping steering wheel. Otherwise, it is virtually the same car as before. 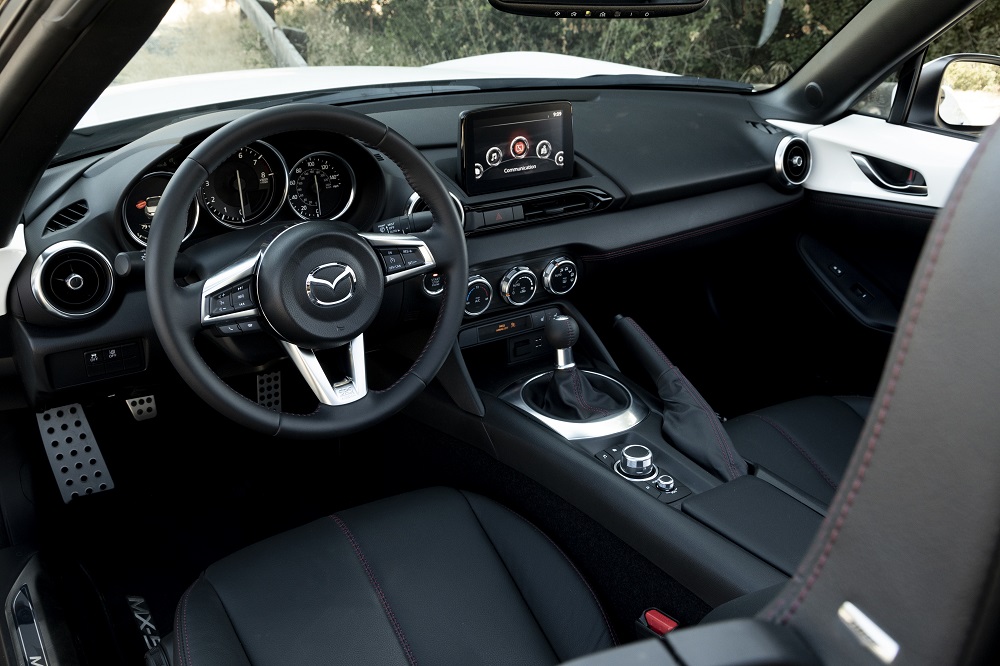 If you’re buying the 2019 Mazda Miata RF for comfort, then you’re barking up the wrong tree. Mazda engineered it to be a lightweight weekend warrior first and a daily commuter car second. The seats are thin, you can feel even the slightest imperfection in the road, the in-car noise level is higher than most buyers would appreciate, and its 52.2 inches of shoulder room is barely enough for an average adult.

All these downsides are what people like me — fans of lightweight performance cars — expect. We don’t expect to be coddled on our daily commute, but we do expect this car to handle the weekend beatdowns we give it in SCCA Solo Trials. And that is exactly what the Miata RF offers.

Now, it’s not that the Miata RF is undrivable. It’s far from that — especially in the range-topping Grand Touring trim Mazda brought me. The seats are wrapped in soft leather, the audio system is tuned to perfection, and the legroom is surprisingly ample at 43.1 inches. And with unlimited-headroom mode activated (the top retracted), the noise level is not as bad as one may expect.

Tech is one space where the entire Miata lineup — not just the RF model — has come the furthest. Today, the Miata has all the premium features and options most buyers want, while previous years sorely lacked in this area.

My tester was the Grand Touring trim, so it had even more goodies, including navigation, adaptive lighting, lane-departure warning, automatic emergency braking, traffic-sign recognition, and more.

Some of the highlights were the headrest-mounted speakers, as these also acted as your Bluetooth speakers when chatting on the phone. Because these speakers are just inches from your ears, you can hear clearly, even with the top retracted. Also, the blind-spot monitoring was a treat I never thought I would need in a 154.1-inch car. Because the retractable fastback roof has a massive B-pillar, there is a huge blind spot over bother shoulders, making the blind-spot monitor a much-appreciated confidence booster when changing lanes.

If there is one area for improvement, it’s the infotainment system. First, the positioning of the input knob is right in line with your arm while shifting. This means you will constantly hit it and switch between views. I know there is not much real estate to work with here, but Mazda needs to reposition this knob or just stick with touchscreen inputs only. Also, the infotainment system is extremely slow to load on initial startup, and finding an address is a cumbersome process that involves about three steps too many. 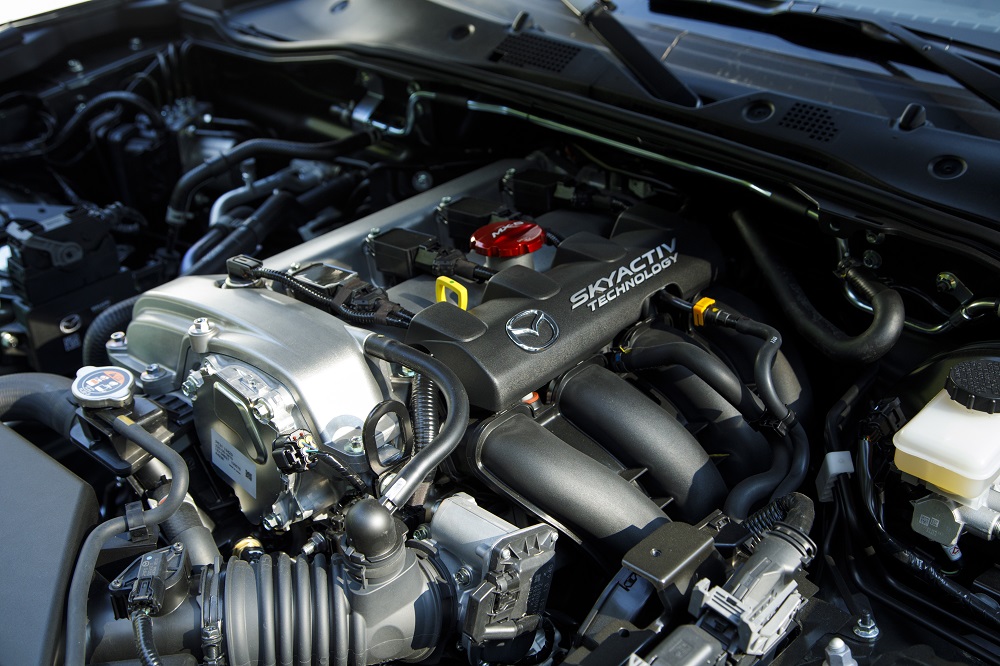 The big news for the 2019 Mazda Miata RF was a 26-horsepower and 3-pound-feet boost given to its standard 2.0-liter four-cylinder engine. This takes the 2019 Miata RF to 181 horsepower and 151 pound-feet of torque. This power heads through a standard six-speed manual transmission or an optional six-speed automatic and out to the rear wheels

I’ve never tested the automatic transmission, but the manual gearbox is what dreams are made of. The shifter glides into its gates with minimal direction from me, and the gear ratios are nothing short of perfection. This gearbox rivals some of the best in the industry.

While the extra power under the hood is great for bragging rights when someone calls your Miata a “chick’s car,” but it does little for actual performance. My butt-in-seat-o-meter noticed no big performance difference from the old 155-horsepower Miata to this one. I’m sure it runs a tick or two quicker to 60 mph with the extra power, but your derriere won’t notice the difference. Besides, with roughly a six-second 0-to-60 time, the Miata RF’s fun is never measured in straight-line quickness.

While you may not spot an acceleration difference with the new output, this engine is far less wheezy on the top end than the 155-horsepower version. With a redline pushed up by 700 to 7,500 rpm, there is a meatier powerband to play around with in the middle of the rev band, which makes downshifting into the corners and accelerating out of them a little more entertaining.

In the corners, the sport-tuned suspension is what any Miata fan expects it to be: perfection. This undercarriage does a great job keeping all 2,453 pounds of the Miata in check, and even the added topside heft of the retractable fastback is barely noticeable. Again, I am sure there is a noticeable difference in instrument testing, but the in-the-seat feel in the RF model is just as confident as the lighter soft-top model.

Fuel economy is not something many buyers will look to when shopping for a sports car, but this is one of the Miata RF’s specialties. The EPA rates it up to 26 mpg city, 34 highway, and 29 combined with the manual transmission. With the automatic transmission, the EPA says the highway and combined ratings shot up by 1 mpg each. In my testing on the flat roads of Florida, I hovered between 35 and 40 mpg without trying. 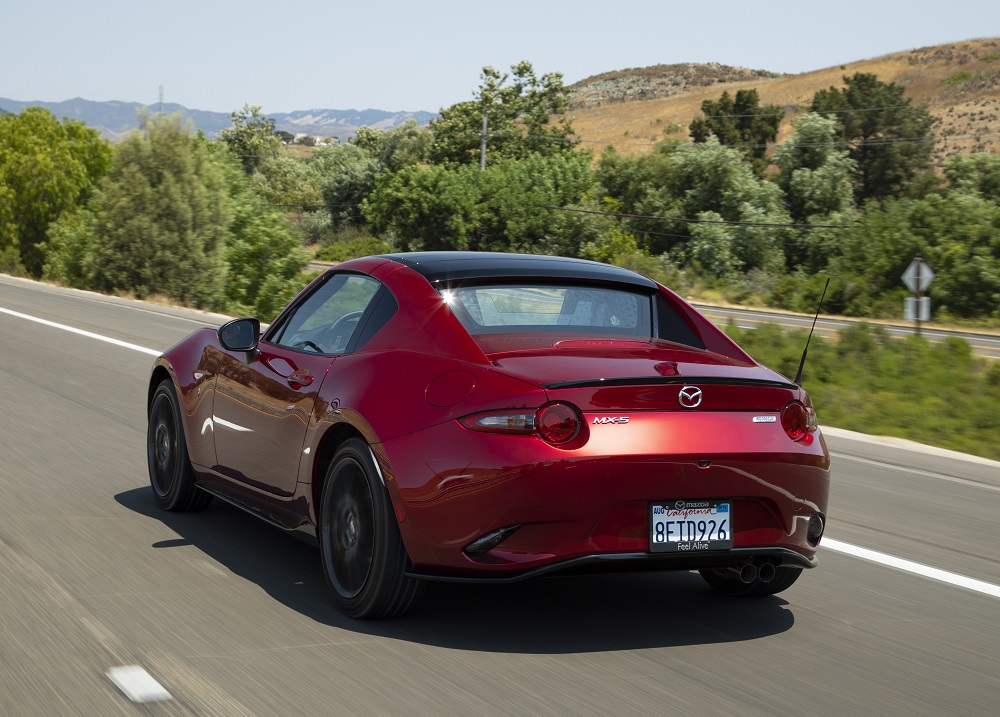 There is no denying the 2019 Mazda MX-5 Miata RF is the perfect balance of coupe and roadster for a buyer who may like the top down on occasion but doesn’t want to commit to a roadster. With the top up, it feels like a traditional two-seat sports car and lacks the wind noise of the roadster. Sure, there is a 114-pound penalty literally hanging over your head for choosing this model, but the average motorist will never notice the extra heft.

Now, the big issue is the 2019 MX-5 Miata RF is a pricey upgrade. All that metal and the tech that allows it to do its top-down dance adds $2,755 to the standard Miata Club price. Plus, there is no cheaper Sport trim option like in the soft-top model to reduce costs. Is it worth the extra cash? Yes, but only if that added payment is already in your budget. Otherwise, stick to the soft-top model.

While I love the looks of the Miata RF, I am good with a soft top and cannot fathom paying an extra $2,755 for a partially retractable hard top. I would rather take my cash and dump it on the soft-top model, and use the extra moolah to move into a higher trim or upgrade the engine a bit.

The only legit competition the MX-5 RF has other than its soft-top sibling is the Toyota 86. Fortunately, I recently had a weeklong test in this four-seat sports car too. While it has more power and an equally fun attitude, the MX-5 RF feels quicker, its engine is happier to hit the rev limiter, and the transmission has more positive engagement. Plus, the Miata RF has a wider array of features to pick from.