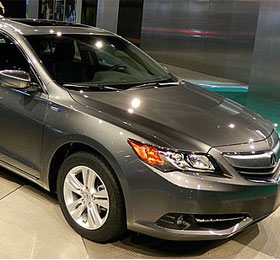 Automakers around the world are stepping up their game when it comes to fuel economy. As government standards in both the United States and Europe are increasing, companies are rising to the challenge. Governments are moving to make their citizens less dependent on foreign sources of fuel, plus reduce vehicle emissions and air pollution. All of this means that consumers will need to visit gas stations less often, thanks to technologies like turbocharging and hybrid powertrains.

Just because cars are becoming more fuel efficient does not mean that they cannot be luxurious at the same time. In fact, quite a few of the high-mileage cars for 2014 are luxury models, bringing a high level of comfort and technology along for the ride. This means you can save on fuel without suffering. In fact, you might actually be more comfortable in any of the ten following models.

Acura has built a solid reputation for vehicles that feature an excellent build quality. The ILX also comes with plenty of technological gizmos like a six-inch navigation/infotainment screen, as well as a system that reads incoming text messages out loud, helping the driver keep their eyes on the road. When it comes to fuel efficiency the ILX Hybrid definitely brings it with an estimated 39 mpg in the city and 38 mpg on the highway, meaning gas station stops will be made more often for drinks and snacks than fuel. True to Acura form, the powertrain is peppy and the suspension is tuned for tight road handling.