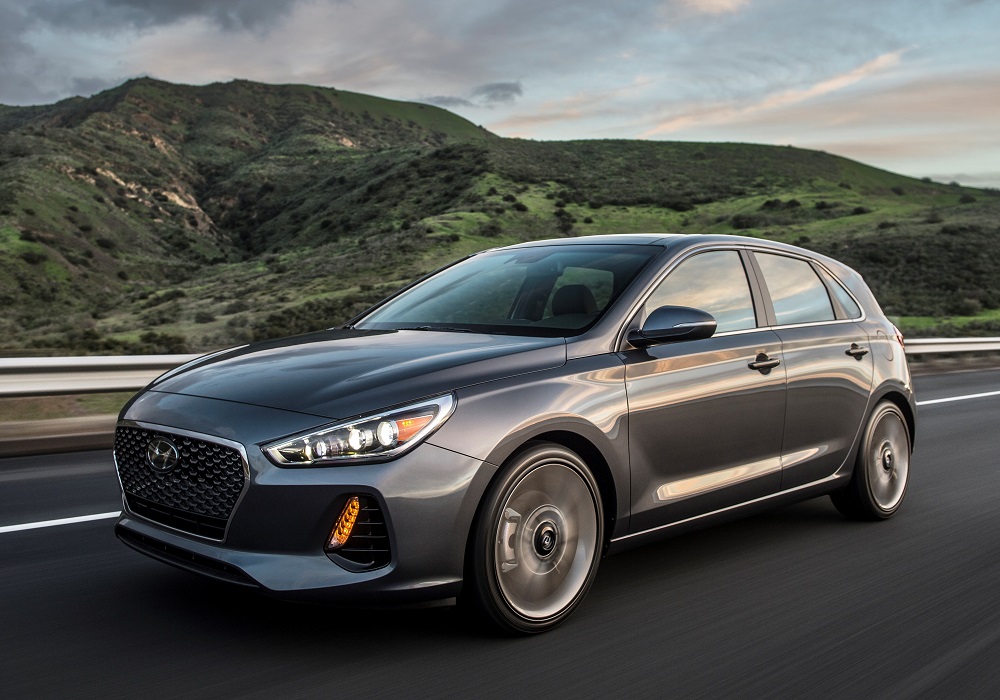 Compact cars were once all the rage, but they’ve cooled in the past decade or so with the arrival and success of the small crossover. I mean, why settle for a four-door compact when you can get a small crossover with more cargo room, better ride height, and available all-wheel drive for a similar price and with similar fuel economy?

Despite all this, the compact car segment continues on, but it’s seen many changes over the years that have brought in more features, some added seat room, and sharp looks that were never a part of this segment before.

To help wade through all the compact options out there, we’ve created a list of our 10 favorites. Continue reading to find out if your favorite compact made the list. As one of the best compact cars over the past few decades, it’s no surprise to see the Corolla atop our list of the best compact cars. Not only does it deliver outstanding fuel economy at 30 to 34 mpg combined, but it also comes with standard automatic emergency braking, has a roomy rear seat with 41.4 inches of legroom, unrivaled reliability, and lots of standard features and options.

However, it does fall short with its meh handling, drone-y continuously variable transmission, and lackluster cabin quality. Hearing the name “Kia” on any top-10 list may leave some traditionalists scratching their heads, but Kia’s recent push for quality and value has pushed it near the top of the pile as of late.

Some of the Forte’s highlights include its upscale feel for the price, relatively quiet ride, its up to 32 mpg combined rating, intuitive controls, decent rear seat room, tons of premium options at relatively low prices, and its available advanced safety features.

If there is one area the Forte falls flat, it’s handling, as it tends to have lots of body lean in the corners at almost all speeds. Toyota gets a two-fer here with the Prius and Prius Prime both occupying the No. 3 slot. On the Prius side, its great fuel economy at up to 56 mpg combined, useful hatchback-like cargo area, impressive standard safety equipment, and adult-friendly rear seats are all highlights. On the Prius Prime, add its more traditional appearance and 25-mile EV range to the mix.

On the downside, the Prius has limited rear visibility, a way-too-funky look, meh acceleration, and a scratch-ready gloss-white interior that drag it down a bit. The Prius Prime has all the same issues, plus it can only seat four people and has a distracting infotainment system. No compact car discussion is complete without the Mazda 3. It has tons going for it like its sharp looks, zoomy personality, incredible fuel economy, amazing transmission options, and plenty of features to make it feel more upscale.

On the downside, it is a bit noisy, its rear seats are a tad tight, its rearward visibility is iffy in the hatchback model, and its infotainment system isn’t very streamlined. Like the Prius, Ford gets a sort of two-for-one deal with the C-Max, as it comes in a base hybrid and a plug-in hybrid known as the C-Max Energi. These two share our No. 5 slot, as they are both relatively fun to drive for their class, deliver outstanding comfort, come in an easy-to-use tall-hatchback body style, and get amazing fuel economy. On top of all this, the Energi model has 20 miles of EV range.

On the flip side, the C-Max’s cargo area isn’t as roomy as its rivals, its controls are a bit finicky, and the battery in the Energi model eats up a bit of cargo room. Yes, the Kia Soul could technically live in either the crossover or the hatchback realm. For this exercise, we’ll call it a tall hatchback. Some of the Soul’s biggest benefits include its tall body giving it lots of room inside the cabin, as well as its array of available premium features, its perfect driving position, its well-thought-out controls, and its new turbocharged powertrain.

The Soul is a polarizing vehicle and has its share of lowlights. These include its funky looks, limited trunk space with the rear seats upright, lack of available all-wheel drive, lack of advanced safety options in lower trim levels. Hang on a sec… didn’t the Corolla already make this list? Yes, but this version of the Corolla shares little more than a name with the earlier-mentioned sedan. The Corolla iM is actually a rebadged Scion iM, which was a rebadged Toyota Auris from Europe.

Some of this highlights of this hatchback include its above-average fuel economy, great handling, roomy hatchback body, and a wide range of standard equipment. On the other side of the equation, the Corolla iM also leaves a bit to be desired in some areas. These areas include its slow acceleration, numb continuously variable transmission, and very limited range of options. The latter is a carryover from its days as a Scion, so this could change at some point. Like its sister company, Kia, Hyundai is no longer the cheapo transportation it once was. Sure, it is still friendlier on the wallet than most others, but its quality is up there with the best of them. The Elantra is one of the keys to Hyundai’s success, and it comes in at No. 8 on our list thanks to its roomy cabin, easy-to-use controls, good fuel economy, and value.

It’s not without its downsides though. It’s engine is a touch noisy, its ride is a little bouncy and stiff, and its cloth front seats are just not that supportive. Back-to-back Hyundais at No. 8 and 9. This time around, it’s Hyundai’s first-ever dedicated green car, the Ioniq. Being relatively new, there are still some bugs to work out of this thrifty hatchback, but some of its best features are its up to 58 mpg combined in the Ioniq Blue, its useful hatchback, simple controls, and all-electric option.

Like I said, there are still some bugs to work out. These include its not-so-hot braking, odd delay off the line, and sloppy handling. Additionally, the Ioniq electric, though brand new, is far behind the leaders in the EV real at just 124 miles of electric range. Rounding out our list is a compact car many would expect to be higher on the list: the Honda Civic. This icon in the segment has fallen off a bit over the years, and its 10th-generation redesign hasn’t done much to rejuvenate it, save for the wild Type R and Si models.

Some of the highlights on the new Civic are its refined looks, great fuel economy, balanced ride, strong turbocharged engines, and available Honda Sensing on most trims.

Some of its worst parts include its funky touchscreen on higher trims, loud engine, and low ride that allows it to scrape too often.