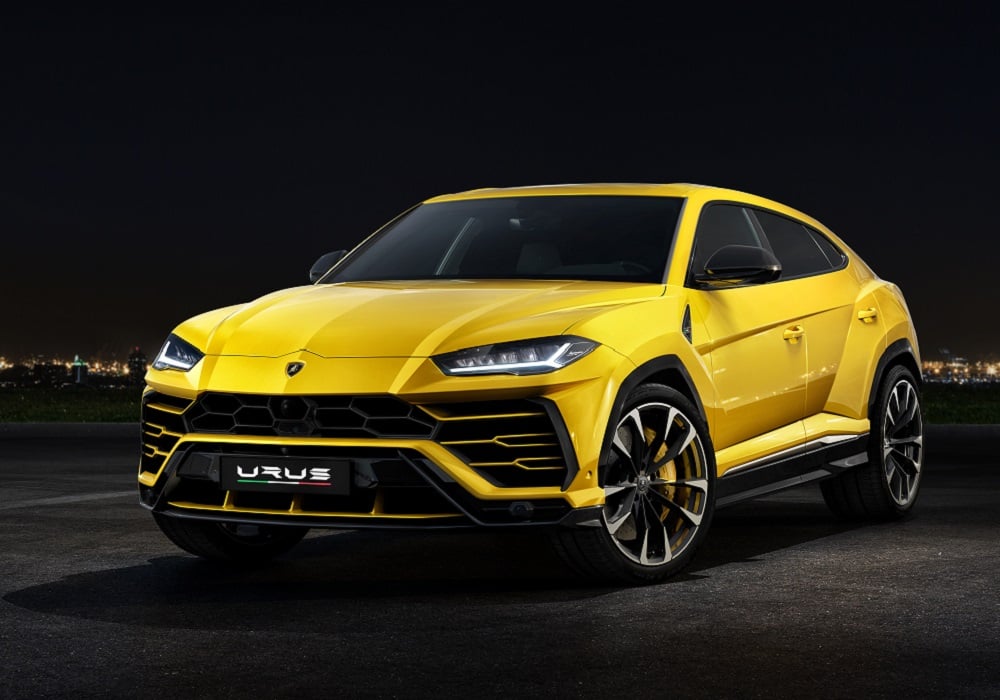 The 2019 model year will be a busy one for the auto industry. Quite a few all-new vehicles are about to storm on the scene, some with a ton of anticipation built up around them. Even more redesigned models are coming out, set to tempt shoppers as car sales slide. Instead of just looking like a warmed-over update of the previous Vantage, the 2019 model marks the launch of an exciting new generation. Even at just a glance, you can tell it’s an Aston Martin, yet the car looks decidedly modern in every way.

The cabin is exceptionally luxurious, with plenty of fine materials and top-shelf craftsmanship. It also houses quite a few modern technologies. Under the skin, the Vantage has an aluminum chassis inspired by the aerospace industry, making it both lightweight and strong. Breathing forth 503 horsepower and 505 lb.-ft. of torque is a twin-turbo 4.0-liter V-8 sourced from Mercedes-AMG. Finally, Cadillac is getting into the small luxury SUV space. To make the XT4 attractive to younger shoppers, Cadillac used a design team made up solely of Millennials. The result is something that looks modern, sporty, and puts a twist on Cadillac’s new design language, instead of just being a smaller XT5.

You get a punchy turbocharged 2.0-liter engine that won’t knock your socks off, but it will get this SUV moving. Three different models will be offered, with the base starting with an MSRP of about $37,000. Among the available goodies is white ambient lighting, a wireless charging pad, and near field communication. Steeped in controversy, the first Lamborghini SUV to debut in some time steps into one of the hottest areas of the market. You either love or hate the mixture of crazy angular features – a hallmark of Lamborghini for some time – mixed with a soccer mom side profile. Regardless, this thing will print money for the Italians, so it’s not going anywhere.

Lamborghini is calling this a “Super Sport Utility Vehicle.” Once you realize it uses a twin-turbo 4.0-liter V-8, you can begin to see why. It hits hard with 641 horsepower and 627 lb.-ft. of torque. But, the fact it’s the first time Lambo has used a turbo engine just further riles purists. Many questions surround the first pickup Jeep has made in a few decades, including what it will be called. The prevailing wisdom is that this will be the Jeep Scrambler, but nobody knows for sure.

Recent spy photos have shown that the pickup looks like the new Jeep JL from the front all the way to the rear doors. After that, it wears about a five-foot bed. Of course, what we’re seeing aren’t likely production-spec vehicles, so anything could change before the final reveal. We’re assuming most of the mechanicals carry over from the JL. Unless this thing looks like the Homer, it should sell like hotcakes. Coming in the first quarter of 2019 is the all-new Ford Ranger. It will jump into a red-hot midsize pickup truck market, where Nissan, Toyota, and GM are raking in the cash. Just remember this will be much bigger than the old Ranger.

While the new Ranger will look decidedly modern, it will also have plenty of innovative engineering under that well-sculpted skin. A 2.3-liter EcoBoost engine, paired with a 10-speed automatic transmission, will power the truck. According to Ford, torque will match what you get with a V-6, but you can get the Chevy Colorado and GMC Canyon with a diesel. An electronic-locking rear differential comes on FX2 and FX4 models, but can be added to others, proving Ford isn’t going to make the new Ranger a creampuff. Yes, Lexus is coming out with yet another crossover. Say what you want about the brand, it knows what people want and it’s willing to deliver just that. The UX does wear the dreaded spindle grille up front and lots of sharp angles from bumper to bumper, but it will still sell in droves.

The UX shares a platform with the Toyota C-HR, but that’s pretty much where the parallels stop. This is already being marketed as an upscale urban utility machine, so don’t expect to take one on dirt roads. The UX 200 will use a 2.0-liter four-cylinder engine with 168 horsepower on tap. The UX 250h uses the same engine in a hybrid configuration, with a peak 176 horsepower. Like the new Navigator, the Aviator strikes out in a new design direction for Lincoln. From front to back, it conjures up images of airplanes of old, making this full-size SUV a standout in a crowded market. Thankfully, that theme continues into the cabin, where the gauges look somewhat like old airplane controls.

The Aviator will have a traditional powertrain and a hybrid option when it launches in 2019. Both promise to be powerful and will use a twin-turbo system. Among the cutting-edge tech included on the SUV will be the Suspension Preview Technology, which anticipates road changes and adjusts damping accordingly. Reverse Brake Assist will also be available. Lincoln will also plunge into the luxury midsize SUV market with a new entrant, the Nautilus. This vehicle promises to provide traction the brand has been seeking for years, despite the Matthew McConaughey commercials.

Really, the Nautilus is the MKX, but with some changes, namely a new turbo 2.0-liter four-cylinder engine. The turbocharged 2.7-liter four-cylinder is sticking around. Both engines work with an 8-speed automatic transmission. Among the new technologies is a lane-centering system, evasive steer assist, wireless charging pad, and a 12.3-inch infotainment touchscreen. You’ll be able to get a Black Label version of the SUV, which changes the design of the vehicle inside and out, plus gives you exclusive perks. Since the 1970s, the Mercedes G-Class has stayed pretty much the same, which is absolutely amazing. That all changes for the 2019 model, which launches the second generation of this luxury off-roader.

You’re forgiven if you must do a double take just to see what changed. People were expecting and fearing a rounded, swoopy design for the SUV. Instead, Mercedes kept the characteristic boxy look. It also retained the go-anywhere capability, if owners dare get the vehicle dirty. Three locking differentials, a solid rear axle, excellent front suspension articulation, and an off-road driving mode are just some of the rugged features. The only engine is a twin-turbo 4.0-liter V-8 that produces a peak 416 horsepower and 450 lb.-ft. of torque. A sign of the times, Jaguar is launching its first fully-electric crossover, called the I-Pace. The exterior and even the cabin looks much like the concept, which debuted back in 2016. Everything about the I-Pace communicates sophisticated sportiness, something that has largely been missing in the EV market.

A 90-kWh battery pack allows the crossover to go up to 240 miles on a single charge, which is respectable. Jaguar really took advantage of the electric powertrain layout, pushing the wheelbase to almost 118 inches, when the crossover is just over 184 inches long. Behind the backseat is 25 cubic feet of cargo space, which expands to 51 cubic feet if you fold the seats down. Germans sure love their “four-door coupes” and apparently so do shoppers around the world. The X4 is such a vehicle, and we’re getting a second generation for 2019. Among the changes is a new chassis that uses wider front and rear tracks, a lower center of gravity, new suspension settings, better aero, and more occupant space.

The crossover is about thee inches longer and 1.4 inches wider. Even more impressive is the 50:50 front-to-rear weight distribution, which is a huge boost for handling. The X4 xDrive30i uses a turbo four-cylinder that throttles out 248 horsepower and 258 lb.-ft. of torque. Then there’s the x4 M40i with a twin-turbo six-cylinder with 355 horsepower and 365 lb.-ft. of torque on tap. GM’s twin full-size pickup trucks are getting the workover for a new generation. They’re bigger than before, because that’s the trend in the truck market, but thanks to innovative materials and manufacturing practices, they weigh less. Contrary to popular belief, GM didn’t turn to aluminum body panels to achieve all this, so all that criticism levied at Ford wasn’t hypocrisy after all.

Another big change is the carbon fiber bed liner, an option that boosts durability without adding much weight. Both trucks are gaining a 3.0-liter turbodiesel engine, which is another trend in the industry. Overall, the interiors of both model lineups are getting even more luxurious, leaving behind the Spartan and simply utilitarian cabs of trucks from long ago. This new iteration of the Continental GT pushes the technology envelope, but without Bentley abandoning its dedication to impeccable craftsmanship. After all, abandoning that ideal would pretty much wreck the brand’s reputation.

You’ll note the new generation has the same overall look as the previous two, but with a smooth, modern touch. Thanks to aluminum body panels, this big boy has shed 176 pounds. Of course, the 6.0-liter W-12 still adds plenty of weight, but it also hits hard with 626 horsepower and 664 lb.-ft. of torque. The completely new 8-speed dual clutch transmission works with the all-wheel-drive system. As they say, the proof is in the pudding, which is a 0-60 time of 3.6 seconds and a top speed of 207 mph. In case you haven’t heard, Hyundai is hurting since it hasn’t been selling enough SUVs lately. The all-new Santa Fe might help. The fourth generation brings a sportier and bolder look, which it needs to stand out in its extremely crowded market segment. You should note the new Santa Fe is what is now called the Santa Fe Sport, because it only has two rows. The three-row version will be called the Santa Fe XL in 2019.

Among the big changes is an optional diesel engine. The vehicle has grown a little in length and width. A higher-end interior, optional Krell sound system, and a system that prevents you from opening the door into the pathway of an approaching car are also new. With the midsize sedan market shrinking, automakers are pulling out the stops to net sales. The Nissan Altima is getting a bolder look that will make you rethink your preconceptions about it. Super advanced technologies and new powertrains also reshape the Altima. This is the SUV that signaled a big shift for Porsche, and it’s still quite relevant today. The redesigned third generation still serves up a surprisingly engaging driving experience, plenty of room for five occupants, cutting-edge tech, and loads of luxury.

Overall, styling is like the second-gen, but the SUV rides on a new MLB platform. It’s longer and lower than the 2018 models, plus it weighs about 120 pounds less. The infotainment screen measures 12.3 inches. Thankfully the old V-6 engine is out, replaced by a new turbo 3.0-liter V-6 that throttles out a mighty 340 horsepower and 332 lb.-ft. of torque. The Cayenne S uses a twin-turbo 2.9-liter V-6, which pushes out 440 horsepower and 402 lb.-ft. of torque. Not to be left behind in the full-size truck race, Ram is redesigning the 1500 for 2019. It weights less, is stronger than before, features greater capabilities, and boasts even more luxuries. Again, this lines up with market trends of people using pickups as people movers first and things of utility second.

This truck stands out from the competition with a more upscale interior, a coil-spring suspension, and arguably the best infotainment system. If you were hoping the new Blazer would be like the old one, think again. What we have for the 2019 return of the legend is a sleek, unibody urban cruiser. It won’t be hitting any hardcore trails or reigniting the rivalry with the Ford Bronco, but it will haul the kids and their soccer balls to practice quite well.

Chevrolet will offer the new Blazer with standard front-wheel drive, with all-wheel drive optional. This midsize crossover will seat five and feature the latest Chevy MyLink system for infotainment with an 8-inch touchscreen. The new Chevrolet Blazer will hit showrooms in early 2019.