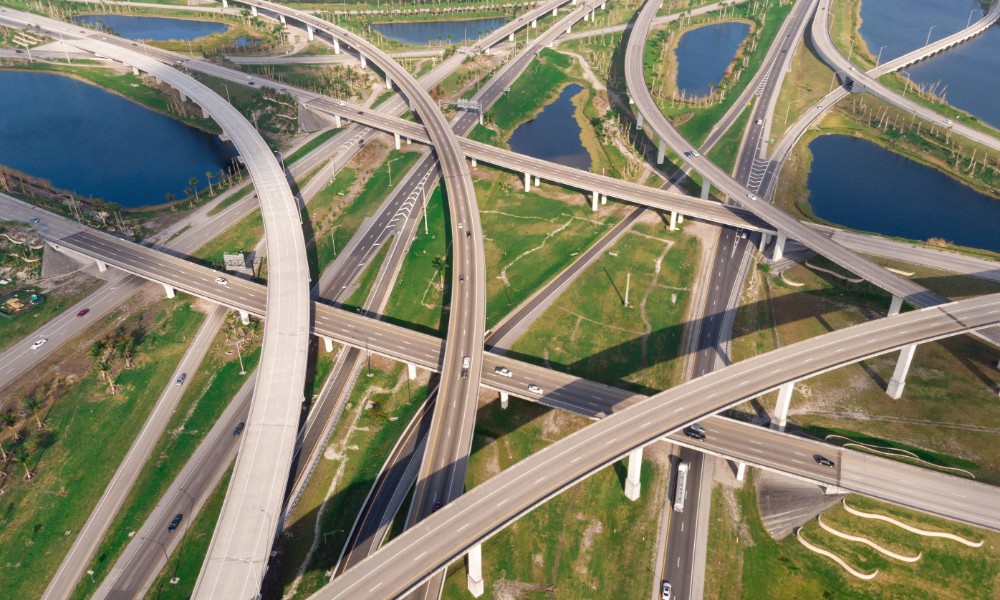 You might drive on the interstate to quickly get from one part of a metropolitan area to another, or when road tripping through multiple states, but how much do you really know about the famous system of highways?

From its inception to modern times, there are plenty of interesting facts about the U.S. Interstate System, but most people only have a vague knowledge of them, if even that. How many of the following U.S. Interstate facts do you already know? 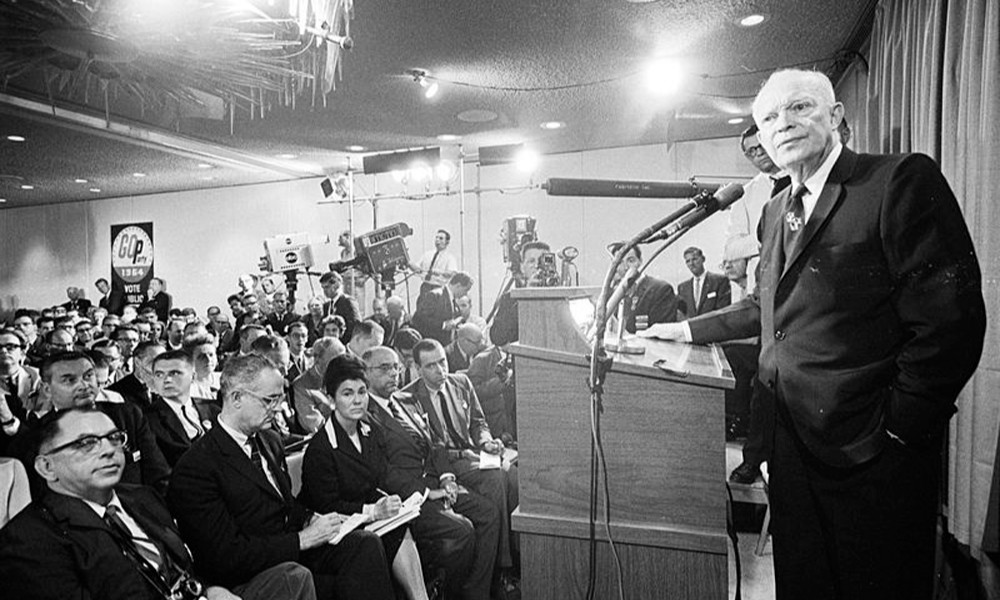 While it was two members of the U.S. Bureau of Public Roads who originally proposed to Congress in 1939 that a system of toll-free and intersection-free raised highways needed to be constructed across the nation, it wasn’t until 1956 that the Interstate Highway Act was passed by Congress and signed by President Dwight Eisenhower. After seeing the network of high-speed roads in Europe after WWII, Ike got behind the idea and pressed the legislature on the issue. Previous legislation that was passed in 1944 lacked a key component the 1956 act included: a way to fund construction of the roads.

2. The Numbers Indicate Which Way the Interstate Runs

With one exception, all even-numbered interstates go east-west, while the odd-numbered interstates run north-south. The interstate that breaks this rule is I-99, which formerly was US 220. That deviance was the fault of Rep. Bob Shuster, who just thought I-99 sounded better plus wanted it to be a callout to the No. 99 streetcar, of which he was a fan.

In addition, the numbers used for interstates are supposed to be exactly opposite those used for the U.S. highway system. That means the same-numbered highway isn’t in the same area as an interstate, which could understandably confuse drivers. For example, you’ll never see Interstate 5 in the same region as US Route 5 since they’re located on opposite coasts.

3. The Interstates Were Designed for Mass Exoduses 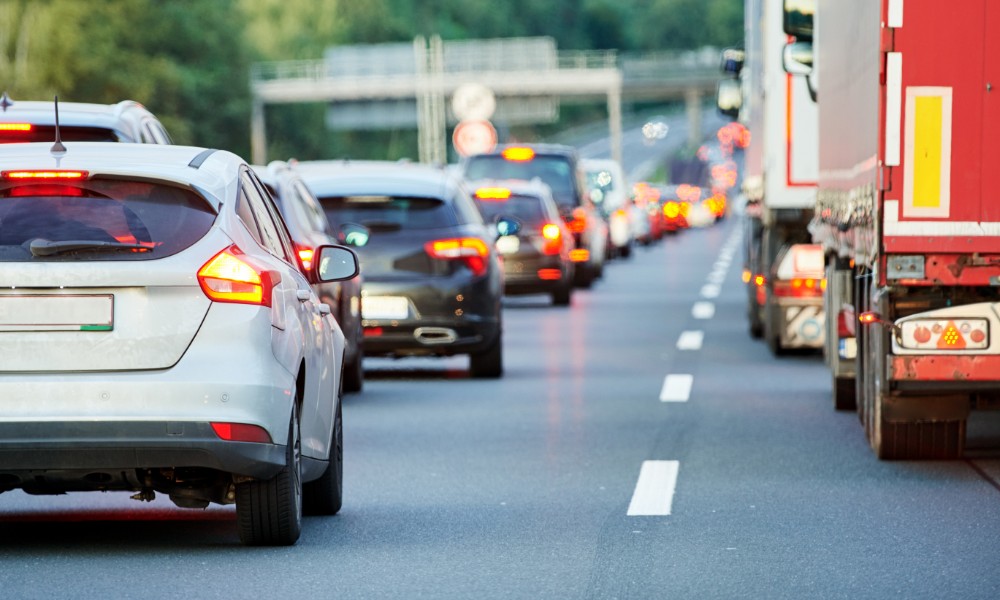 You’ve probably seen it played out in different apocalyptic movies and TV shows, but the U.S. Interstate System was originally designed for the dual purpose of relieving road congestion from day to day and to help evacuate major metropolitan areas quickly in an emergency. Both sides of an interstate can be converted so twice the volume of traffic can flow in the same direction, a concept called contraflow lane reversal. This is something states like Florida will sometimes use during evacuations ahead of a hurricane.

Originally, contraflow lane reversal was dreamed up for a nuclear strike scenario. After all, when the interstates were created it was during the Cold War and everyone was scared the Soviet Union would nuke one or more U.S. cities.

4. The Longest Interstate is… 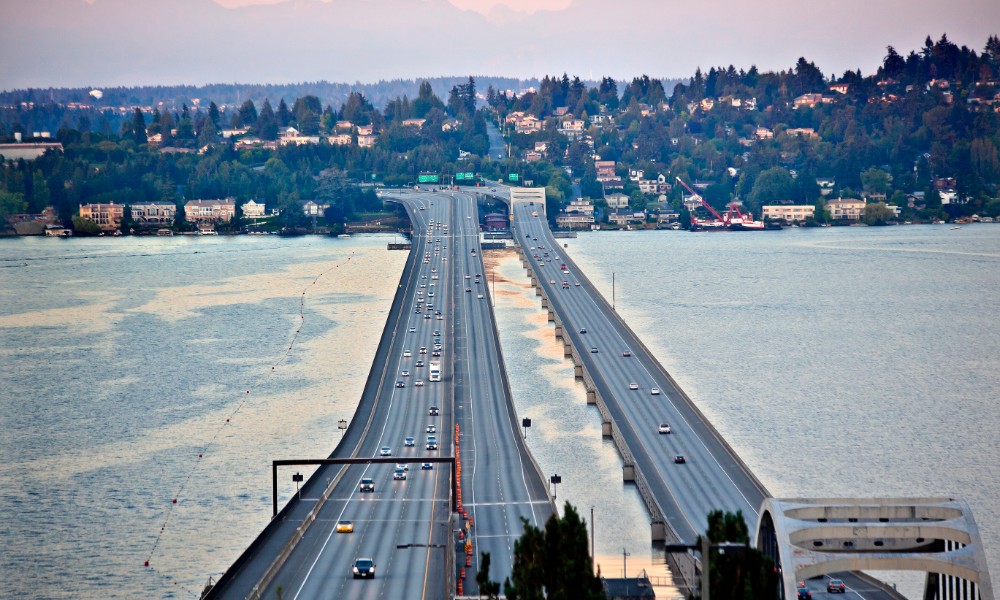 I-90 stretches from Seattle to Boston. (Credit: William Perry | Dreamstime.com)

Pretty much everyone has traveled on at least one long, straight stretch of interstate that feels like it will never end. The longest interstate highway in the United States is I-90, which stretches from Seattle, Wash., to Boston, Mass. The road goes for 3,020 uninterrupted miles, outclassing all others in the country and making for one epic road trip.

5. The Shortest Interstate is… 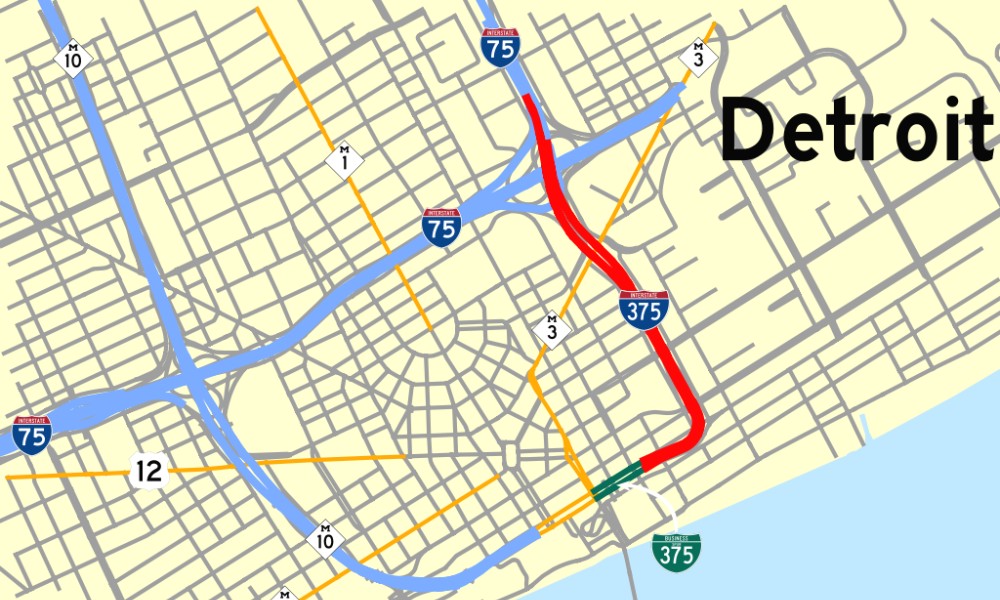 Interstate 375 in Detroit is one of the shortest interstates in America. (Credit: Wikipedia)

There’s some confusion about what interstate is the shortest in the United States. Some claim the section of I-95 that runs through Washington, D.C. is, but while it’s quite short, you have to look at the entire length I-95, which goes on for 1,908 miles from Maine to Florida. Interstate 375 in Detroit, Mich., is far shorter at just 1.062 miles, and while that’s certainly short enough to walk, there’s another interstate that is even shorter.

I-878 is officially the shortest interstate in the United States, at least for now. The 0.7-mile stretch of road connects I-678 to the JFK Expressway. People who drive on the highway might not even realize it’s an interstate since there aren’t any of the distinct red, white, and blue signs like you see on almost every other interstate in the nation. 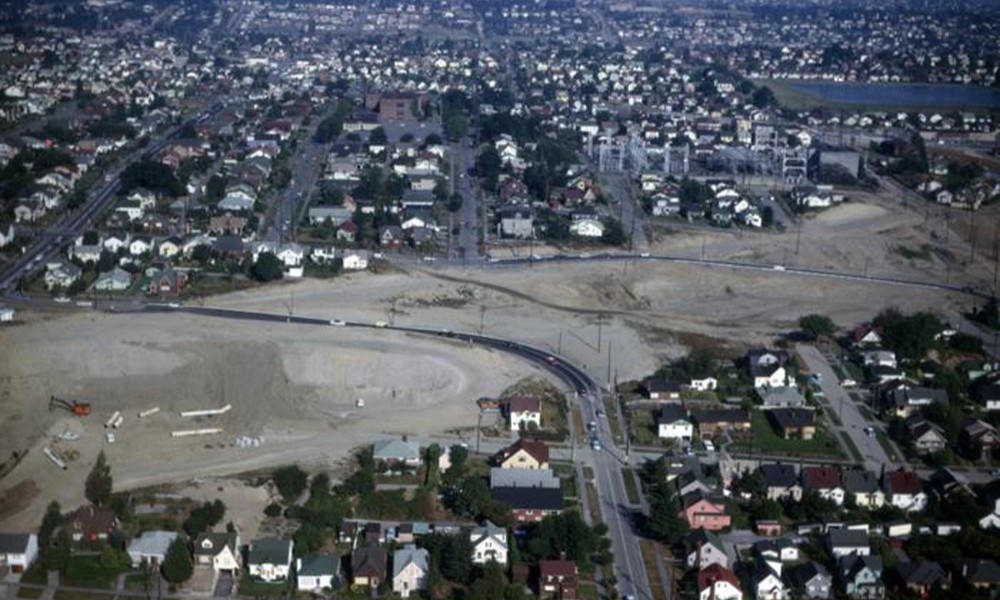 While the Interstate Highway Act was wildly popular when it first passed, because nobody likes congestion and traffic jams, once construction started in certain urban areas there was major resistance. Governments had to declare imminent domain to make way for the large, mostly straight interstates. Communities were destroyed or cut in half, and people were displaced from their homes, which understandably wasn’t a popular notion.

During the 1960s, protests in cities like Baltimore, New Orleans, New York, and Washington, D.C., helped result in some of the interstates suddenly terminating, partially defeating their entire purpose of providing direct and quick transportation. These interstates were famously called “roads to nowhere.”

7. Straightaways are for What? 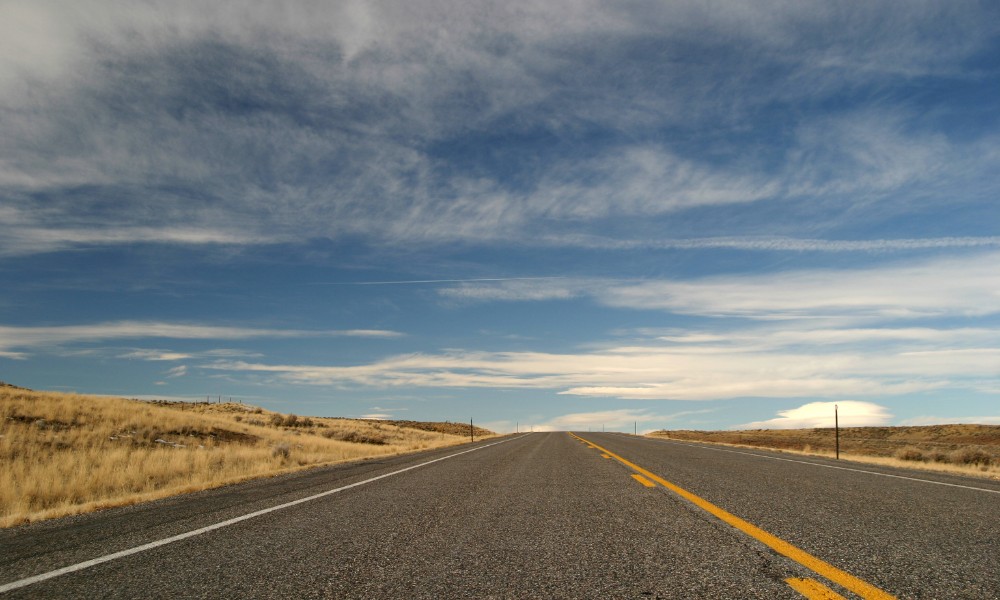 Maybe you’ve heard that one in every five miles of U.S. Interstates must be straight as an arrow because it allows for airplanes to make emergency landings safely. That’s sensible since aircraft have used interstates to land in unexpected situations, but the requirement that one in every five miles of the system is required to be straight is a flat-out myth. Most interstates aren’t expressly designed for emergency landings, even though they are excellent for just that.

8. When was the U.S. Interstate System Mostly Completed? 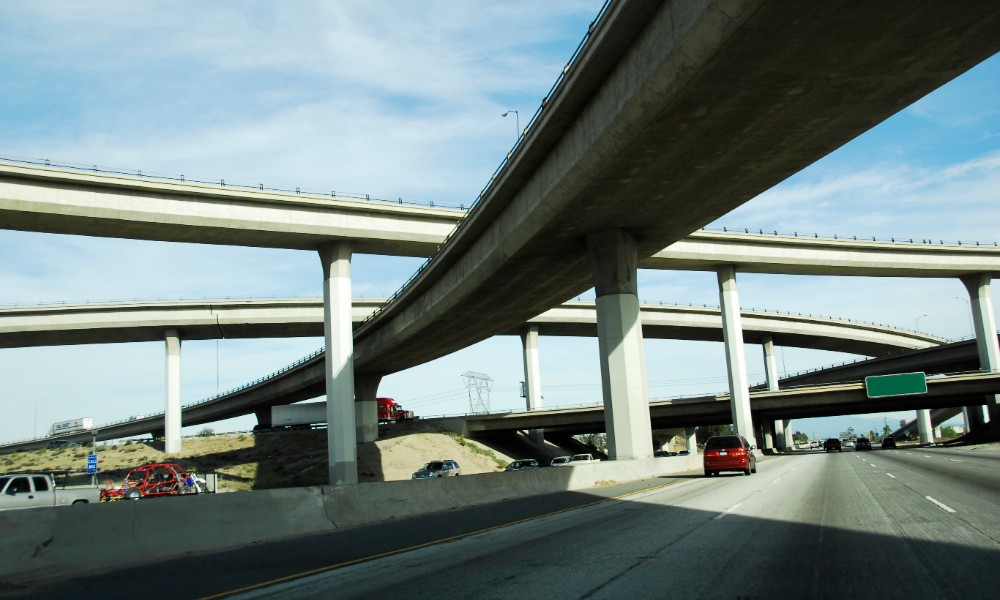 While we’ve covered that construction of the interstates started in 1956 under President Eisenhower, just how long did it take for the overall system to be completed?

Most younger people are surprised to learn it wasn’t until the 1980s that the system was considered to finally be fleshed out and “complete.” Yes, many interstates existed before then, but that was the point when the Interstate System covered the country, including Alaska and Hawaii. Just because the basic system was finally fleshed out about three decades ago doesn’t mean more interstates aren’t being added today, because in areas with exploding populations new interstates are still being constructed to alleviate traffic congestion. Most of that growth is happening in the so-called Sunbelt States, or the southern section of the country.

9. What was the First Interstate? 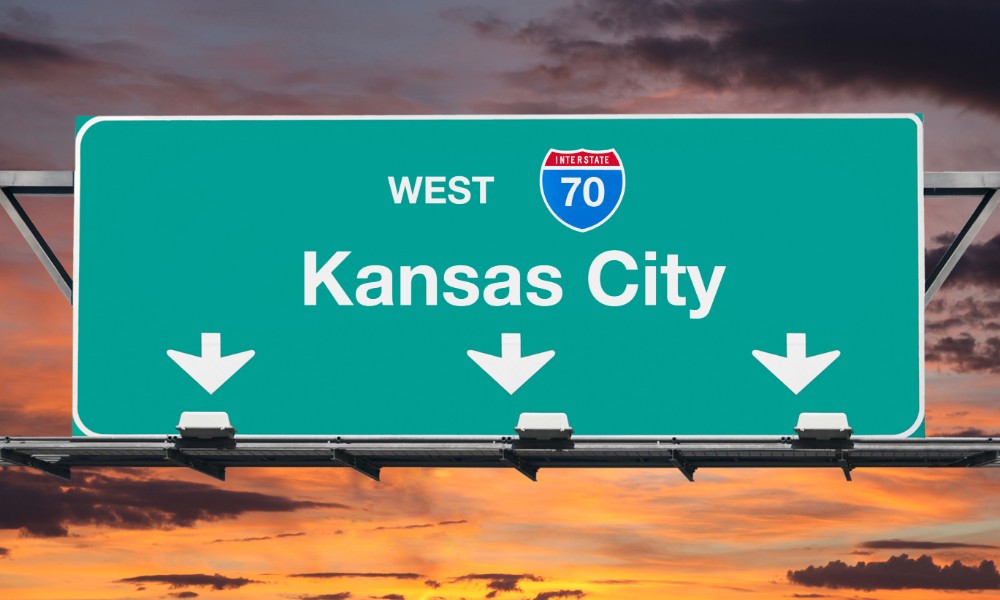 The answer to this question really depends on how you identify the first interstate. Technically, the first one to have any work completed was I-70 in Kansas, outside of the state capital of Topeka in 1956. At about the same time work was started on the Mark Twain Expressway portion of I-70 in St. Charles County, Missouri. Some will debate that Missouri was the first state to move forward on the U.S. Interstate System, while others will say it was Kansas. Whichever side you choose, both were working on what became I-70, so you could argue it was the first interstate to have any portion completed.

Not to be outdone, Pennsylvania claims it was the first one to complete a portion of an interstate, although some think its claim is pretty dubious. The afore-mentioned section was the Pennsylvania Turnpike, which connects Irwin and Carlisle. It was completed way back in 1940. While this stretch of highway obviously predated the official U.S. Interstate System, some try to count it as the first completed section of an interstate anyway. You can be the judge if that counts or not. 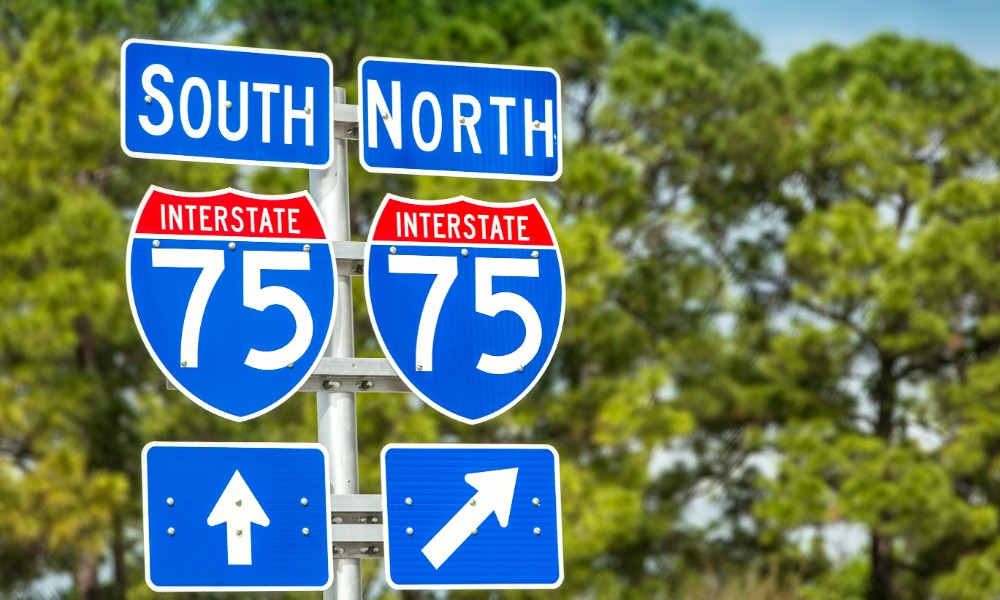 Everyone knows the signs used to mark interstates — a red, white, and blue shield-like design with the interstate number printed right in the middle of the blue section. While you might think the design was created by a famous artist or politician, the origin is a little more interesting.

The federal government asked state highway officials to submit designs to be considered. They were to be visible during the day and night in all sorts of weather for obvious reasons. Ultimately, officials selected a combination of designs sent in from Texas and Missouri. The combined design has been trademarked, in case you were wondering.

11. Highs and Lows on the Interstate 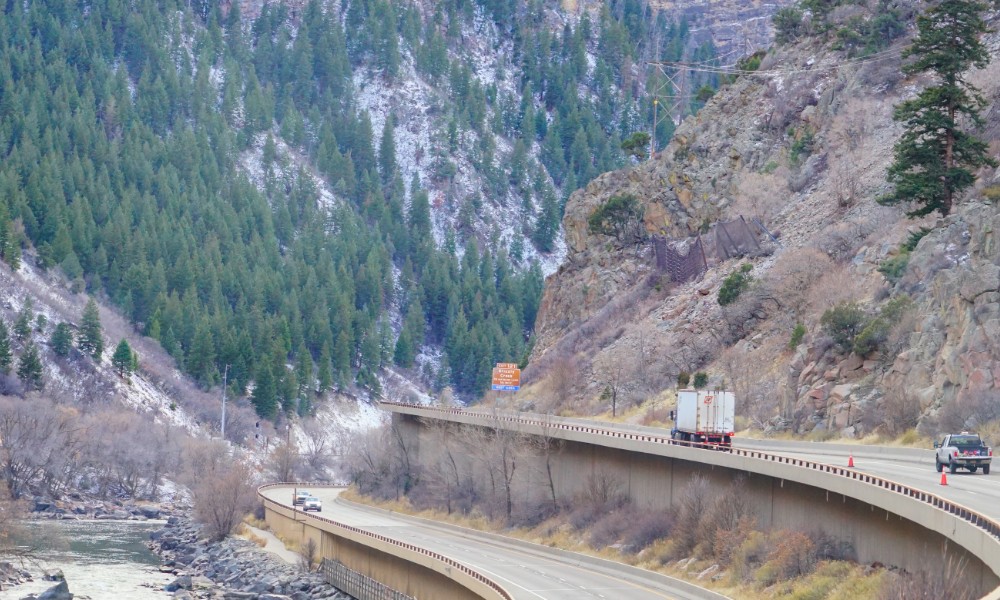 Because the U.S. Interstate System stretches from coast to coast and covers the northern and southern extremities of the nation, the roads had to be built through all kinds of terrain. Construction of the interstates meant facing quite a few challenges, including going over mountains. The highest stretch of interstate in the country is found in Colorado, where I-70 goes through the Rocky Mountains, thanks to the Eisenhower Tunnel, at an elevation of 11,158 feet. If you want to get to the lowest elevation for an interstate, head to California where Interstate 8 in El Centro sits 52 feet below sea level.

12. You Can’t Get There Using the Interstate 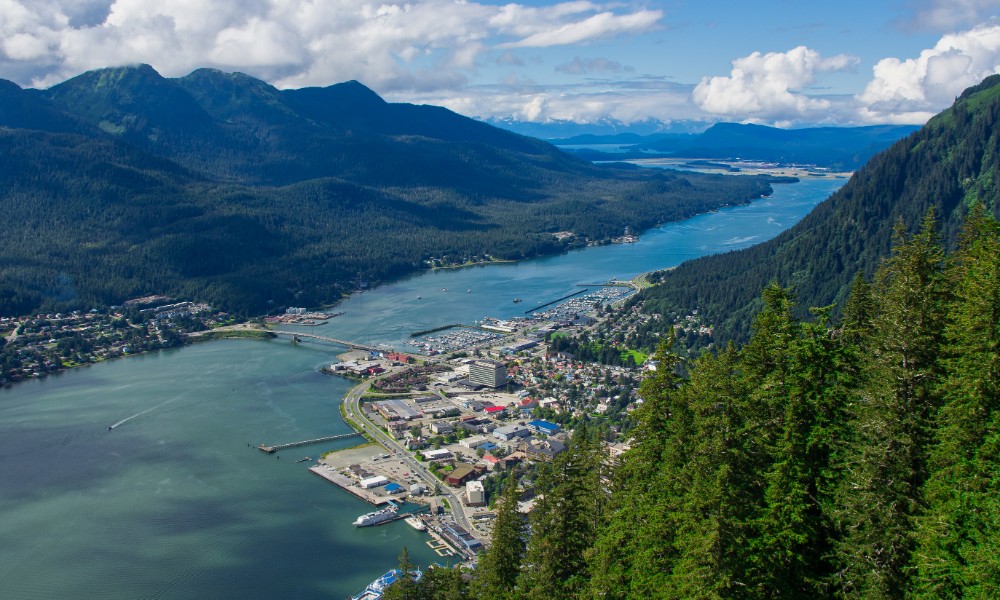 While you can go to all sorts of places, especially major cities using the U.S. Interstate System, there are quite a few destinations you’ll have to reach using other roads. However, a whopping 46 state capitals are connected to at least one interstate. That means there are four state capitals that aren’t served by any interstates: Dover, Del.; Pierre, S.D.; Jefferson City, Mo; and Juneau, Alaska. Some people wrongly think Carson City, Nev., isn’t connected to an interstate, but I-580 has fixed that problem. 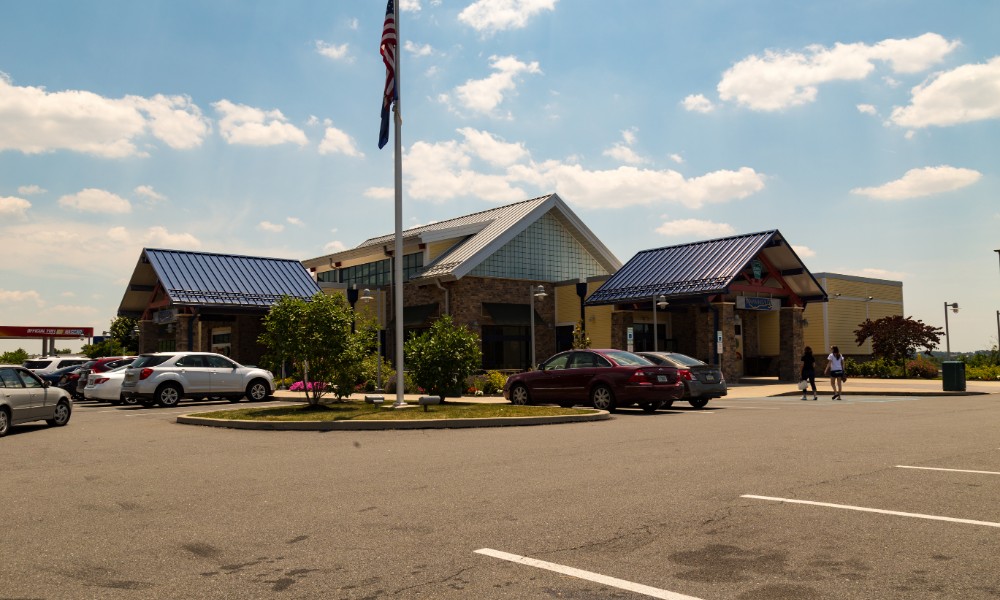 Pretty much everyone has used an official government rest stop along an interstate at least once. They usually have some picnic tables, smelly bathrooms, walking paths for stretching your legs, and maybe a few other amenities, if you’re lucky. However, you’ll never find a restaurant of any kind at rest stops, and that’s international. When Congress passed the Federal-Aid Highway Act in the 1950s there was a debate about allowing food vendors to set up shop at rest stops. It was voted to not allow such a thing, so people had incentive to get off the interstate and do business at the many towns and cities along the way, helping out the local economies. In the 1980s the law was changed to allow for vending machines at rest stops, but that was it.

14. Most Deadly in the Nation 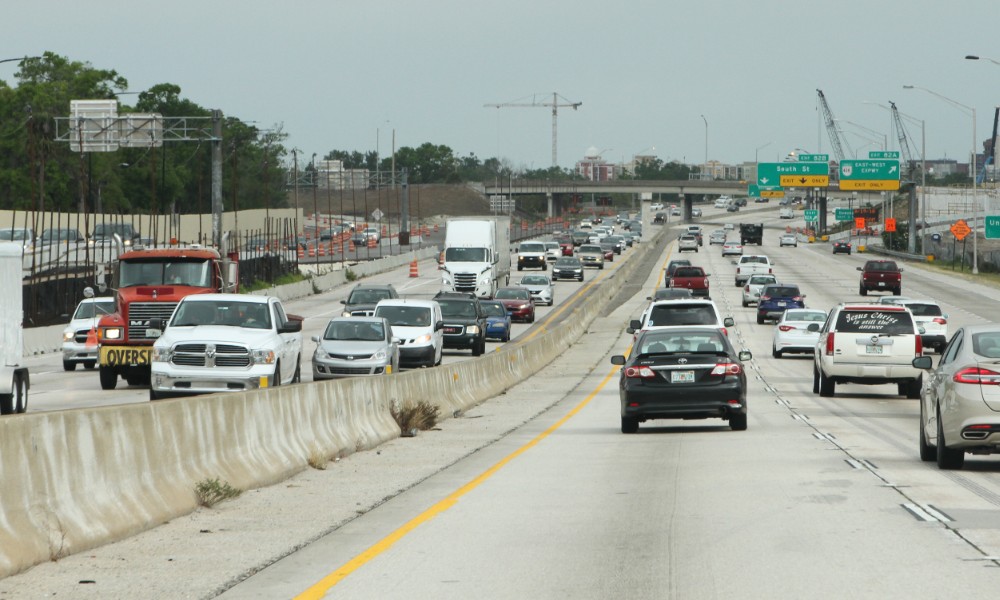 Some stretches of interstate are scary, causing drivers to white knuckle it for miles. Others are deceptively dangerous since they seem to be harmless, like the infamous stretch of I-15 between Las Vegas and Los Angeles, which is super straight and lulls drivers into being inattentive. However, despite common lore, that section of interstate isn’t even in the top 10 for deadliest in the nation.

The top spot goes to Interstate 4 in Florida, which is supposed to be the worst state overall for interstate fatality rates. I-4 is only 132 miles long, connecting Tampa to Daytona Beach, but with 1.4 deaths per mile it is the deadliest interstate in the nation, at least for now. Experts say Florida interstate deaths are largely caused by distracted driving as people try using their phone while driving.