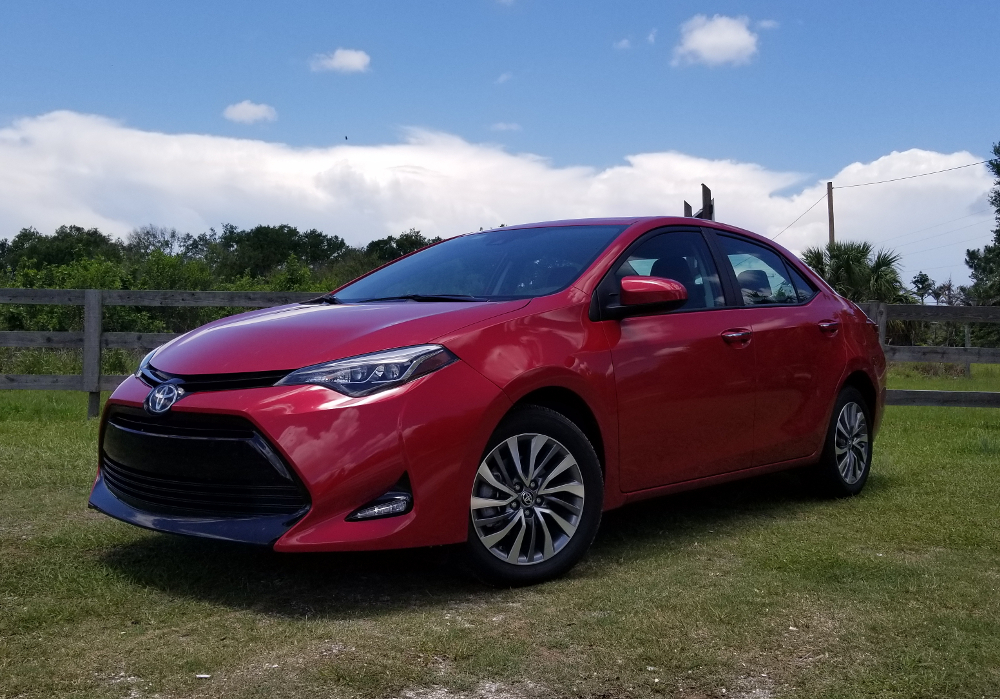 Despite being long in the tooth, the 2018 Toyota Corolla remains the No. 2 selling vehicle in its class, just behind the class-leading Civic. I recently spent a week behind the wheel of a 2018 Corolla XLE to figure out what is just so great about this aging sedan.

After a week of driving this simple sedan, am I convinced you should contribute to its status as the second-best selling small car in the U.S.? Keep reading to find out.

The 2018 Toyota Corolla’s styling was once revolutionary, but it debuted back in 2014 and the number of changes to its competitors and within the Toyota lineup itself make it look like a dinosaur. It’s not ugly by any stretch, but the pointed nose and straight, sharp creases are being phased out for swooping creases and blunt noses. Even the Camry and Avalon have gone in this direction, leaving their poor little brother in their hand-me-down clothes.

I am guessing this will change in the next few years. In fact, the consensus says the new Corolla will be in showrooms in the 2020 model year. That seems to be Toyota’s way of doing things, as the Camry comes first, then the Avalon, and finally the Corolla. The trick-down redesign at its finest.

If you’re looking for a little more attitude, you can opt for the SE or SE models, which include rear spoilers, special grilles, and other sporty touches. Inside, the Corolla is far from perfect, but it has a lot of good going for it. First are the dashboard and the instrument panel. Some people may find it oddly flat, but I love the throwback nature of the upright. Toss in all the modern tech, and you have a nice mixture of old and new. This design also makes the cabin feel spacier since you don’t have the instrument panel or center stack bulging out and sucking up valuable real estate.

In the driver’s seat, nothing special is going on, as the steering wheel is basic, if not cheap-looking. The gauges perform gauge-y things and the controls are all within reach, but their neutral positioning between the driver and passenger makes them a little tougher to reach and use. One area I can fault the Corolla, it’s cubbies, as it lacks cubbies to stash things like cellphones and other annoying pocket-dwellers. While the exterior is a 2 out of 10, the throwback interior adds to that. This brings us to a 4 out of 10 for styling.

While it’s hard to say the Corolla is somewhat comfortable, there are things it does well.

The front seats have enough padding and support for a shorter road trip, but they will get your backside singing after a few hundred miles, plus they lack any real bolstering. My XLE model had SofTex fake leather upholstery that’s fun to look at, but it got super-hot in the Florida sun, and the Corolla lacks ventilation. I would prefer these be a no-cost option, so buyers can get the fabric seats instead.

In the rear, the seats are almost flat and can get a little hard. Fortunately, though, the Corolla has plenty of room, as they offer 41.1 inches of rear legroom. Despite that incredible legroom, the trunk still has 13.2 cubic feet of cargo room for luggage.

One thing that surprised me was just how quiet the Corolla’s cabin was. Even under heavy throttle with tons of CVT drone, it was still about as quiet as I would expect from an ECO-rig.

The 2018 Toyota Corolla’s tech side of things is a mixed bag. While the standard 6.1-inch touchscreen is great and the 7-incher in my XLE tester was wonderful, the Entune system is showing its age. The apps are the same as you see in just about any other car in its class, but it lacks two biggies: Apple CarPlay and Android Auto. Sure, mine had integrated navigation, and the navigation app is available on the LE trim, but the integrated navigation is outdated – it wouldn’t find my house that was built a year ago – and the Scout navigation app is, well, garbage. We’ve had the latter in our 2016 RAV4 Hybrid since we bought it brand new, and we default to Google Maps on our phones.

Other than the infotainment system, the rest of the interior tech is bare bones. The only other interior tech of note is the one standard USB 2.0 port in the center stack, and the keyless entry and ignition. The audio side includes six speakers across the board. It sounds decent, but this same audio system seems to work better in my RAV4.

On the safety side of the tech world, the 2018 Toyota Corolla is a superstar in its class. It comes standard with Toyota Safety Sense P, which includes automatic emergency braking with pedestrian detection, lane-departure alert with lane-keep assist, automatic high-beam headlights, and adaptive cruise control. The latter is great for just setting the cruise and going, but keep in mind that the Corolla will not bring itself to a complete stop with traffic.

While most of its tech is “meh,” its standard safety tech pads the stats a bit. IT deserves a solid 6.5 out of 10. Performance and Corolla haven’t deserved to be in the same sentence together for many years, but I am still holding out hope Toyota will launch a performance-oriented model at some point. The 2018 Corolla, though, fails to deliver with its wheezy 1.8-liter four-cylinder engine that produces 132 ponies and 128 pound-feet of torque (140 horsepower and 126 pound-feet in the L ECO trim). This limited oomph routes through a fun-killing CVT that drones with the best of them.

All that being said, the Corolla delivers good-enough acceleration, and you shouldn’t fear highway speeds. But the CVT keeps the revs sky high when accelerating. Fortunately, the sound deadening does a good job absorbing all that.

The ride is soft in the Corolla, making it feel like a more upscale ride for the money. But this sacrifices a bit in the corners. The steering system is light and is void of feedback.

While its performance is adequate, where the Corolla is good at passing… gas stations, that is. It delivers between 27 mpg city, 35 highway, and 30 combined with the six-speed manual transmission and 30 mpg city, 40 highway, and 34 combined in the L ECO trim.

Another feather in the 2018 Corolla’s cap is that these things are cockroaches of the automotive world, and I mean that in a good way. No, not just because you see them everywhere. I mean because you can’t kill them – they run forever with regular oil changes and maintenance.

While it is no performance sedan, the Corolla deserves a solid 6 out of 10 because of its outstanding fuel economy, longevity, and surprising comfort. As much as I love Toyota’s current direction, I would have to answer that with a firm “no.” There are too many other great, more modern options on the market with a similar MSRP. Models with more features, better performance and better looks that come to mind include the Mazda3, Honda Civic, and Chevy Cruze.