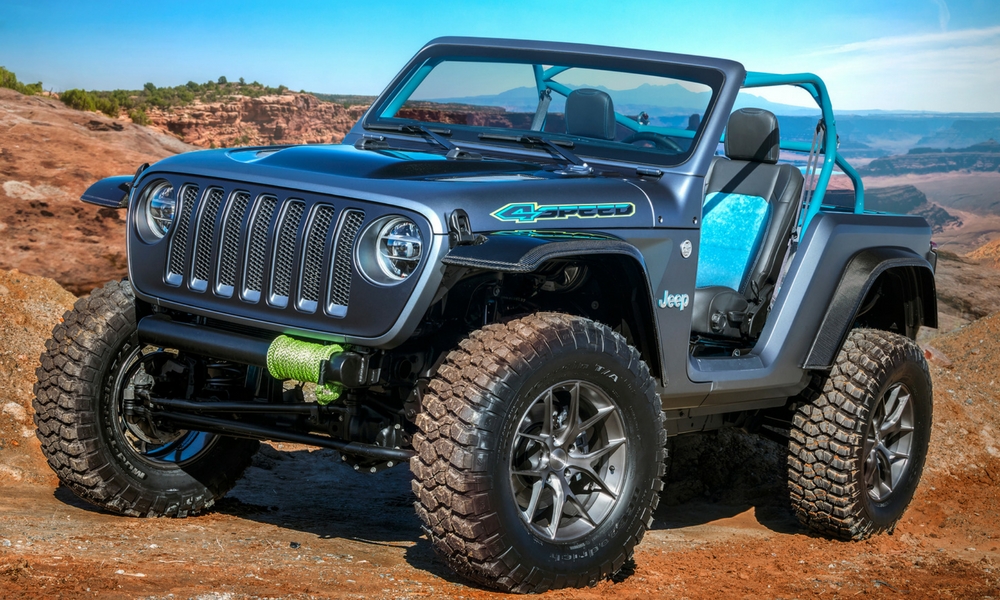 Every year for the Moab Easter Jeep Safari, Jeep and Mopar create several concept vehicles. This is the first batch of concepts built using the JL, so that’s kind of a big deal. As usual, the two brands have used a few nostalgic names, but that doesn’t really mean too much.

One of the most interesting is the Jeep 4Speed, which shows extensive lightweighting. Among the mods is a carbon fiber hood, a carbon fiber rear tub, and carbon fiber fender flares. It also uses the new turbo 2.0-liter engine. Your eyes aren’t deceiving you: the Jeep is 22 inches shorter, but the wheelbase is stock.

The Jeep Sandstorm is patterned after Baja racers, so you could conceivably use it for going fast on long stretches of fire roads. Jeep says you can still rock crawl with it, so maybe it would be a good competitor against the Ford Raptor.

Another standout, the Jeep B-ute Concept, is based on the little Renegade. Wider fender flares, heat extractors in the hood, different front/rear fascias, rock rails, roof rack, plus 17-inch wheels with a 30-millimeter offset make for a far more aggressive look than stock. The whole Renegade customization thing seems to not be taking off, but Jeep’s still trying.

You can see all these concepts in person if you head to Moab. Just have fun finding a camping spot, because all the hotels are likely booked solid.