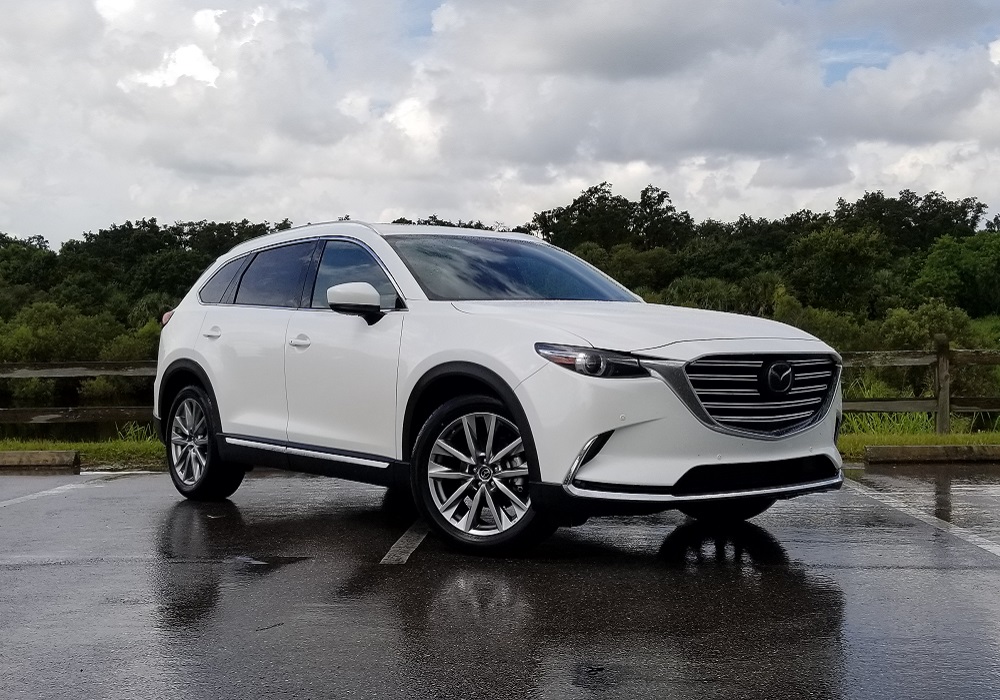 When Mazda revealed the redesigned CX-9 back in 2016, it was a trendsetter. It tossed a hand grenade in the terrible three-row crossover styling trend and forced the competition to arise from its slumber and do something about it. Well, Mazda may regret this as some of the CX-9’s key competitors are fully awake now and have been through revolutions of their own.

With all these changes to the segment, is the CX-9 still the innovator it was back in 2016? I spent the last week in a 2019 Mazda CX-9 Signature, and here’s what I think. 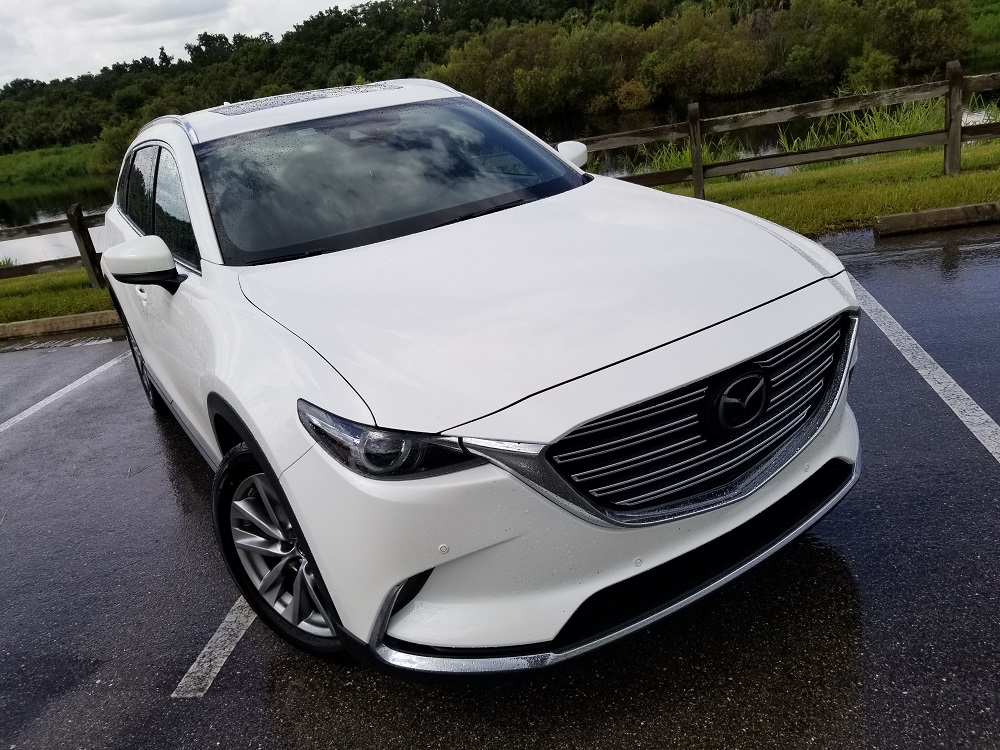 Mazda’s KODO design continues to impress, making the CX-9 one of the most attractive non-luxury three-row crossovers on the market. Its competitors, like the Chevy Traverse and Honda Pilot are catching up, but the CX-9 remains ahead of them.

Up front, you have Mazda’s long signature nose that includes protruding upper portion that kicks back nicely into its satin-chrome grille. Flanking the grille are the adaptive headlights connected by a swooping satin-chrome grille underscore that ties the whole front end together. 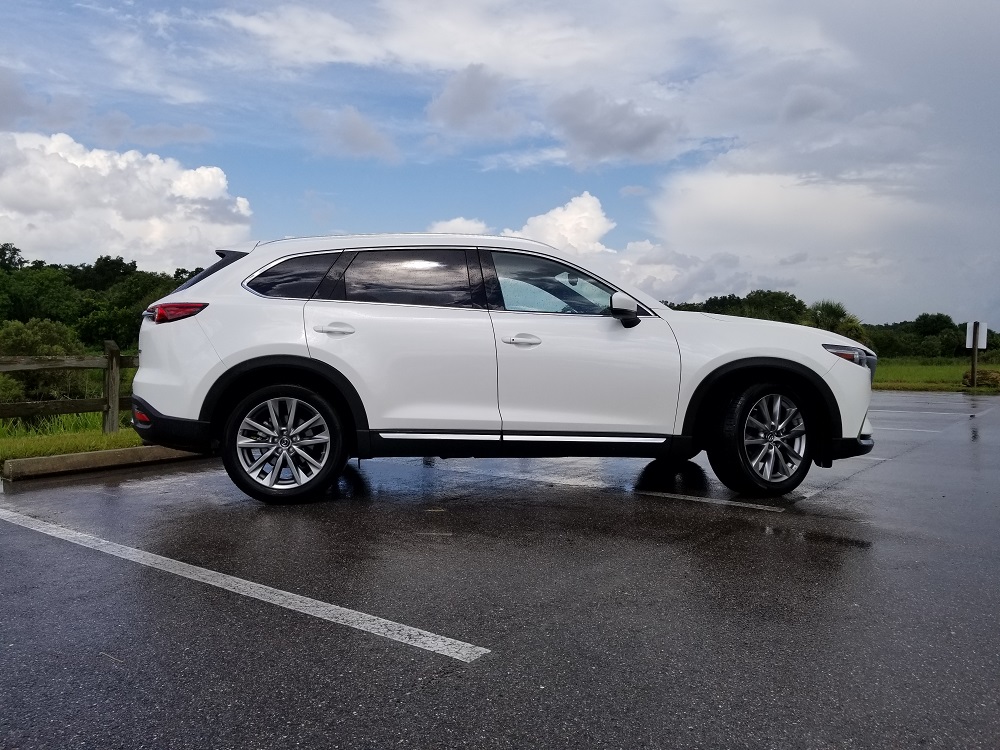 In the profile view, things are less exciting, but this angle puts its distinct front end on display and shows off its rounded rear hatch. The CX-9 is lacking creases in this angle that could help give it a sharper look, but it seems to work sans creases.

Continuing around to the rear ties everything nicely into the front with its wide taillights connected by a satin-chrome bar.

Inside, the CX-9 boasts a stunning cabin, especially in the range-topping Signature trim I have, as it features lots of contrast between the black, satin chrome, and wood trim. With the amount of black Mazda used in the interior, I should complain, but the trimming does a great job breaking it all up. Also, all the buttons and controls are logically placed — especially the ones just behind the gear shifter — and the split-open center console kicks the class up just a touch. 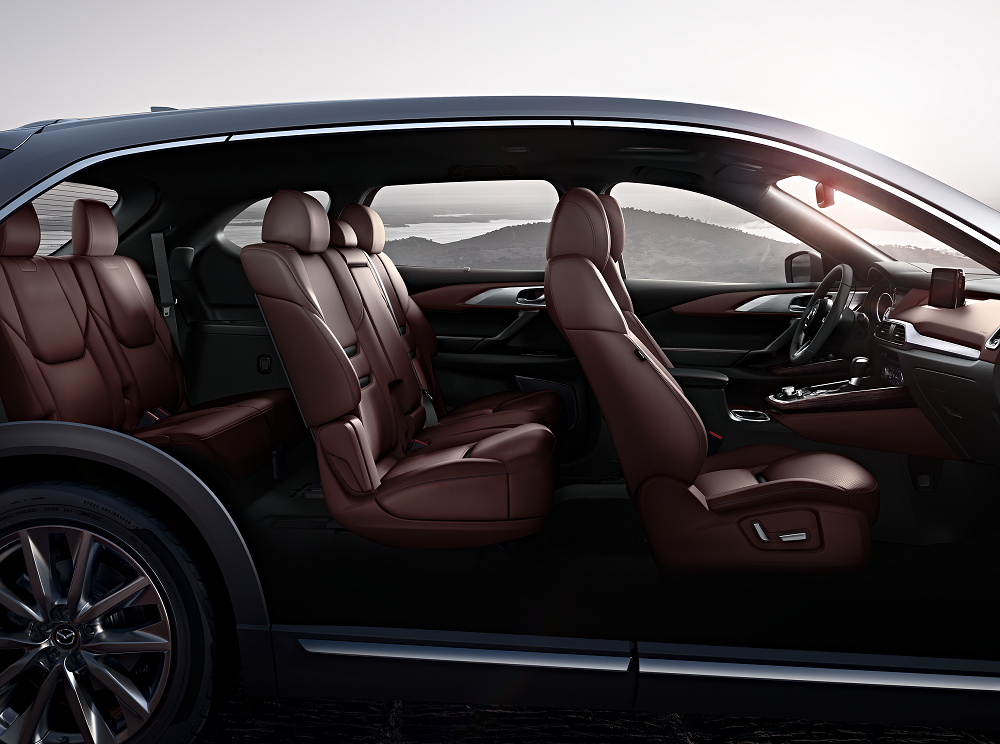 The Mazda CX-9 punches well above its weight class in comfort, as the front seats are firm but still comfortable. They also provide plenty of adjustment, so finding that perfect seating position is a cinch. One issue up front, though, is the center console protrudes into the driver’s leg area a bit, so my knee constantly rests against it. Thankfully, Mazda noticed this and added a knee pad there, but it still gets uncomfortable on longer hauls.

The second-row seats are equally comfortable and provide plenty of legroom at 39.4 inches. Getting into these seats would generally be pretty simple, but my Signature model comes with the Rear Seat Entertainment package (a $1,995 option) and the screens stick out, begging to get smashed one day. 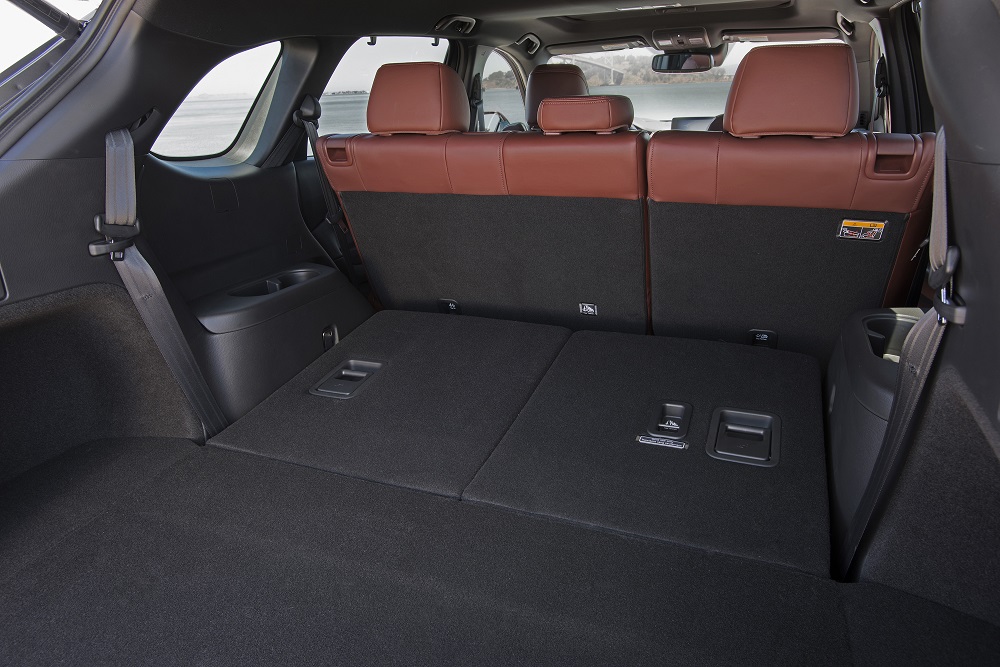 The third row, like in many three-row crossovers, is a compromise with its 29.7 inches of legroom and awkward positioning. I suggest using these seats only in a pinch and leaving them folded down to maximize the 38.2 cubic feet of cargo with these seats down. With these contortionist-friendly seats upright, the CX-9 can haul just 14.4 cubes of cargo. 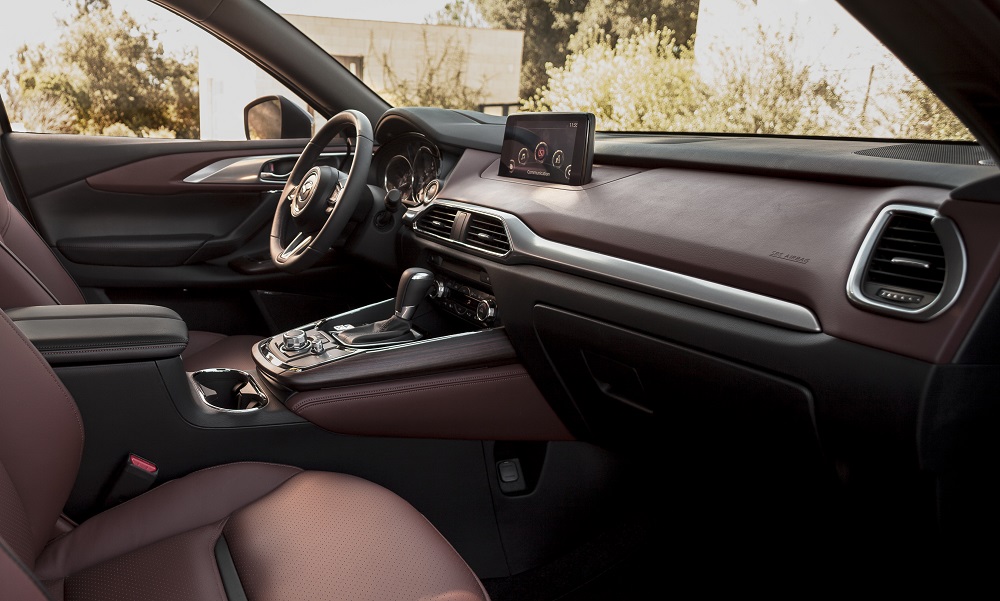 The 2018 Mazda CX-9’s tech is a mixture of good and bad — aren’t all vehicles these days? The CX-9 comes standard with a 7-inch infotainment screen, but my Signature model has the range-topping 8-inch screen that seems to float atop the dash.

First, that popped-up look is about as modern as popped collars on pink polo shirts, so Mazda may want to rethink that. Functionally, the CX-9’s infotainment system is better than many of the corpuscular one’s I’ve dealt with — hi, Lexus! — as the rotary knob at least makes sense and does not require constant attention to ensure you are on the right option before clicking. And if the rotary knob is too much for you, the optional 8-inch infotainment system has a redundant touchscreen function. That said, there is a learning curve to figure out where everything is and what all the logos mean.

The navigation system is accurate and simple to use, but its voice-recognition system is very so-so. I struggled to get it to find POIs on multiple occasions.

The Signature model I’m testing features the upgraded Bose audio system, and it sounds fantastic. Also gracing this model are adaptive LED headlights that keep path ahead well lit, even in curves, though I felt they could turn a little sharper at times.

Earlier, I mentioned the Rear Seat Entertainment package that my model came with. While this is excellent for keeping the kids in check on longer drives, setting it up each and every time I get into the car is a bear. Sure, I could just pop in a DVD and be done with it, but my kids like Netflix and YouTube videos. Luckily, this system has screen-mirroring capabilities, so I could play YouTube on my phone and cast it on the screens. Unfortunately, though, this is a tedious process that adds about five minutes to your loading time. Plus, I couldn’t get it to screen mirror Netflix. This is not a bad system at all, but just prepare yourself for some struggles initially. 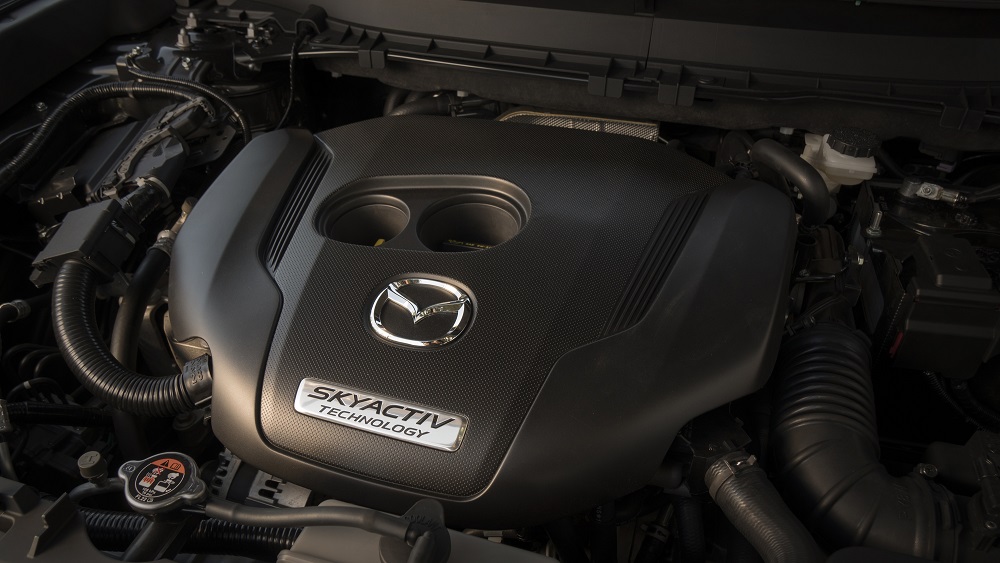 When you hear “three-row crossover” and “four-cylinder,” you may cringe at the idea of just how slow it will be. Fortunately, the CX-9 boasts a turbocharged 2.5-liter four-cylinder that injects 250 horsepower and 310 pound-feet of torque into this big people mover. Of course, that’s with premium fuel — it drops to 227 horsepower with the cheap stuff.

What really makes the CX-9’s engine great is that its 310 pound-feet of torque digs in at 2,000 rpm. This means you are just a tap of the foot away from V-6 levels of pulling power. But, like many turbocharged four-cylinder engines, after that initial dig from a dead stop, the CX-9’s pulling power fades to about average. Though, it is fun as hell and sounds great for the first few seconds.

Handling the shifting duties is a six-speed automatic transmission that delivers smooth shifts when cruising and sharper shifts with a heavier foot or with Sport mode engaged. It would be nice to have an eight-speed gearbox in this big crossover, but this cog swapper does fine for now.

For its size, the 2019 Mazda CX-9 is a capable handler as it feels more like a compact crossover than a big three-row model. There is a little tradeoff in comfort here, especially with the 20-inch wheels, but it’s not a gut rattler by any stretch. What’s more, the CX-9 is no slouch in the trailering department either with its 3,500-pound towing capacity more than doubling some of its competitors.

Fuel economy rings in slightly above average for the class in the 2019 CX-9 at up to 22 mpg city, 28 highway, and 24 combined. Add all-wheel drive, and these numbers fall to 20 mpg city, 26 highway, and 23 combined. Here in the flat state of Florida, I’ve had no issue hitting these numbers, but others have noted the real-world fuel economy is just not there in the CX-9. 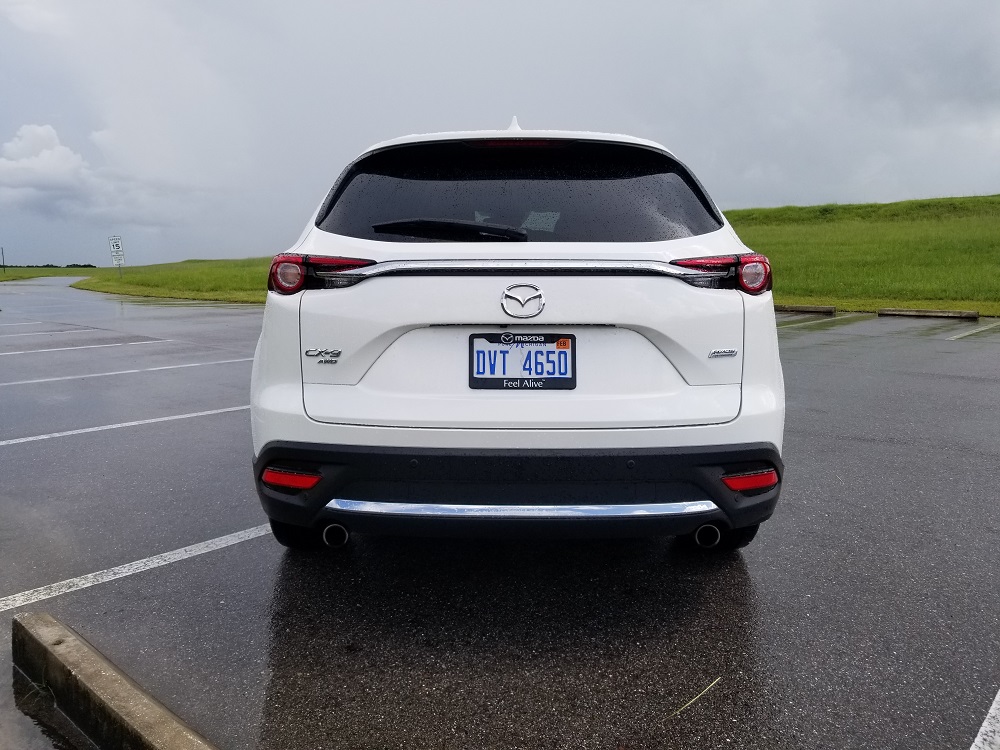 The Mazda CX-9 is a neat mixture of class and performance, especially in the higher trims, but it is far from perfect, and its newer rivals are overshadowing it. Models like the Chevy Traverse, Honda Pilot, and Hyundai Santa Fe are all newer and do the crossover thing better than the CX-9. But if you are looking for more from your crossover, like a little added zippiness, the CX-9 may be perfect for you.