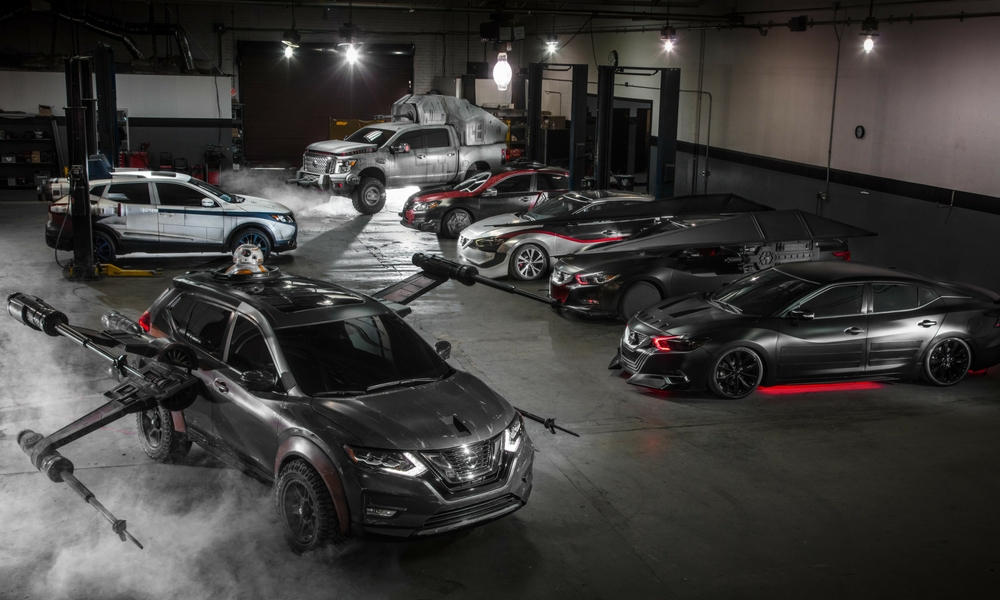 We’ve seen cars themed after Star Wars characters and vehicles before, but Nissan has taken it to a whole new level. You have Nissans sprouting wings, no less, which is way beyond anything practical or even tactful, but whatever. To pull off these crazy modifications, Nissan worked with Industrial Light & Magic and Vehicle Effects shop.

One is a Captain Phasma Maxima. That’s appropriate, since both promise so much and yet deliver so very little. They share the same front fascia, but Phasma is shinier. Another Maxima was styled to look like Kylo Ren, but it’s just not as impressive, naturally.

Then there’s an Altima modified with a TIE Fighter cockpit grid on the windshield, plus the center portion of the fighter’s wings applied to the wheels. The top of the spaceship is adhered to the top of the car, making for an overall abominable wreck. The Titan that’s an AT-M6, whatever that is, looks like a mess.

The most out-there rides are the Maxima designed to look like Kylo Ren’s TIE Silencer, and the Rogue modified like Poe Dameron’s X-Wing. Both have sprouted wings, so actually driving them would be interesting and risky. The Rogue also has the BB-8 droid popping out of the roof.

Maybe some people will find these cars fascinating. Maybe someone will buy a Rogue and fantasize they’re shooting down TIE Fighters while they sit in rush hour traffic. This is all just so bizarre.