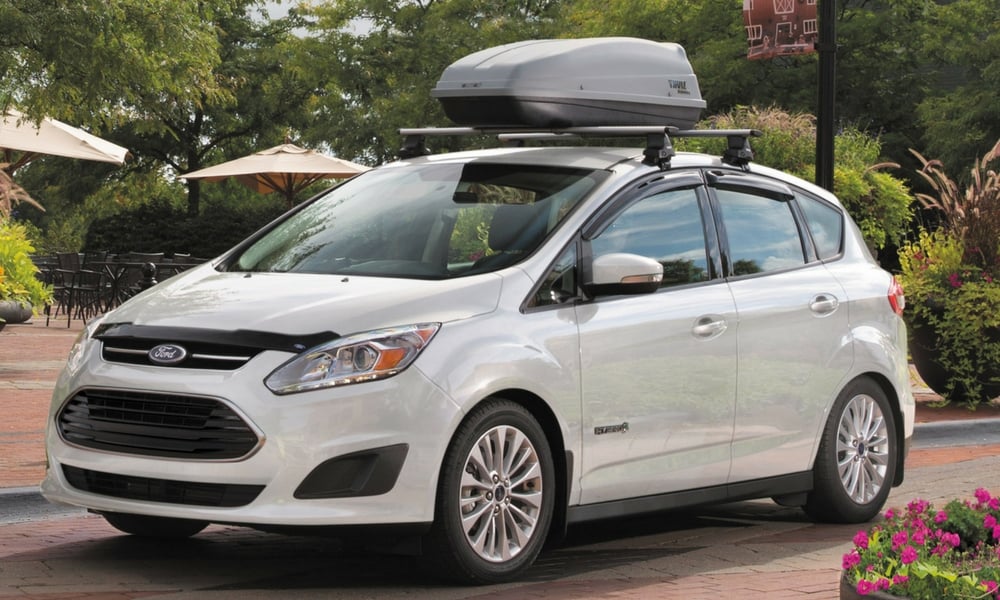 Every year, automakers kill off vehicles for various reasons, slow sales being No. 1. Of course, the big headline grabber for 2018 is Ford ending the sale of all cars in the North American market, except two. Many other vehicles go away without anyone noticing, mostly because they weren’t iconic or big sellers.

Here’s a look at some of the cars that are going end of life by the close of 2018. This strange plug-in hybrid has been a slow seller in North America since the beginning. Ford announced months ago it was a goner by the end of 2018, so this one really isn’t part of the great Blue Oval car culling.

Not only did the C-Max look weird, it was outclassed by the competition in range, efficiency, and cargo capacity. There really wasn’t much left to make it compelling to buyers. If you want a minivan with the Nissan badge on it, a pre-owned model is the only way now. Nissan has wrapped production of the Quest, thanks in part to new or revised competitors like the Chrysler Pacifica and Kia Sedona. Despite what some people will tell you, minivans are still relevant today, as evidenced by the fierce advertising and escalation of premium features in them, like on-board vacuums.

The Quest also struck out with families after it horrendously failed some crash tests, with the results grabbing enough headlines to keep research-savvy shoppers away. The only victim of Ford slaughtering its car lineup for 2018, production of the Focus for North America supposedly will stop in May. The Fiesta and Taurus will both live on into 2019, when they too will go to that great garage in the sky. The Fusion is supposed to stick around until sometime in 2020 – at least that’s the plan right now.

Keep in mind the Focus, along with other Ford cars, will continue to be sold in Europe, Asia, and elsewhere. That leaves the door open to a return later. We’ll see what the future holds for Ford cars. We first knew this as the sublime Infiniti FX35. The exhaust note had an aggressive snarl that made everyone know this wasn’t just some tame crossover. It was a great way to haul the kiddos, lots of luggage, and whatever else around while still having a great time behind the wheel.

Slow sales were what killed off the QX70. Infiniti is placing its hopes in the QX50 for now. Supposedly, a true replacement for the QX70 is coming in 2021 or 2022, but it probably won’t have that exhaust snarl, because the likelihood is high that it will be an EV. The rumors about this cute little car going away have been circulating for a few years. Unfortunately, they turned out to be true. Thanks to the financial burden of the Dieselgate fallout, coupled with overall declining sales, the Beetle must go away at least for now.

Don’t be surprised if Volkswagen brings this iconic car back in the future. It would likely be electrified to one extent or another when that does happen. Perhaps that would reignite sales, ensuring the Beetle sticks around for a longer run than this last one. A rebadged Holden Commodore, this performance sedan packs a strong V-8 punch. If you’ve been lucky enough to sit behind the wheel of one of these, you understand why it has a strong cult following. If not, you’re probably confused about all the fuss. Thanks to a bland appearance and little marketing from Chevrolet, this model suffered from dismal sales. That, and Holden has shut the doors on its Adelaide production line in Australia. Jeep didn’t want to take any chances with ramping up production of the all-new Wrangler JL, so it kept making the proven JK into 2018 at the same time it was churning out the first JLs. That era has now come to a close, because the last JK rolled off the line in Toledo. It was a white Rubicon Unlimited, which is a good way to celebrate a vehicle that pushed Jeep to new levels of popularity. Don’t mourn too much, because the JL delivers all kinds of extra goodies you don’t get with the JK, like a windshield that’s easier and quicker to fold down. If you want a compact Buick car, you’ll have to go with a pre-owned model, because the Verano is a goner. While people really want compact premium crossovers, compact premium cars aren’t as big of sellers. The Verano also had to contend with stiff competition, and it just wasn’t bringing in the sales to justify its continued existence. These two Volvo models are getting long in the teeth, with the brand now remaking the 40 series lineup and having released an all-new XC60. On top of that, Polestar is striking out on its own, instead of just being a tuning division under Volvo.

If you want to taste the feeling of having more power, stiffer springs, Ohlins shock absorbers, special Polestar calibrations for the automatic transmission, and other extra goodies on a Volvo 60 series vehicle, 2018 is the last time to get all that. Just think how surprised the BMW driver in the next lane will be when you light it up. Based on the Toyota Prius, this luxury hatchback hybrid never really caught on in North America. It did okay sales-wise when gas prices were high, but its popularity has slid every year since. Shoppers seemed to struggle with the high cost of this vehicle, especially considering the fact that Americans don’t perceive hatchbacks as premium cars, dooming it to an early grave. Paying over $50,000 for a midsize, two-row VW SUV seemed like a good idea to a few people, only that group was so few this model didn’t exactly light up North American sales. The rest of the world is getting a new generation of the Touareg, while our market gets the far more affordable and larger Atlas, which also has a much less confusing name. The smallest car in America is a goner. Well, it’s kind of dead, because while the gas version is dead, the new purely electric Fortwo is left. It drives smoother and overall better, plus turning this Smart into an electric car just makes more sense. After all, who takes the Fortwo out on a long-range road trip? Enthusiasts are never going to stop crying about this one, unless they’re Corvette fanboys. Few American vehicles have ever had the swagger that the Viper commanded with authority. It was a beast from the beginning, never relying on forced induction to lay down solid performance figures and plenty of burned rubber.

When you bought a Dodge Viper, you were getting a highly crafted vehicle. Each one was constructed by hand, with an attention to detail you usually don’t see in a domestic car. Unfortunately, many people who had the budget to afford a Viper chose something more comfortable and tame. We didn’t deserve to have such a raw, unbridled monster in our midst, and now it’s gone. Why the Patriot ever existed was a true mystery. It came out about the same time as the Compass, and both are compact SUVs, so they were essentially competitors. People jokingly called them the “Compatriot.” What’s more, if you’ve spent time in a Patriot, you know the feeling of rolling down the road in an oversized plastic Easter egg with wheels.

This vehicle also didn’t live up to the Jeep image of outdoor freedom. While not every model is Trail Rated, the Patriot was obviously rated for going over speed bumps and that’s about it. It’s no mystery why sales suffered. Jeep finally decided to turn the Compass into a more hardcore SUV, and that meant the Patriot had to go. With Nissan now in charge as Mitsubishi’s new owner, the order of the day is SUVs, SUVs, and more SUVs. That means we say goodbye to the Lancer, probably forever. The shockingly cheap Mirage will be the only Mitsubishi car left in North America, which is good and bad, depending on how you look at it.

The high-performance, rally-bred Evolution, which was based on the Lancer, was the most shocking death. The rest of the Lancer lineup wasn’t bad, but it lacked a compelling spark that would’ve made it more compelling to buyers, especially when stacked up against the Mazda3, Civic, etc. Yes, Mitsubishi could’ve created a new generation that channeled such excitement, but the powers-that-be decided SUVs are more worthy of the investment. There are turkeys and then there are turkeys. The Chrysler 200 walked into a gun fight with a butter knife, and it got pummeled by the better-designed midsize sedan competition. This car never capture much market share or sales, so its death wasn’t much of a shock.

Even Sergio Marchionne, CEO of Fiat Chrysler Automobiles, railed on the design of this sedan. He noted that the backdoor openings are designed so passengers have to make a real effort to not hit their head. Marchionne called his designers “dummies” for copying the Hyundai Sonata’s roofline, which suffers from the same flaw. Instead of a redesign, FCA decided to concentrate on its SUVs, trucks, and muscle cars. If you think the sedan market is down, you should take a look at the sales figures for coupes. Some people are still buying luxury models, but something like the Accord is just not that attractive these days. Heck, even the current Accord Sedan has been struggling to sell, with inventory building on dealer lots.

Wisely, Honda decided to put the Accord Coupe out to pasture. While it was the right decision, nobody who likes to drive will enjoy the result. The Accord Coupe V-6 with a manual transmission was shockingly fun to drive, and nobody else on the road would suspect a thing. This is another affordable “performance” car that’s dead, draining more joy out of driving. If you were on the search for cheap luxury, the Azera wasn’t a bad choice. It was a definite upgrade from the Sonata, but with the Genesis brand emerging, this full-size sedan got the shaft. That, and sedan sales in general have been sliding in North America.

To be honest, you can’t blame Hyundai for dumping the Azera. If you didn’t even know this sedan existed, you’re forgiven. There wasn’t much marketing around it, and as a result it got pummeled by the likes of the Toyota Avalon and Chrysler 300. If people did look at it, the car was a backup option, just in case they didn’t like their primary choices. Guess how that worked out? Had this been a full-size, quasi-luxury SUV, sales would’ve likely been booming. This was yet another German “four-door coupe” that looked like it would be a hit when it debuted. After all, similar models from Audi, BMW, and Mercedes-Benz have done extremely well. But, it seems that nobody wanted such a vehicle from a more budget-friendly brand.

If you want a CC, your local dealer might still have a few that are brand new. At one point there were dealers practically begging people to buy this car. The replacement VW, called the Arteon, is based on the MQB platform and channels much of the same grace as Audi, so maybe it will be a big hit. Expect to see the Arteon on lots this summer.

Continue Reading
You may also like...
Related Topics:Ford, Nissan