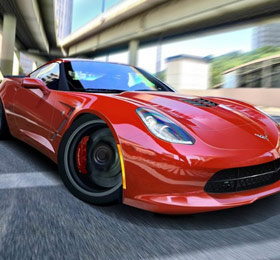 Back when the C1 Corvette was first introduced it came with a six cylinder engine that pumped out a measly amount of power, even though the car’s curb weight was low thanks to a fiberglass body. The Corvette was almost canned by General Motors because of poor sales, but the automaker decided to listen to feedback from automotive enthusiasts and try a V8 engine in the car. Of course the rest was history as America’s sports car gained a humongous following thanks to its good looks and breathtaking performance.

General Motors obviously remembers the lesson learned with the C1 since the 2014 Chevrolet Corvette Stingray or C7 comes with a healthy power bump versus the C6, a car that provided plenty of performance bang for the buck. GM is upping the performance ante with a carbon fiber hood and a Drive Mode Selector feature that changes up to 12 of the car’s attributes with the push of a button.

Just how big of a power bump is the C7 Corvette receiving? Remember that the Stingray comes with an all-new Gen V 6.2-liter pushrod V8 engine, called the LT1, which has been engineered for efficient and potent operation. Peak output has been announced at 455 horsepower and 460 pound-feet of torque. That’s a big improvement over the 430 horsepower and 424 pound-feet of torque from the previous generation of the Corvette. The engine works with a new seven-speed manual transmission that features rev-match technology for further improved performance.

The car’s power increase means the 2014 Corvette Stingray will be the most powerful base Corvette ever produced. Of course GM is expected to come out with high-performance variants of the C7, just like the ZO6 and ZR1 versions of the C6, but nothing official has been announced yet. It might take a production year or two of the C7 before GM decides to unleash a totally insane version of the C7 ‘Vette on the public. For now enthusiasts will have to be content with the Z51 Performance Package that makes the car more track-ready with features like a dry-sump oiling system, an aero package and an electronic limited-slip differential.

Early performance estimates for the 2014 Corvette Stingray include that the car will accelerate from 0 to 60 mph in less than four seconds. Even with all of the extra power the car is also expected to best the C6’s impressive 26 mpg highway fuel mileage, meaning taking the ‘Vette on the open road will still be a realistic option.

In addition to the carbon fiber hood, GM is using other technologies to keep the Corvette’s curb weight down. Several body components are made of composite materials, such as the front fenders, doors and rear quarter panels. On coupe models owners can remove panels from the roof to further drop the car’s weight. Underbody panels are made of a carbon-nano composite. GM engineers also produced an aluminum frame and repositioned the engine so the Corvette has a 50/50 weight balance for optimal handling characteristics.

The 2014 Chevrolet Corvette Stingray still provides some incredible performance for the dollar, just like previous generations of the ‘Vette. Despite rumors that GM was contemplating charging significantly more for the C7, car shoppers can pick one up in the neighborhood of $52,000. That’s a serious deal on a car that can run with other performance vehicles that cost twice that price.